In 2019, the U.S. Food and Drug Administration (FDA) approved just 42 new drugs. This drop-off, compared to 2018 when 59 new drugs were approved, unsurprisingly led some pharma industry analysts to rekindle recent concerns over an innovation crisis.
However, when one looks beyond strictly the number of approvals more deeply into the drugs themselves, there is actually significant evidence to the contrary. In fact, it appears that from a chemical structure perspective, innovation in drug discovery is not only thriving but also delivering measurable therapeutic and commercial benefits.
A new way to look at the state of pharma innovation
Based on an analysis of the new drugs approved by the FDA, small molecules continue to be an important drug modality, as they once again represented a majority of the approved new therapeutic drugs (not including diagnostic imaging agents) in 2019. Recent studies1 have shown that the exploration of chemical space is proceeding along two tracks: the re-use of known structural cores (resulting in molecules with some structural similarity to previous ones) and the creation of new structural cores (producing structurally novel molecules). A majority of the recently approved small-molecule drugs followed the latter track, as they included at least one structurally novel new molecular entity (NME) whose structural core was not used in any previously FDA-approved drugs.
Balancing innovation with efficiency is a longstanding challenge in drug discovery. A typical drug discovery project only has the budget and time to synthesize and assay fewer than 10,000 molecules. With the number of potentially synthesizable organic molecules estimated to be 10180 (for those below 1000 Da.), efficiently exploring the vastness of chemical space is beyond the reach of current experimental approaches. However, exploring such a limited percentage of potential molecules obviously results in missed opportunities when seeking to identify the most promising novel drug-like molecules.
A structurally novel drug candidate can be much more impactful to a drug discovery project than the identification of many close analogues of a known molecule. As proof of that point, we can look to drugs designated as breakthrough therapies. Utilizing the breakthrough therapy designation (BTD) as a proxy of a drug’s potential impact on public health, analysis shows that structurally novel small-molecule drugs are more likely to be the source of promising new therapies. This suggests biopharma organizations’ impact on global health would benefit significantly from adopting technology-driven approaches that support more efficient and far-reaching exploration of deep chemical space.
BTD: The real-world impact of structural novelty
Breakthrough Therapy Designation was introduced in 2012 to help shorten the development and review time of promising new therapies intended to treat a serious or life-threatening disease for which there is unmet medical need, and for which there is evidence to demonstrate a potential substantial improvement on a clinically significant endpoint compared with other available therapies. Once a drug is designated as a breakthrough therapy, the FDA will expedite the development and review process in order to reduce the drug’s time to market. Receiving BTD status is undoubtedly challenging, as evidenced by the 60-percent 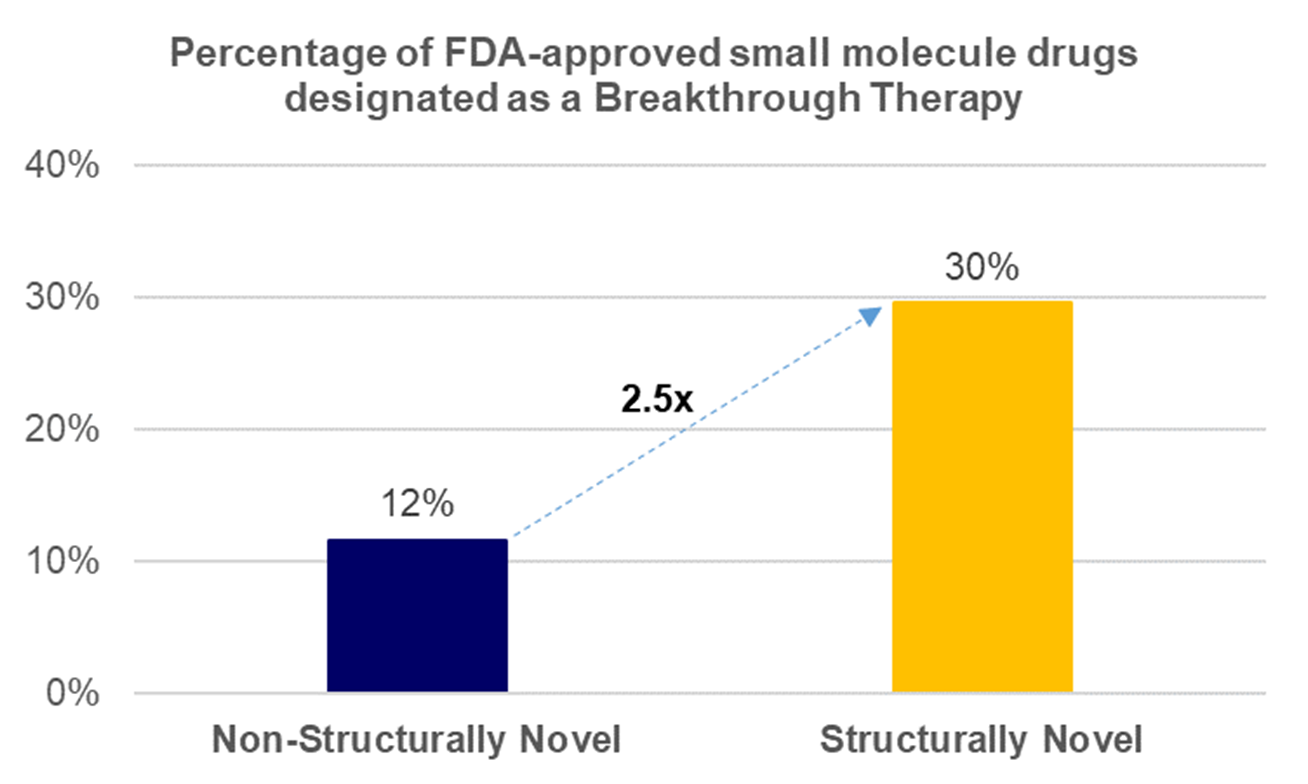 rejection rate for BTD applicants; however, the designation brings with it both public health and commercial benefits.
Studies have found that in addition to review periods being shortened by around three months, BTD drugs will spend two to three years less in pre-market development compared with non-BTD drugs.2,3 Furthermore, receiving this designation provides some credibility to the clinical promise of a given product and, as a result, adds significant value to a company. In fact, our analysis of publicly announced BTD grants found that the stock of publicly traded companies without any marketed products rose by an average of 6 percent (in excess of market returns) the day after BTD was announced.
Between 2013 and 2019, 73 (26 percent) of the 276 new therapeutic drugs approved by the FDA’s Center for Drug Evaluation and Research were granted breakthrough drug status. Almost 60 percent of these were small-molecule drugs, over 80 percent of which included at least one structurally novel NME. However, this does not tell the complete story. Taking a deeper look, we find structurally novel, small-molecule drugs are 2.5 times more likely to be designated as breakthrough therapies—30 percent of the structurally novel small-molecule drugs achieve breakthrough status, compared to only 12 percent of the non-structurally novel small-molecule drugs (Figure 1). This gap highlights the differential impact of structural novelty.
Technology accelerating exploration to find more new drugs
The critical need to increase the speed and efficiency of drug development is underscored by the current COVID-19 pandemic. Though this unprecedented global crisis has put a keen focus on the importance of accelerating pharmaceutical innovation, the reality is that there are people waiting for treatments to address serious conditions every day, making the importance of continuing to push deeper into chemical space clear. That said, figuring out which areas of chemical space offer the greatest potential for a particular need remains a critical challenge. As a specialist in scientific information solutions, helping pharmaceutical scientists maximize the efficiency of that exploration is a key focus area for CAS.
There are a number of technology-driven approaches emerging that we expect will have a significant impact on the pace of structural innovation over the next few years. Advanced chemical analytics can provide a detailed map of the existing landscape. Knowing what areas are widely explored and under-explored guides scientists in navigating the known regions of chemical space and improves their odds of success by identifying promising areas with limited activity to date. A clearer view of the current landscape on a structural level also informs emerging efforts to leverage machine learning to accelerate innovation by identifying new biologically relevant regions of chemical space containing structurally novel drug-like molecules.
Machine learning is one of the primary in-silico methods that many biopharma organizations have attempted to deploy over the last several years. Machine learning algorithms require input data—referred to as a training set—to build a predictive model. To a great extent, machine learning algorithms are only as good as the training data sets on which they are based. Therefore, more and better training data is an obvious way to improve an algorithm’s prediction accuracy.
Molecular descriptors also play an essential role in the performance of machine learning algorithms in chemistry-related applications. Molecular fingerprints are a common way to encode the structure of a molecule in a form that is amenable for machine learning. In a series of validation tests using common predictive machine learning algorithms, the accuracy achieved with a new molecular fingerprint developed by CAS scientists outperformed the commonly used Morgan fingerprint by up to 45 percent.4 These fingerprints are being used by CAS in drug discovery consulting projects that incorporate machine learning to predict properties of drug-like molecules. Improved property predictions reduce the number of molecules that must be synthesized for testing. As a result, resources can be focused on synthesizing and assaying candidates with more optimal drug-like properties. The resulting more structurally diverse candidate pools provide a better selection of molecules, increasing the odds of finding more effective drug candidates.
As these advancements help drug hunters push the boundaries to find structurally novel small-molecule drugs, it will empower them to more efficiently seek out and assess the highest-potential opportunities from a wider set of structural possibilities. Based on the aforementioned odds, the resulting structurally novel small-molecule drugs are more likely to be the source of promising new breakthrough therapies. The result will hopefully be a virtuous cycle that will incentivize others to venture deeper into chemical space, causing a more rapid advance of public health and driving incremental growth in innovation.
Todd Wills is managing director of CAS
References
Mar 14, 2019

Guest Commentary: A tale of safety and consistency

Guest Commentary: A tale of safety and consistency

Guest Commentary: From Prop. 71 to CAR-T and beyond: Enabling another 15 years of patient-centric innovation

Guest Commentary: From Prop. 71 to CAR-T and beyond: Enabling another 15 years of patient-centric innovation