Researchers from Iceland to Brazil investigate the healing powers of fish skin, providing a low-cost and improved solution for treating wounds.

The secret to wound healing may be swimming in the sea. From Nordic cod to Egyptian tilapia, researchers around the world are studying the beneficial effects of fish skin for treating skin wounds.

Damage to the skin can arise from any number of places: a deep cut, burn, or chronic wounds due to diabetes or limb amputation. The current gold-standard for healing serious wounds is a human skin graft. During this process the recipient’s skin cells have a human skin scaffold on which to grow and differentiate, thus helping close the wound.

Human skin for wound treatment is expensive, and to prevent disease transmission, it must be intensely processed with detergents that often remove many of the beneficial lipids that speed up healing.

Fish skin, with its surprising molecular similarity to human skin, low cost to obtain, and fast healing process, may be a better solution for treating some of the toughest wounds. Scientists and clinicians have used fish skin to treat intense burns and chronic diabetes wounds. Fish skin, which would otherwise be thrown away when processing fish for food, also presents a sustainable treatment method that is accessible to communities around the world.

Electron microscope images of fish skin and human skin show that the two are quite similar. While fish and humans may be separated by hundreds of million years of evolutionary distance, it seems that skin didn’t change too much over the course of history.

“The skin in the fish has epidermis, dermis, cutaneous layer, and so on, which is the same as in humans,” said Fertram Sigurjonsson, the founder and CEO of the fish skin biotech company, Kerecis. “It's the same thickness, same elasticity, [and] same porosity.”

Kerecis uses the skin of wild Arctic cod caught off the coast of the small fishing town of Isafjordur, Iceland. They use arctic cod because the fish can be caught year-round, and because the fish are wild, they have not been exposed to any antibiotics or vaccines like fish from fish farms are, which might affect the human recipient.

To prepare their cod skin grafts, the Kerecis team removes the scales and cells from the skin, which leaves holes where the cells were. They then remove all the liquid from the skin and sterilize it. When a doctor applies the fish skin graft onto a wound, the human skin cells begin to proliferate into the fish skin, closing the wound.

“All these holes that used to be populated by fish cells, they will be populated by the patient's own cells. And [the patient’s cells] think they're at home, so they start to divide and proliferate and make a new tissue,” Sigurjonsson said.

With its FDA approval in 2015, doctors all over the world now use Kerecis’ fish skin graft to treat patients with chronic wounds. “Fish skin is becoming a known thing in wound care,” said Sigurjonsson, but “I remember our first medical conference. People just laughed, 'What, fish skin? C'mon!'”

Researchers at Brazil’s Tilapia Skin Project are also turning skeptics into believers. The investigational group of more than 200 researchers studies the skin of the warm water fish Nile tilapia to make a wound dressing for burns and certain surgical procedures.

While the entire country of Brazil only has four human skin banks, they have a lot of tilapia. One day, plastic surgeon Marcelo Borges read in his local paper about purses and shoes made from tilapia skin.

“He had the idea of using tilapia skin as a biological bandage to cover wounds,” said Carlos RK Paier, the preclinical R&D coordinator of the Tilapia Skin Project, in an email. “Ninety-nine per cent of the Brazilian tilapia skin production is discarded, [so] the chance of manufacturing a cheap alternative from this waste byproduct strengthened the idea too.” 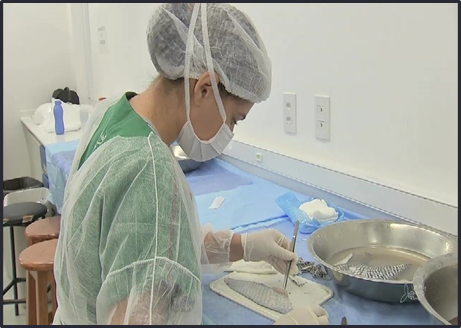 Borges recruited Odorico Moraes, a pharmacologist from Federal University of Ceará, and Edmar Maciel, a surgeon who specialized in burn injuries at the Burn Patient Support Institute, among many other researchers, to investigate tilapia skin  for wound treatment. They wondered if it might offer better healing than the standard wound dressings used in Brazil: silver sulfadiazine ointment or silver-impregnated sodium carboxymethylcellulose (NaCMC-Ag) foam.

To prepare the tilapia skin for use on patients, the team washes it and removes any residual muscle or tissue. They thoroughly clean the skin and lyophilize it to remove the residual liquid, at which point it is sterilized by irradiation. How exactly tilapia skin helps heal wounds is not yet understood, but the researchers think that the fish skin may help the human skin cells orient themselves and promote tissue regeneration.

At first, patients found the idea of dressing their burns with tilapia skin a bit strange, but Moraes said, “when we put it [on], they immediately find a relief of the pain. And they say it's a miracle.”

In a recent clinical trial, the team found that treating burns with lyophilized tilapia skin led to fewer dressing changes than with the standard NaCMC-Ag foam treatment (1). Tilapia skin adhered to the wound well, prevented fluid loss, and kept it safe from infection. In fact, Moraes reported that none of the more than 300 patients his team treated with tilapia skin became infected.

As scientists dig into the benefits of fish skin for healing wounds, we’ll likely see even more of our aqueous friends splashing into the clinic.

Insulin ditches needles and hitches a ride in cage-like carriers

Insulin ditches needles and hitches a ride in cage-like carriers