CRISPR (an acronym for clustered regularly interspaced short palindromic repeats), which is part of a system for altering chromosomal sequences in situ in a cell in combination with a bacterially derived protein called Cas9, has been hailed as the “Breakthrough of the Year” for 2015, and rightfully so. CRISPR provides a mechanism for inserting or deleting specific DNA sequences using CRISPR-associated targeting RNAs and the Cas9 RNA-guided DNA endonuclease enzyme. It provides for the first time the type of specificity for altering DNA that the polymerase chain reaction (PCR) provided a generation ago for amplifying specific DNA, as illustrated by this schematic: 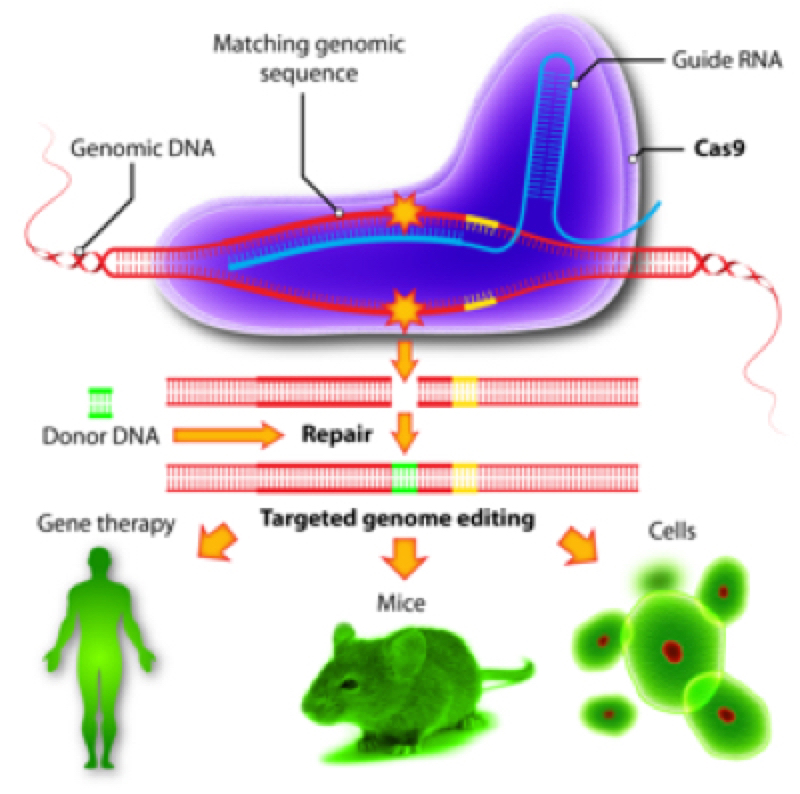 Given the commercial potential of this method, patenting is an obvious concern and, as it turns out, more than one group of inventors has filed patent applications on the reagents, methods and cells produced or used to produce CRISPR modifications. Because these applications were filed prior to March 16, 2013, the inventor(s) who first invented this invention have the right to patent it, and disputes regarding who was the first to invent are resolved using a procedure called an interference.
On Jan. 11, 2016, the U.S. Patent and Trademark Office (PTO)declared Interference No. 106,048 under the provisions of 37 C.F.R. § 41.203(b), naming Feng Zhang and his colleagues, the named inventor of The Broad Institute/MIT’s patents, as the Junior Party, and Jennifer Doudna and her colleagues at University of California, Berkeley, as Senior Party. These designations stem from which party was the first to file a patent application and are important, because (without evidence to the contrary) the PTO considers the Senior Party to be the presumptive inventor (and thus the burden to establish prior right based on earlier invention is borne by the Junior Party).
The Broad Institute/MIT inventors have obtained a number of patents even though the UC Berkeley inventors have the earliest filing date and no issued patents (which is important because an interference cannot resolve the dispute between patents granted on the same invention). This is because the Broad availed itself of priority examination (“fast track”) provisions of the law. UC Berkeley has only one pending application involved in the interference.
In an interference, the PTO establishes one or more “counts,” which is a phantom claim that encompasses the interfering subject matter. The parties provide evidence of conception of at least one embodiment falling within the scope of the count and reduction to practice (actual or constructive, i.e., by filing a patent application having an enabling disclosure of said one embodiment). While there are several complicated scenarios that can arise in an interference, generally a party that conceived first and reduced to practice first, and did not abandon, suppress or conceal the invention, will prevail. The sole count in the CRISPR interference reads as follows:
Count 1
A method, in a eukaryotic cell, of cleaving or editing a target DNA molecule or modulating transcription of at least one gene encoded thereon, the method comprising:
contacting, in a eukaryotic cell, a target DNA molecule having a target sequence with an engineered and/or non-naturally-occurring Type II Clustered Regularly lnterspaced Short Palindromic Repeats (CRISPR)-CRISPR associated (Cas) (CRISPR-Cas) system comprising:
a) a DNA-targeting RNA comprising
i) a targeter-RNA or guide sequence that hybridizes with the target sequence, and
ii) an activator-RNA or tracr sequence that hybridizes with the targeter-RNA to form a double-stranded RNA duplex of a protein-binding segment, and
b) a Cas9 protein,
wherein the DNA-targeting RNA forms a complex with the Cas9 protein, thereby targeting the Cas9 protein to the target DNA molecule, whereby said target DNA molecule is cleaved or edited or transcription of at least one gene encoded by the target DNA molecule is modulated.
The interference will proceed in two stages. The first stage involves the parties presenting motions that can modify the count, have certain claims declared outside the scope of the count (or vice-versa), and ask for a finding that the claims are invalid under any of the provisions of the patent statute. The Patent Trial and Appeal Board (PTAB) has made its decision regarding the motions each party will be able to bring, authorizing several motions for each party; these motions will be decided by the end of 2016.
If these motions are not decided in a way that would disqualify one or both parties, then the interference will move to a second stage, where the Junior Party (The Broad) will present its proofs of conception and reduction to practice and the Senior Party will be permitted to oppose. The Senior Party is under no obligation to present proofs earlier than its earliest filing date unless the Junior Party evinces evidence of (at least) earlier conception. In practice, the parties can both be expected to submit their evidence.
The parties can also settle the inference privately, with the losing party filing a Concession of Priority and the prevailing party (usually) granting a license to the loser; such settlement agreements are kept confidential but must be filed. Otherwise, everything else in an interference is public information and can be found on the PTO’s website here. Office rules mandate the times for these two stages and an interference is usually concluded with a decision (if not earlier settled) within 36 months of the declaration.
Kevin Noonan is a partner with the law firm McDonnell Boehnen Hulbert & Berghoff LLP and represents biotechnology and pharmaceutical companies on a myriad of issues. A former molecular biologist, he is also the founding author of the Patent Docs weblog, http://patentdocs.typepad.com/.
Feb 24, 2021|4 min read