SAN ANTONIO—A team of researchers from the University of Texas at San Antonio (UTSA) Neurosciences Institute is challenging the long-held belief that the organization of the cortical circuit of GABAergic neurons is exclusively local. The results of their study hold promise for new treatments for patients with epilepsy, post-traumatic stress disorder, schizophrenia and other mental conditions in which GABAergic neurons play a significant role.

In the past, labeling individual neurons allowed researchers to study the neurons that project from the brain’s cortex to the striatum, suggesting that the pathways are exclusively excitatory. For this reason most people assumed that inhibition must occur when excitatory cortical neurons activate intrastriatal inhibition.

UTSA College of Sciences researchers Alice Bertero, Hector Zurita and Marc Normandin and biology associate professor Alfonso Junior Apicella contested this view by providing anatomical and physiological evidence for the existence of long-range parvalbumin-expression neurons from the cortex to the striatum in the brains of mice.

This finding is an essential step toward better understanding the neuronal mechanism of cortical long-range GABAerginc neurons in healthy and diseased brains.

“Daily we are bombarded by multiple auditory stimuli, including various speeches,” states Apicella in the UTSA’s University Communications & Marketing publication. “Particularly, listeners must determine which speech acoustic features are relevant and generalize across irrelevant ones during speech perception.

“We think that the interaction between the cortex and the striatum is fundamental to optimize non-native speech learning in adulthood. Therefore, it is crucial to determine which of the cortical-striatum pathway’s cellular elements are involved in this process.”

The discovery that the striatum receives both excitatory and inhibitory inputs from the cortex suggests that these inputs’ timing and relative strength can modulate the striatum’s activity. This is important because it invites the scientific community to speculate that the long-range parvalbumin-expressing projects could play a role between the auditory cortex and striatum, through gamma oscillation synchronization.

Only recently has it been demonstrated that long-range GABAergic cortico-striatal somatostatin-expressing neurons in the auditory cortex project to the dorsal striatum, and functionally inhibit the main projecting neuronal population, the spiny projecting neuron, according to the article.

Since the late 19th century, the Spanish neuroanatomist Santiago Ramon y Cajal postulated the importance of interneurons in the neocortex, states the article introduction. After observing and studying the neuronal diversity and anatomy in several mammalian species, Cajal concluded that, “the functional excellence of the human brain is intimately linked to the prodigious abundance and unwonted wealth of forms of the so-called neurons with short axon” (i.e., GABAergic interneurons).

Since then, the local connectivity and neuronal computations of GABAergic “interneurons” in the cerebral cortex, which comprise 15 to 20 percent of the whole neuronal population, have been extensively studied. This led to the overall principle that excitation is both local and long-range, while inhibition is described as being exclusively local. The existence of long-range GABAergic neurons in rats, cats and monkey has been proven anatomically since the 1980s.

However, only recent investigation has been engaged to understand the functional significance of long-range GABAergic neurons and how different subtypes play distinct roles in cortical processing, according to their differences in morphology, electrophysiology, molecular content and synaptic connectivity patterns.

“Evidence from our lab and others showed a direct inhibitory projection from the cortex to the striatuma basal ganglia area that is involved in the movement, reward-learning and action selection behavior, demonstrated that locomotion could be modulated through direct stimulation of long-range GABAergic neuron terminals in the motor striatum,” the researchers state.

They have proposed that future experiments “will provide further insight into the role of the CS-Parv neurons in timing and ratio of excitation and inhibition, two opposing forces in the mammalian cerebral cortex, that can dynamically affect the cortico-striatal dynamic.” 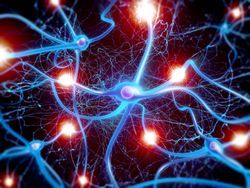