The world finally has a defense against the SARS-CoV-2 virus, which has claimed the lives of millions and shuffled day-to-day life to the confines of home: a vaccine. Several SARS-CoV-2 vaccines exist and are now available to not only frontline workers, but the population at large. 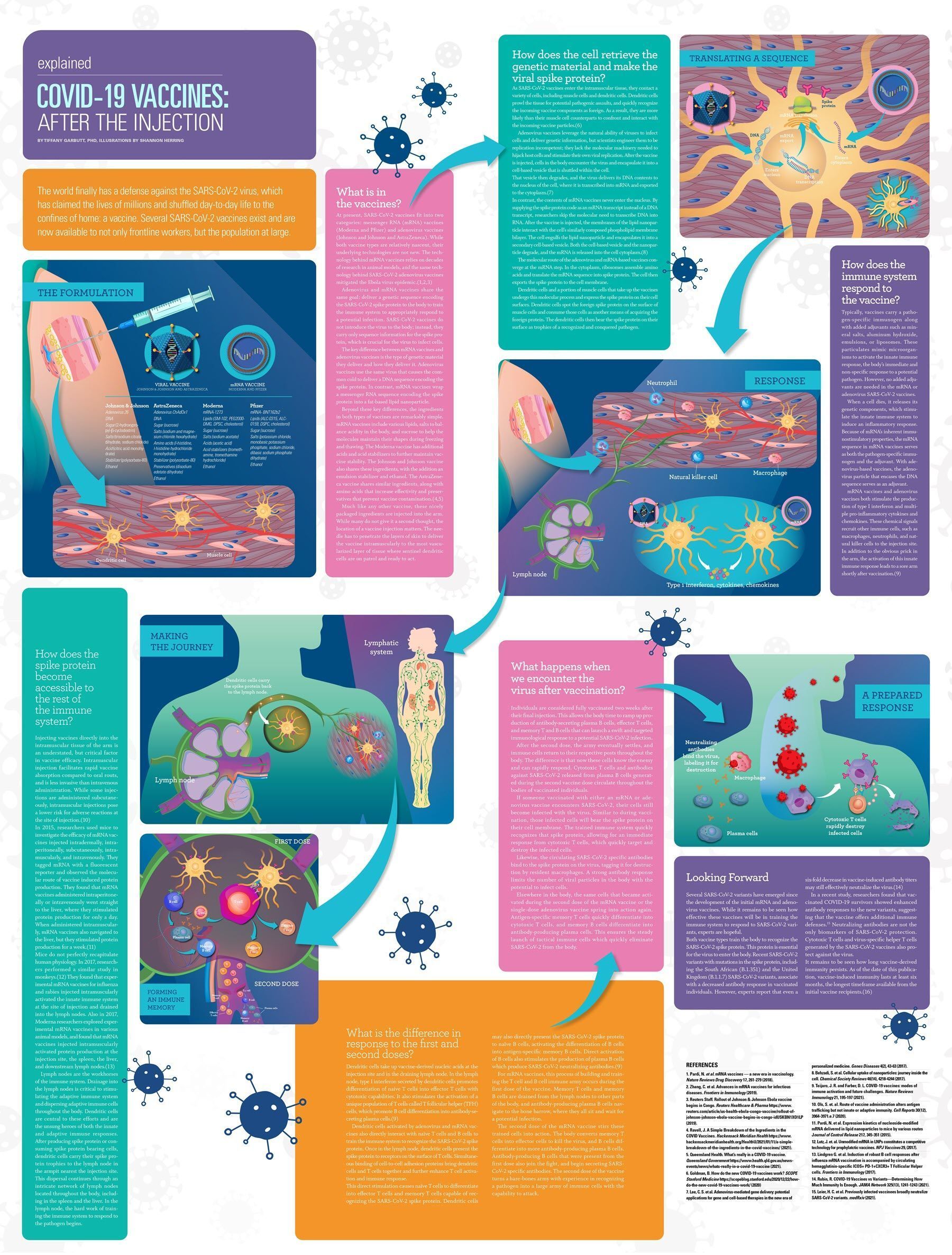 What is in the vaccines?

At present, SARS-CoV-2 vaccines fit into two categories: messenger RNA (mRNA) vaccines (Moderna and Pfizer) and adenovirus vaccines (Johnson and Johnson and AstraZeneca). While both vaccine types are relatively nascent, their underlying technologies are not new. The technology behind mRNA vaccines relies on decades of research in animal models, and the same technology behind SARS-CoV-2 adenovirus vaccines mitigated the Ebola virus epidemic (1-3). 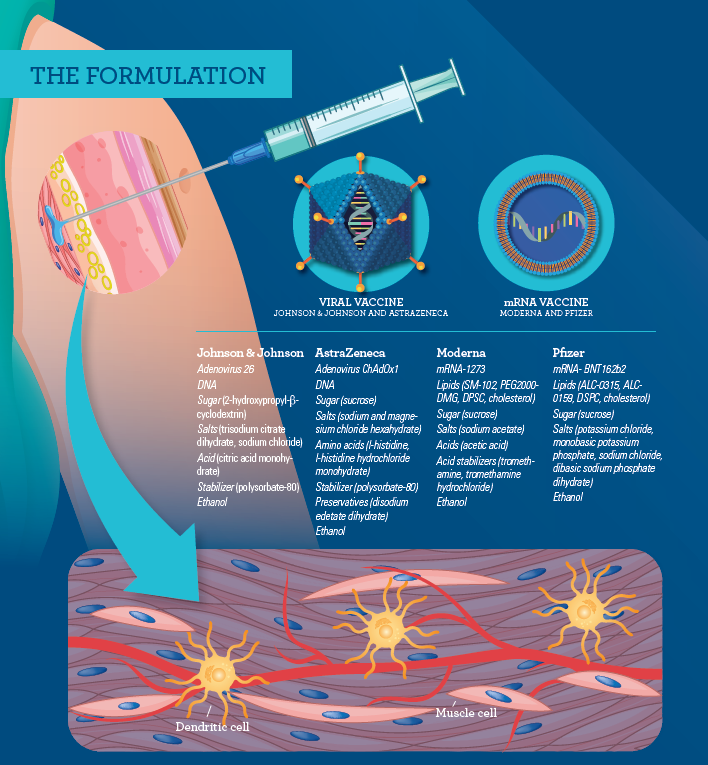 Beyond these key differences, the ingredients in both types of vaccines are remarkably simple. mRNA vaccines include various lipids, salts to balance acidity in the body, and sucrose to help the molecules maintain their shapes during freezing and thawing. The Moderna vaccine has additional acids and acid stabilizers to further maintain vaccine stability. The Johnson and Johnson vaccine also shares these ingredients, with the addition an emulsion stabilizer and ethanol. The AstraZeneca vaccine shares similar ingredients, along with amino acids that increase effectivity and preservatives that prevent vaccine contamination (4, 5).

Much like any other vaccine, these nicely packaged ingredients are injected into the arm. While many do not give it a second thought, the location of a vaccine injection matters. The needle has to penetrate the layers of skin to deliver the vaccine intramuscularly to the most vascularized layer of tissue where sentinel dendritic cells are on patrol and ready to act.

How does the cell retrieve the genetic material and make the viral spike protein?

As SARS-CoV-2 vaccines enter the intramuscular tissue, they contact a variety of cells, including muscle cells and dendritic cells. Dendritic cells prowl the tissue for potential pathogenic assaults and quickly recognize the incoming vaccine components as foreign. As a result, they are more likely than their muscle cell counterparts to confront and interact with the incoming vaccine particles (6). 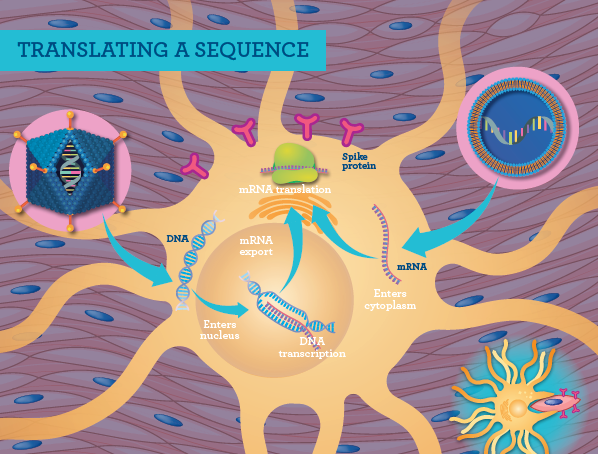 Adenovirus vaccines leverage the natural ability of viruses to infect cells and deliver genetic information, but scientists engineer them to be replication incompetent; they lack the molecular machinery needed to hijack host cells and stimulate their own viral replication. After the vaccine is injected, cells in the body encounter the virus and encapsulate it into a cell-based vesicle that is shuttled within the cell. That vesicle then degrades, and the virus delivers its DNA contents to the nucleus of the cell, where it is transcribed into mRNA and exported to the cytoplasm (7).

In contrast, the contents of mRNA vaccines never enter the nucleus. By supplying the spike protein code as an mRNA transcript instead of a DNA transcript, researchers skip the molecular need to transcribe DNA into RNA. After the vaccine is injected, the membranes of the lipid nanoparticle interact with the cell’s similarly composed phospholipid membrane bilayer. The cell engulfs the lipid nanoparticle and encapsulates it into a secondary cell-based vesicle. Both the cell-based vesicle and the nanoparticle degrade, and the mRNA is released into the cell cytoplasm (8). The molecular route of the adenovirus and mRNA-based vaccines converge at the mRNA step. In the cytoplasm, ribosomes assemble amino acids and translate the mRNA sequence into spike protein. The cell then exports the spike protein to the cell membrane. Dendritic cells and a portion of muscle cells that take up the vaccines undergo this molecular process and express the spike protein on their cell surfaces. Dendritic cells spot the foreign spike protein on the surface of muscle cells and consume those cells as another means of acquiring the foreign protein. The dendritic cells then bear the spike protein on their surface as trophies of a recognized and conquered pathogen.

How does the immune system respond to the vaccine?

Typically, vaccines carry a pathogen-specific immunogen along with added adjuvants such as mineral salts, aluminum hydroxide, emulsions, or liposomes. These particulates mimic micro-organisms to activate the innate immune response, the body’s immediate and non-specific response to a potential pathogen. However, no added adjuvants are needed in the mRNA or adenovirus SARS-CoV-2 vaccines.

When a cell dies, it releases its genetic components, which stimulate the innate immune system to induce an inflammatory response. Because of mRNA’s inherent immunostimulatory properties, the mRNA sequence in mRNA vaccines serves as both the pathogen-specific immunogen and the adjuvant. With adenovirus-based vaccines, the adenovirus particle that encases the DNA sequence serves as an adjuvant. 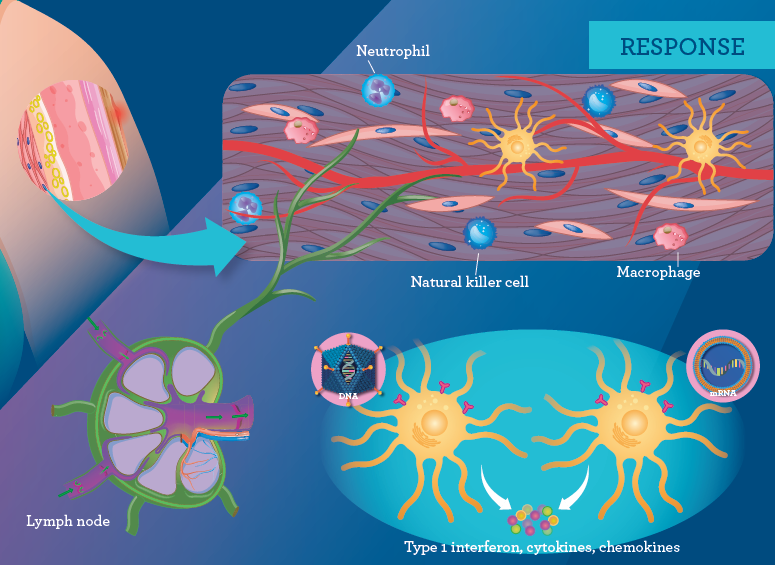 mRNA vaccines and adenovirus vaccines both stimulate the production of type I interferon and multiple pro-inflammatory cytokines and chemokines. These chemical signals recruit other immune cells, such as macrophages, neutrophils, and natural killer cells to the injection site. In addition to the obvious prick in the arm, the activation of this innate immune response leads to a sore arm shortly after vaccination (9).

How does the spike protein become accessible to the rest of the immune system?

Injecting vaccines directly into the intramuscular tissue of the arm is an understated, but critical factor in vaccine efficacy. Intramuscular injection facilitates rapid vaccine absorption compared to oral routes and is less invasive than intravenous administration. While some injec­tions are administered subcutane­ously, intramuscular injections pose a lower risk for adverse reactions at the site of injection (10). 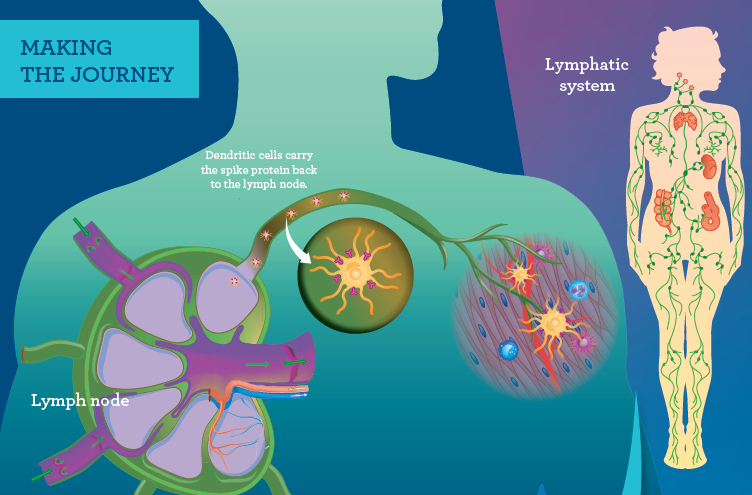 In 2015, researchers used mice to investigate the efficacy of mRNA vac­cines injected intradermally, intra­peritoneally, subcutaneously, intra­muscularly, and intravenously. They tagged mRNA with a fluorescent reporter and observed the molecu­lar route of vaccine-induced protein production. They found that mRNA vaccines administered intraperitone­ally or intravenously went straight to the liver, where they stimulated pro­tein production for only a day. When administered intramuscularly, mRNA vaccines also navigated to the liver, but they stimulated protein pro­duction for a week (11).

Mice do not perfectly recapitulate human physiology. In 2017, research­ers performed a similar study in mon­keys (12). They found that experimental mRNA vaccines for influenza and rabies injected intramuscularly acti­vated the innate immune system at the site of injection and drained into the lymph nodes. Also in 2017, Mod­erna researchers explored experimen­tal mRNA vaccines in various ani­mal models and found that mRNA vaccines injected intramuscularly activated protein production at the injection site, the spleen, the liver, and downstream lymph nodes (13).

What is the difference in response to the first and second doses?

Dendritic cells take up vaccine-derived nucleic acids at the injection site and in the draining lymph node. In the lymph node, type I interferon secreted by dendritic cells promotes differentiation of naive T cells into effec­tor T cells with cytotoxic capabilities. It also stimulates the activation of a unique population of T cells called T follicular helper (TFH) cells, which promote B cell differentiation into antibody-secreting plasma cells (9).

Dendritic cells activated by adenovirus and mRNA vaccines also directly interact with naïve T cells and B cells to train the immune system to recognize the SARS-CoV-2 spike protein. Once in the lymph node, dendritic cells present the spike protein to receptors on the surface of T cells. Simultaneous binding of cell-to-cell adhesion proteins bring dendritic cells and T cells together and further enhance T cell activation and immune response. 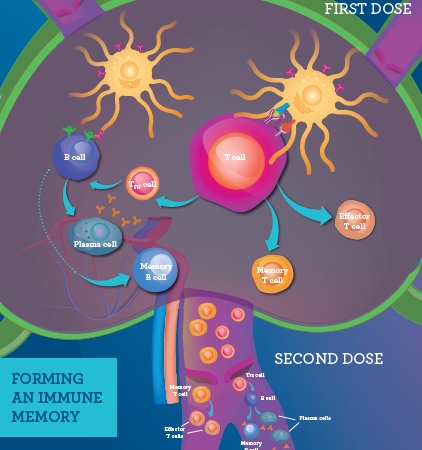 This direct stimulation causes naïve T cells to differ­entiate into effector T cells and memory T cells capable of recognizing the SARS-CoV-2 spike protein. Dendritic cells may also directly present the SARS-CoV-2 spike protein to naïve B cells, activating the differentiation of B cells into antigen-specific memory B cells. Direct activation of B cells also stimulates the production of plasma B cells which produce SARS-CoV-2 neutralizing antibodies (9). For mRNA vaccines, this process of building and training the T cell and B cell immune army occurs during the first dose of the vaccine. Memory T cells and memory B cells are drained from the lymph nodes to other parts of the body, and antibody-producing plasma B cells navigate to the bone marrow, where they all sit and wait for a potential infection. The second dose of the mRNA vaccine stirs these trained cells into action. The body converts memory T cells into effector cells to kill the virus, and B cells differentiate into more antibody-producing plasma B cells. Antibody-producing B cells that were present from the first dose also join the fight and begin secreting SARS-CoV-2 specific antibodies. The second dose of the vaccine turns a bare-bones army with experience in recognizing a pathogen into a large army of immune cells with the capability to attack.

What happens when we encounter the virus after vaccination?

Individuals are considered fully vaccinated two weeks after their final injection. This allows the body time to ramp up pro­duction of antibody-secreting plasma B cells, effector T cells, and memory T and B cells that can launch a swift and targeted immunological response to a potential SARS-CoV-2 infection.

After the second dose, the army eventually settles, and immune cells return to their respective posts throughout the body. The difference is that now these cells know the enemy and can rapidly respond. Cytotoxic T cells and antibodies against SARS-CoV-2 released from plasma B cells generated during the second vaccine dose circulate throughout the bod­ies of vaccinated individuals.

If someone vaccinated with either an mRNA or adeno­virus vaccine encounters SARS-CoV-2, their cells still become infected with the virus. Similar to during vacci­nation, those infected cells will bear the spike protein on their cell membrane. The trained immune system quickly recognizes that spike protein, allowing for an immediate response from cytotoxic T cells, which quickly target and destroy the infected cells.

Likewise, the circulating SARS-CoV-2 specific antibodies bind to the spike protein on the virus, tagging it for destruc­tion by resident macrophages. A strong antibody response limits the number of viral particles in the body with the potential to infect cells.

Elsewhere in the body, the same cells that became acti­vated during the second dose of the mRNA vaccine or the single-dose adenovirus vaccine spring into action again. Antigen-specific memory T cells quickly differentiate into cytotoxic T cells, and memory B cells differentiate into antibody-producing plasma cells. This ensures the steady launch of tactical immune cells which quickly eliminate SARS-CoV-2 from the body. 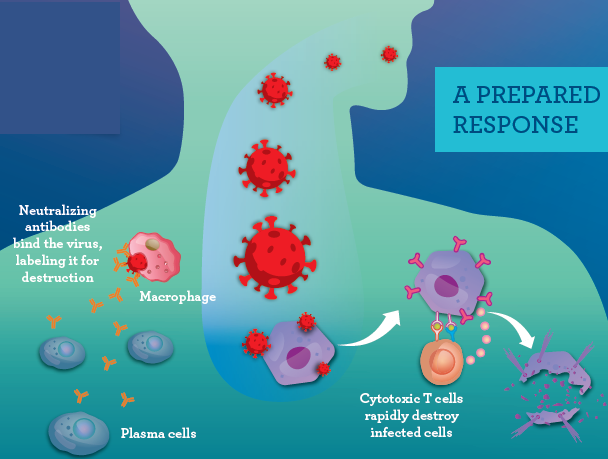 Several SARS-CoV-2 variants have emerged since the development of the initial mRNA and adenovirus vaccines. While it remains to be seen how effective these vaccines will be in training the immune system to respond to SARS-CoV-2 variants, experts are hopeful.

Both vaccine types train the body to recognize the SARS-CoV-2 spike protein. This protein is essential for the virus to enter the body. Recent SARS-CoV-2 variants with mutations in the spike protein, including the South African (B.1.351) and the United Kingdom (B.1.1.7) SARS-CoV-2 variants, associate with a decreased antibody response in vaccinated individuals. However, experts report that even a six-fold decrease in vaccine-induced antibody titers may still effectively neutralize the virus (14).

In a recent study, researchers found that vaccinated COVID-19 survivors showed enhanced antibody responses to the new variants, suggesting that the vaccine offers additional immune defenses (15). Neutralizing antibodies are not the only biomarkers of SARS-CoV-2 protection. Cytotoxic T cells and virus-specific helper T cells generated by the SARS-CoV-2 vaccines also protect against the virus.

It remains to be seen how long vaccine-derived immunity persists. As of the date of this publication, vaccine-induced immunity lasts at least six months, the longest timeframe available from the initial vaccine recipients (16).