Fetuses transfer some of their cells to their mother in a phenomenon called microchimerism.

Out of the approximately 37.2 trillion human cells that make up your body, some of them are not your own.

Of course, you have a menagerie of bacterial cells hanging out everywhere from your gut to your nose to your skin. But the foreign cells in question are not bacteria. They are entirely human.

Very early during development, even before the placenta had the chance to form, your mother transferred a few of her cells to you. And in turn, at just six weeks of gesta­tion, likely before she knew you were even there, you gave some of your cells to her.

This phenomenon — the presence of a small number of genetically foreign cells in an individual — is called microchimerism.

Named for the chimera, a beast from Greek mythology with the head of a lion, body of a goat, and tail of a serpent, microchimerism is “micro” because it refers to a small number of genetically different human cells.

“It can be as rare as one in a million, or as common as one in 100,000 cells,” said Amy Boddy, an evolutionary biologist from the University of California, Santa Barbara.

While pregnancy is the most common source of microchimeric cells, they can also originate from an older sibling, shar­ing a womb with a twin, miscarriage, organ transplantation, or a blood transfusion.  And these cells don’t stay put.

“It seems like there has been no tissue left behind when it comes to microchi­merism. They’ve been found in the brain, lung, heart, breast tissue, bone marrow, immune system, thyroid. You name it, they’ve been found there,” said Boddy.

What exactly are these cells doing, and what impact do they have on maternal health?

Microchimerism offers protection against certain types of cancers and some cardiovascular diseases in women, but it also contributes to the development of autoimmune diseases post-pregnancy. As scientists investigate how microchimerism affects different disease outcomes, this understanding may lead to new treatments for autoimmune diseases and new ways to diagnose diseases like cancer. 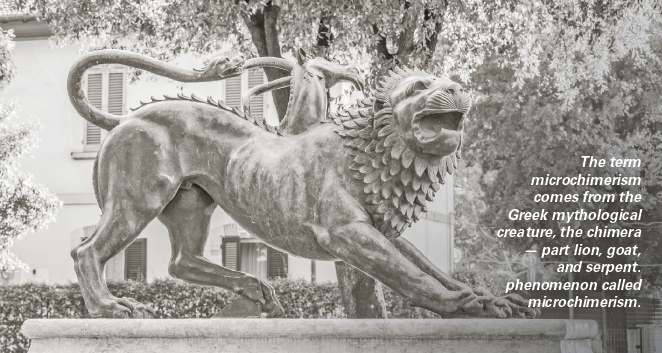 In early autumn of 1889, Christian Georg Schmorl, an assistant pathologist at the University of Leipzig, noticed some “very peculiar” cells in the lungs of women who had died of eclampsia during childbirth. He ruled out the possibility that these giant, oddly shaped cells with multiple nuclei were from the bone marrow. He concluded that they must have come from the placenta, making the first observation of microchimerism in a human (1-2).

Around eighty years later, scientists found genetic proof of microchimeric cells. When they looked at the blood of preg­nant women, they found white blood cells containing both X and Y chromosomes. Because female cells have two copies of the X chromosome and no copies of the Y, these cells must have come from the women’s male children in the womb (3).

While both male and female fetuses transfer cells to their mother, research­ers often look for the Y chromosome as a marker of microchimerism in women’s bodies because they can easily differentiate it from a woman’s own cells.

One interesting feature of these microchi­meric cells, scientists noticed, was that they persisted in a woman’s body long after she had given birth — on the order of decades.

“We now know that the cells are not cir­culating in perpetuity. They are going to the organs where they’re setting up shop, essen­tially, and they become capable of divid­ing,” said Diana Bianchi, director of the Eunice Kennedy Shriver National Institute of Child Health and Human Development, whose team found microchimeric cells in a woman 27 years after she had given birth (4). “There are even more detailed experi­ments recently that show that these cells are capable of differentiation, so at least some of them definitely have stem-like qualities.”

Bianchi, a pioneer in microchimerism research, has seen this feature of micro­chimeric cells first-hand.

While searching for an association between microchimerism and thyroid disease in women, Bianchi’s postdoctoral fel­low, Bharath Srivatsa, called her over to the microscope where he had been examining a woman’s diseased thyroid. He used a pink-colored probe for the X chromosome and a green probe for the Y chromosome.

Bianchi and her team wondered where those male cells came from. After they confirmed that the patient was not a twin, and never had an organ transplant or a blood transfusion, they found that she previously gave birth to a son (5).  “We hypothesized that those fetal progeni­tor cells helped to repair her diseased thy­roid,” Bianchi said.

“It was really an ‘aha’ moment,” she con­tinued. “Just thinking about what it actually was, literally, the hair on my arm stood on end because it was so dramatic. You don’t get many moments like that in research.” 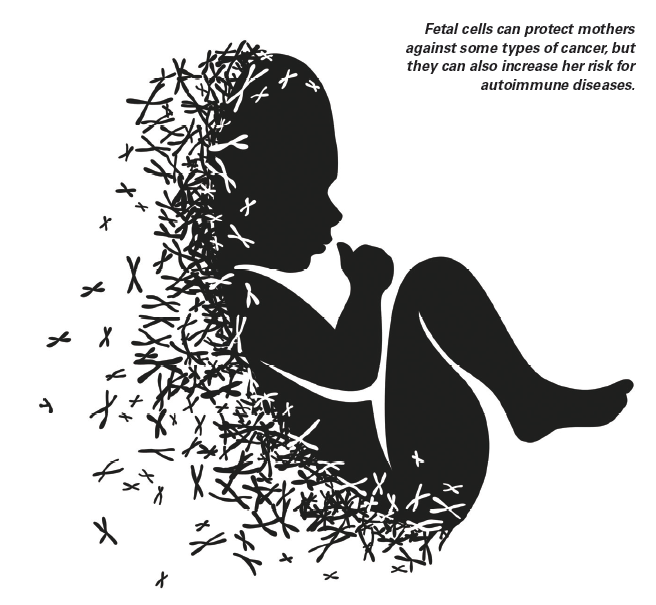 Like the healed thyroid tissue Bianchi saw through the microscope, scientists have evi­dence that in certain cases, microchimerism offers protection against diseases.

Women who have given birth have a decreased risk for breast cancer compared to women who have not. Due to this differ­ence, Vijayakrishna Gadi, currently at the University of Illinois Cancer Center, and J. Lee Nelson at the Fred Hutchinson Cancer Research Center, hypothesized that fetal microchimeric cells might provide women with protection against breast cancer.

Of the 82 women in their study who had given birth to boys, the presence of microchimeric cells more strongly asso­ciated with healthy women than those with breast cancer (6).

“Maybe these microchimeric cells have some sort of surveillance against breast can­cer,” hypothesized Sami Kanaan, a staff scien­tist in Nelson’s group at the Fred Hutchinson Cancer Research Center.

Because breast cancer shares some of the risk factors with ovarian cancer, Sara Hallum, a PhD student at the University of Copen­hagen, wondered if microchimerism might also protect women against it. In a study pub­lished earlier this year, Hallum reported that women with microchimerism had reduced rates of ovarian cancer (7).

“It might be that these microchimeric cells assist in a tissue repair mechanism because of their stem cell capacity,” she said. “It might also be that they boost the maternal immune system or immune surveillance of cancerous cells because of their immu­nological properties.”

Hallum hopes that one day, microchime­rism may function as a screening tool for dis­eases such as cancer, where a blood sample can reveal evidence of microchimerism.

In a study published late last year, Hallum also investigated the role of microchimerism in cardiovascular disease in women (8).

Women who suffer from preeclampsia dur­ing pregnancy have higher numbers of micro­chimeric cells than healthy women do, and having had preeclampsia puts women at an increased risk for developing cardiovascular disease. So, Hallum hypothesized that maybe the high concentration of microchimeric cells in women would associate with increased risk for cardiovascular disease later in life.

“But to our surprise, we saw the oppo­site,” she said. “We saw that women testing positive for microchimerism had a markedly reduced risk of ischemic heart disease.”

The result fits well with evidence from mice. “Among pregnant mice, if some injury is induced in their hearts, then we see an increased transfer of fetal cells to that par­ticular tissue area, and then they differenti­ate into cardiac cells and try to repair this induced injury,” Hallum explained (9).

“Similar mechanisms might be hap­pening in humans,” Hallum said. “At least that’s a hypothesis.”

While these fetal cells seem to offer protec­tion against devastating diseases, they are still foreign cells, which makes them prime targets for the immune system.

The immune system uses the human leukocyte antigen (HLA) molecule on the surface of all cells to distinguish your cells from foreign cells.

There are many different variants of the HLA gene, making them one of the most unique regions in a person’s genome. In fact, when patients need a bone marrow transplant, these HLA genes need to closely match. With all the good that these HLA mol­ecules do by patrolling our bodies for invad­ers, some HLA variants associate with auto­immune diseases, where the body’s immune cells begin attacking themselves.

Most patients with autoimmune disor­ders are women. For many years research­ers and clinicians chalked this up to differ­ences in hormone levels between men and women, but Nelson hypothesized that these autoimmune disorders might actually result from microchimerism.

The researchers wanted to know if a per­son did not have a risk variant for rheuma­toid arthritis, could a microchimeric cell introduce that risk? It turned out that it did. Women without the risk allele, but who had microchimeric cells carrying it, had an increased chance of developing rheu­matoid arthritis (10). 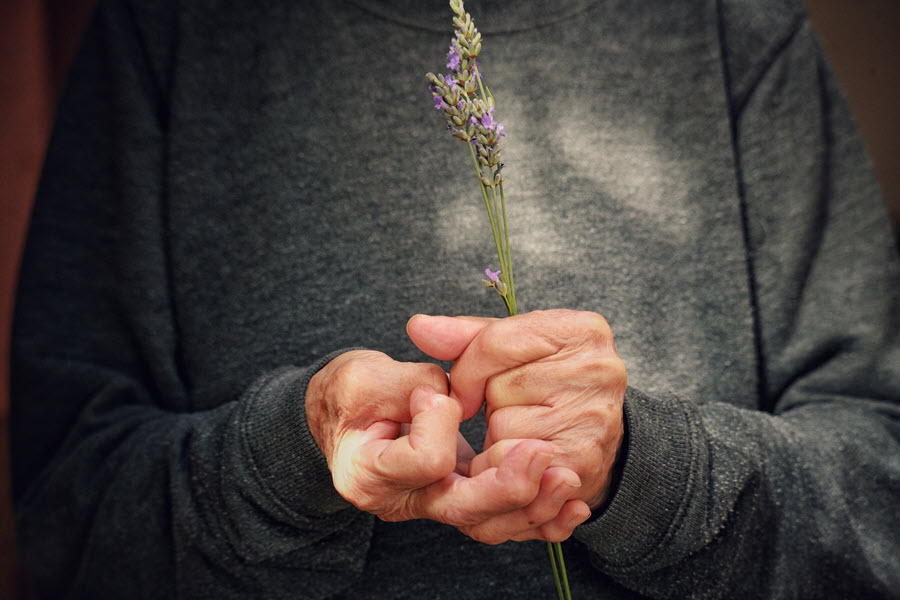 Scientists have shown that microchimerism associates with an increased risk of rheumatoid arthritis in mothers.

But what about the reverse? Could a microchimeric cell with a protective variant prevent a mother with a risk variant from developing the disease?

“Contrary to our expectation, it was the opposite,” Kanaan said. If women received the protective variant through a microchime­ric cell, their risk for developing rheumatoid arthritis actually increased (11).

Puzzled by their paradoxical result, Kanaan searched through the literature and found that the protective HLA sequence also matched a sequence shared by 66% of bacteria.

Proteins in human joints also share this sequence. “If you have this chronic immune response against this direct sequence, then it could shift against those proteins in the joints, and they could therefore trigger rheu­matoid arthritis,” Kanaan continued.

While protective HLA variants provided by microchimeric cells did not protect moth­ers, Kanaan wonders if this same mecha­nism could contribute to other autoim­mune diseases. It’s possible that other HLA molecules share sequences with bacteria that could put women at risk for specific autoimmune diseases.

“There’s still a lot of research ahead of us,” he said.

With both the benefits and harm caused by microchimerism in women’s bodies, why does the phenomenon occur?

“We think it’s probably a normal process of being a placental mammal,” Boddy said.

“If it was really deleterious, then evolution would have gotten rid of it,” she explained. “But here you see it persisting for over 100 million years since mammalians evolved placentation.”

Because these fetal cells take up residence throughout a mother’s body, they may support the mother throughout her pregnancy and dur­ing the child’s early development.

Microchimeric cells in maternal breast tissue could help with breastfeeding by potentially pro­moting mammary gland development, Boddy hypothesized. And, perhaps fetal cells in a moth­er’s brain could express oxytocin to promote a mother’s attachment and bonding to her child.

“It would be like the baby’s insur­ance policy to make sure the mother was attached to it,” Boddy said.

So far, these are just theories, but scientists using animal models have started investigating some of these questions.

Ultimately, this transfer of cells from the developing child to the mother and from the mother back to the child demonstrates the truly physical bond that exists between a mother and her children.

“If you’ve been pregnant, it changes one’s per­ception of how your body has changed,” Bianchi said. “People have come up to me, especially people who have lost a child, and they talk about how profound it is for them to think that the child’s cells are still alive in their body.”

Maybe not being one hundred percent our­selves is not so strange after all.