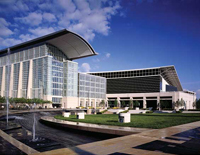 CHICAGO—The Society for Neuroscience (SfN) is touting thelocation of its 39th annual meeting as "a hub of great science and nightlife[that] is easily accessible from points around the globe." That is certainly agood selling point, given that SfN has more than 30,000 members in 130 chaptersworldwide—but also given that some 32,000 people from across the globe areexpected to attend the Neuroscience 2009 event, being held in Chicago'sMcCormick Place South Oct. 17-21.
As SfN event organizers put it, tying the energy of theirevent to that of the Windy City, "Neuroscience 2009 will offer the unequalledscientific content you have come to expect in a world-class city." Theorganization also points to its esteemed and eclectic speakers in the past as asign of its unique energy, which have included the spiritual leader the DalaiLama, the architect Frank Gehry and Intel co-founder Andy Grove, among others.
That is a tradition that will continue to hold true thisyear, with many traditional speakers but also at least one pair that could becalled quirky—the speakers for the featured lecture on dialogues betweenneuroscience and society. Titled "Magic, the Brain and the Mind," thisparticular lecture has as its speakers internationally known magicians ApolloRobbins and Eric Mead, who will explore how attention, memory and perceptioninform the art and practice of illusion and magic. The lecture will includebrief presentations and demonstrations and a panel discussion with Robbins andMead, followed by questions from the audience.
Other featured lectures include the Albert and Ellen GrassLecture, "Mental Monitoring of Movement," to be presented by Dr. Robert H.Wurtz of the National Eye Institute; the David Kopf Lecture on Neuroethics,"Eyes Wide Open, Brain Wide Shut? (un)Consciousness in the Vegetative State,"by Dr. Steven Laureys of the University of Liege; the Fred Kavli DistinguishedInternational Scientist Lecture, "Moving in an Uncertain World: ComputationalPrinciples of Human Motor Control," by Dr. Daniel M. Wolpert of the Universityof Cambridge; and six other featured lectures.
In addition to those featured lectures, SfN is offering anumber of themed "special lectures" at Neuroscience 2009, two of them on thegeneral subject of development; three on neural excitability, synapses, andglia; three on disorders of the nervous system; one on sensory and motorsystems; two on homeostatic and neuroendocrine systems; two on cognition andbehavior; and one on novel methods and technology development.
Neuroscience 2009 also offers 24 mini-symposia in the samesubject areas as the special lectures, plus 23 full symposia in those subjectareas. In addition, there is a full symposium on the topic of history,teaching, public awareness and societal impacts in neuroscience, and anotherone—the event's public symposium—titled "In Celebration of Darwin: Evolution ofBrain and Behavior."
Short courses, workshops and meetings during theNeuroscience 2009 event also run the gamut, including such topics as epigeneticcontrol and neuronal function, new frontiers in live-cell imaging, professionalskills development, funding opportunities with the NIH, surviving as a juniorfaculty member, time management, how to manage a research laboratory andmentoring, among many others. A NeuroJobs Career Center offering is alsoavailable every day during Neuroscience 2009.
All of which lends credence to SfN's assertion that itsmeeting is "the world's largest and most influential annual gathering of neuroscientists [where through] thousands of presentations, attendeesdiscuss the latest advances in understanding the nervous system."

New NIH director to speak at Neuroscience 2009
CHICAGO—National Institutes of Health (NIH) Director Dr.Francis Collins will deliver a special presentation at the annual meeting ofthe Society for Neuroscience (SfN), Neuroscience 2009, in Chicago on Monday,Oct. 19. Dr. Collins will discuss his vision for NIH, as well as address thekey challenges and opportunities facing NIH and the broader scientificcommunity. 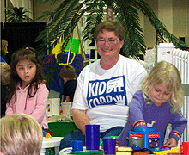 A place for your kids at Neuroscience 2009
CHICAGO—On-site child care and youth programs will beavailable for children ages 6 months to 12 years so that Neuroscience 2009attendees can enjoy "a reliable, affordable, and trustworthy option for childcare during the annual meeting," notes SfN in its preliminary program. Theseservices will be provided through KiddieCorp, a national firm with more than 20years experience in on-site conference child care. For more information, visitthe KiddieCorp Web site. Space is limited,so attendees should reserve space early, SfN notes.
SfN makes planning and registration easy online
WASHINGTON, D.C.—Neuroscience 2009 advance registration isopen online until Sept. 24. SfN also has created the Neuroscience MeetingPlanner (NMP) function online to help attendees plan their visit and navigateNeuroscience 2009 better. A link to the NMP can be found on the main page forthe Chicago meeting, here. Also, if you want to share a hotel room to reduce costs, youcan use SfN's roommate matching forum, click here.