BOSTON—One thing about drug discovery and development isthat a whole lot of chemistry goes on, so if you're in the field, you probablyassociate DDT with two things: the acronym for the world's most well-knownsynthetic pesticide and the name for IBC Life Sciences' annual drug discoveryevent, which was first known as the Drug Discovery Technology show and later asthe Drug Discovery Technology & Development World Congress.

After that latter name change, it held on to the DDT monikernonetheless, but that all changes in this 14th year of the event, which ushersin the arrival of IBC's Drug Discovery & Development Week.

It's far more than just a name-change for the event, though,notes Michael Keenan, a project manager and producer at IBC, and conferencedirector for Drug Discovery & Development Week. In addition to shedding theDDT from its name, the event is moving away from a broad overview of drugdiscovery and development technology and into a more focused look at strategiesfor successful discovery and smooth transition into the clinic.

"Back in the mid-90s, it was very much a technology-focusedevent, and we started talking about the technologies that were being hypedthen," Keenan says. "So over the years we covered things like high-throughputscreening, proteomics, genomics and a whole lot of others. But now as we lookat some of these technologies 10 or 12 years later, we see that while a lot ofthese technologies have had a significant impact, many of them didn't have theimpact the people expected from all the hype."

So, as the pharmaceutical and biotech industry has movedaway from a too-heavy focus on technology along, so too has IBC decided toevolve its own annual show to match that, Keenan says. 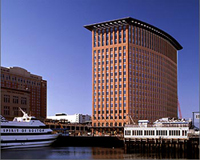 Being held Aug. 3-6 at the World Trade Center Boston, DrugDiscovery & Development Week 2009 is being billed as "the industry'spremier, international conference and exhibition to provide education on themost vital topics in drug discovery and development to help accelerate productsto market."
More than just a place to find out about technology, IBCwants it to provide a meeting place for attendees from around the world tonetwork; to find business and scientific partners; and to discuss scientificadvances, research and development strategies, business alliances andinformatics solutions in drug discovery and development.

"Our goal was to create five focused niche conferences forthe event to appeal to scientists working in drug discovery and development andgive them practical strategies and example of how to do their jobs better,"Keenan explains. "Especially in this economic environment, people need to beable to come to a conference and see things that directly apply to their jobs,so that when they leave after several days, they get a good idea for not onlywhat's happening in drug discovery and development but what's working—and whatmight work for them, too."

Three of the conferences focus on therapeutic areas:antibody therapies, oligonucleotide therapies and cancer drug development. Theother two are more broadly strategic, with one focusing on the linking oftargets to diseases and the other focusing on drug safety strategies.

But the thread linking all five, Keenan says, is that theymesh to feature practical strategies and forward-looking approaches that willhelp attendees accelerate small molecules, antibody therapeutics andoligonucleotide therapeutics from early discovery to the clinic.
"It's not that these areas cover new issues per se," Keenannotes. "But the thing everyone got caught up in the past was new technology andsometimes the promise of that technology didn't live up to expectations. But incovering the topics we have chosen to cover, what we see are a lot of peopleand companies more inventive and creative in increasing their chances ofsuccess and reining in their risks and costs. To that end, we've really lookedfor people in the industry who are on the cutting edge, many of them havingnever presented at meetings before."
Drug Discovery & Development Week 2009 Conferences:

Next Wave of Antibody Therapeutics—Aug. 3-5
This conference brings together leading companies in thefield of antibody conjugation and features emerging data on multiple antibodycombinations, bi-specifics and multi-specifics, and new approaches to improvepotency and efficacy.

Oligonucleotide Therapeutics: From Concept toImplementation—Aug. 3-5
This conference addresses the question that IBC feels may beoverwhelming the oligo drug discovery and development industry: Are weleveraging on the promise? If so, IBC asks, where are the proofs ofimplementation and how do we leapfrog this industry forward?

Targets in Context: Linking Targets to Disease—Aug. 4-6
This conference looks specifically at how companies arecurrently linking targets to disease more effectively through the use ofinnovative tools and approaches, and how they are ultimately showingproof-of-concept in the clinic.

Drug Safety Strategies to De-Risk Compounds—Aug. 4-5
This conference is designed to provide the latest data frompreclinical models to predict hepatotoxicity, cardiotoxicity and muscletoxicity—areas that have a larger-than-ever impact on decisions about whetherto progress a compound or withdraw it from development.

IBC Life Sciences invites you to take advantage ofthe opportunity to just "sit back and listen" to insightful presentations fromleaders in drug discovery and development research, by attending the keynotepresentations during the event. Learn about the current state of the industry,what lies ahead and the actions needed to move forward.

The date, topics and speakers are as follows:

Wednesday, Aug. 5—From Empiric to Specific: How Can WeTranslate Science into Cancer Treatments and Get it Right More Reliably? by Dr.George D. Demetri, director, Ludwig Center at Dana-Farber/Harvard CancerCenter, Center for Sarcoma and Bone Oncology, Dana-Farber Cancer Institute.

In addition to the keynoters, IBC also invited all attendeesto attend an industry leadership forum on Tuesday, Aug. 4 that is titled Oligonucleotide Therapeutics—Are We Leveraging on the Promise? The panelparticipants will be Dr. James Thompson, of Quark Pharmaceuticals; Dr. PaulBurke, of Merck & Co.; Dr. Klaus Giese, of Silence Therapeutics; and Dr.Tod Woolf, of RXi Pharmaceuticals.
Not just a bunch of booths

According to Conference Director Michael Keenan, theexhibit hall at Drug Discovery & Development Week 2009 isn't going to be astandard walk-through affair this year. He and the rest of IBC are encouragingconference attendees to take part in any of a number of customized exhibit hallattractions that will allow the opportunity to collaborate with others in waysthat could positively your own scientific research, as well as meetface-to-face with more than 70 companies over two days.

"Of course, we want people to come and see under one roofthe key companies that are providing tools and services," Keenan says. "Butmore than that, we have the product showcase tours and interviews to highlightnew products launches, as well as interactive discussions with posterpresenters and speakers in the hall. The exhibition hall is really designed tobe a key networking opportunity this year."
Getting to know you

Also on the agenda for the Drug Discovery &Development Week 2009 event is the Face-to-Face Scientific Exchange: Tuesday NightCocktail Reception, which will give a chance for personal interaction with theindustry experts, academic leaders and others at the event to exchange ofinformation and scientific ideas.