Top Image:
Telomeres (in white) cap the ends of chromosomes (in gray) and protect them from degradation.
Photo by Nasa on Wikipedia

Telomerase: the Protector of Chromosomes

Scientists found evidence of telomeres in the 1930s, but did not identify them until the 1970s. Since then, researchers’ understanding of telomeres and their role in DNA repair, aging, and disease has expanded exponentially. 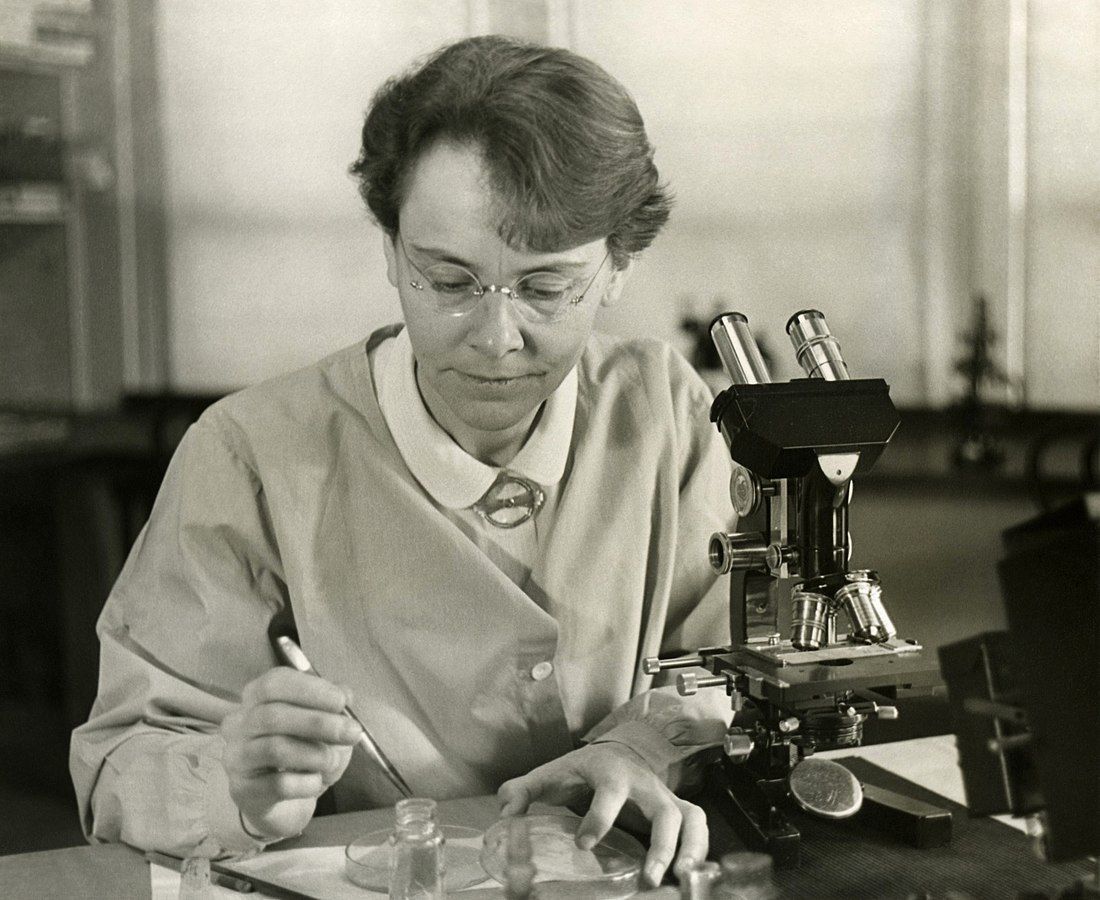 The Nobel Laureate Barbara McClintock worked in her laboratory at Cold Spring Harbor in 1947. McClintock studied the chromosomes of maize, and proposed that something was added to the ends of chromosomes to prevent them from fusing together after mitosis.
Credit: Smithsonian institution

Long before she won the Nobel Prize, Barbara McClintock earned her PhD from Cornell University, and struggled to find a job during the Great Depression. In 1936, geneticist Lewis Stadler arranged for McClintock to join him as an assistant professor at the University of Missouri. Stadler was studying the mutagenic impact of X-ray irradiation on maize, and provided McClintock with some samples. She noticed something interesting; the ends of chromosomes were broken and fused to one another, forming loops. She observed the same phenomenon during the anaphase stage of mitosis, and suspected that something special “heals” these broken ends, capping them to prevent further end-to-end fusion (1).

It took nearly 40 years before that special chromosome “healer” was identified. In the 1970s, Elizabeth Blackburn, now a professor at University of California, San Francisco, worked in Joseph Gall’s lab at Yale University as a postdoctoral researcher. While studying the chromosomal ends of the single cell organism Tetrahymena, affectionately known as pond scum, Blackburn identified a tandemly repeated sequence: CCCCAA (2), which came to be known as the telomere. 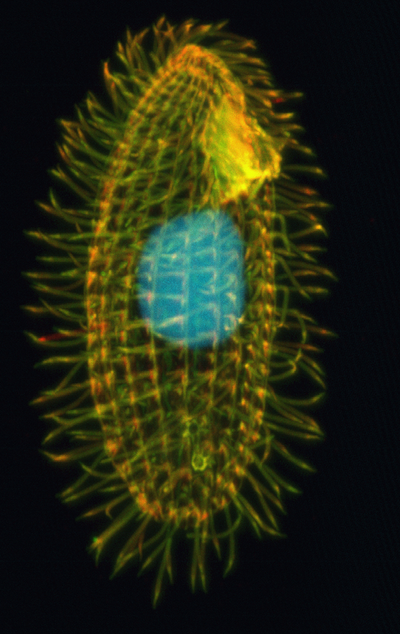 Blackburn and Greider studied the chromosomes of the single-celled ciliate Tetrahymena thermophila to investigate the building blocks of telomeres.
credit: public library of science

Following her postdoctoral work at Yale, Blackburn opened her lab at the University of California, Berkeley. Jack Szostak, a professor at Harvard Medical School, became intrigued with telomerase after attending a conference talk given by Blackburn. In his own lab, he observed that artificial minichromosomes or linear DNA molecules that lacked telomeres became damaged once introduced into yeast cells. He talked with Blackburn, and they devised an interesting experiment. When Szostak stuck the Tetrahymena tandem repeat sequence onto the ends of the minichromosomes and added them to the yeast cells, the minichromosomes evaded degradation (3). Astonishingly, DNA from one species protected DNA in another species, pointing to a common mechanism shared across species.

1980s: Telomeres are created by a special enzyme

In the early 1980s, Carol Greider, now a professor at University of California, Santa Cruz, first spoke with Blackburn when she interviewed for graduate school at University of California, Berkley. Drawn by the novelty of telomeres, Greider excitedly joined Blackburn’s lab. At the time, it was unclear what was responsible for adding the tandem repeats to the ends of chromosomes. Based on her recent work with Szostak, Blackburn suspected that an enzyme was involved, so Greider set out in search of this putative enzyme.

After a year of experiments, they confirmed novel enzymatic activity. “The first time we saw that, it was really exciting; but we wanted to be really sure that we weren’t being fooled, and that it wasn’t a known enzyme making it look like it was something new,” said Greider. 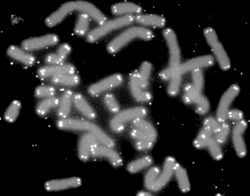 Telomeres (in white) cap the ends of chromosomes (in gray) and protect them from degradation.
credit: nasa

Another year of running control experiments finally reassured them. Greider and Blackburn published their findings, introducing the telomerase complex, which is comprised of protein and RNA, and unsurprisingly, the CCCCAA sequence (4). Prior to this study, scientists had only proposed models for how telomeres were maintained. Greider and Blackburn presented evidence.

For their collective research on telomeres and telomerase during the 1970s and 80s, Blackburn, Szostak, and Greider received the Nobel Prize in Physiology or Medicine in 2009. However, the work did not stop there. With a new decade came a deeper understanding of the role that telomerase plays in health and disease.

Following graduate school, Greider accepted a unique opportunity to open her own lab in 1987 as an independent postdoctoral researcher at Cold Spring Harbor, where she continued her studies on the novel telomerase. She was particularly interested in determining the mechanism by which de novo telomeric repeats were added to the ends of chromosomes; she eventually identified an internal RNA component that served as a template (5). 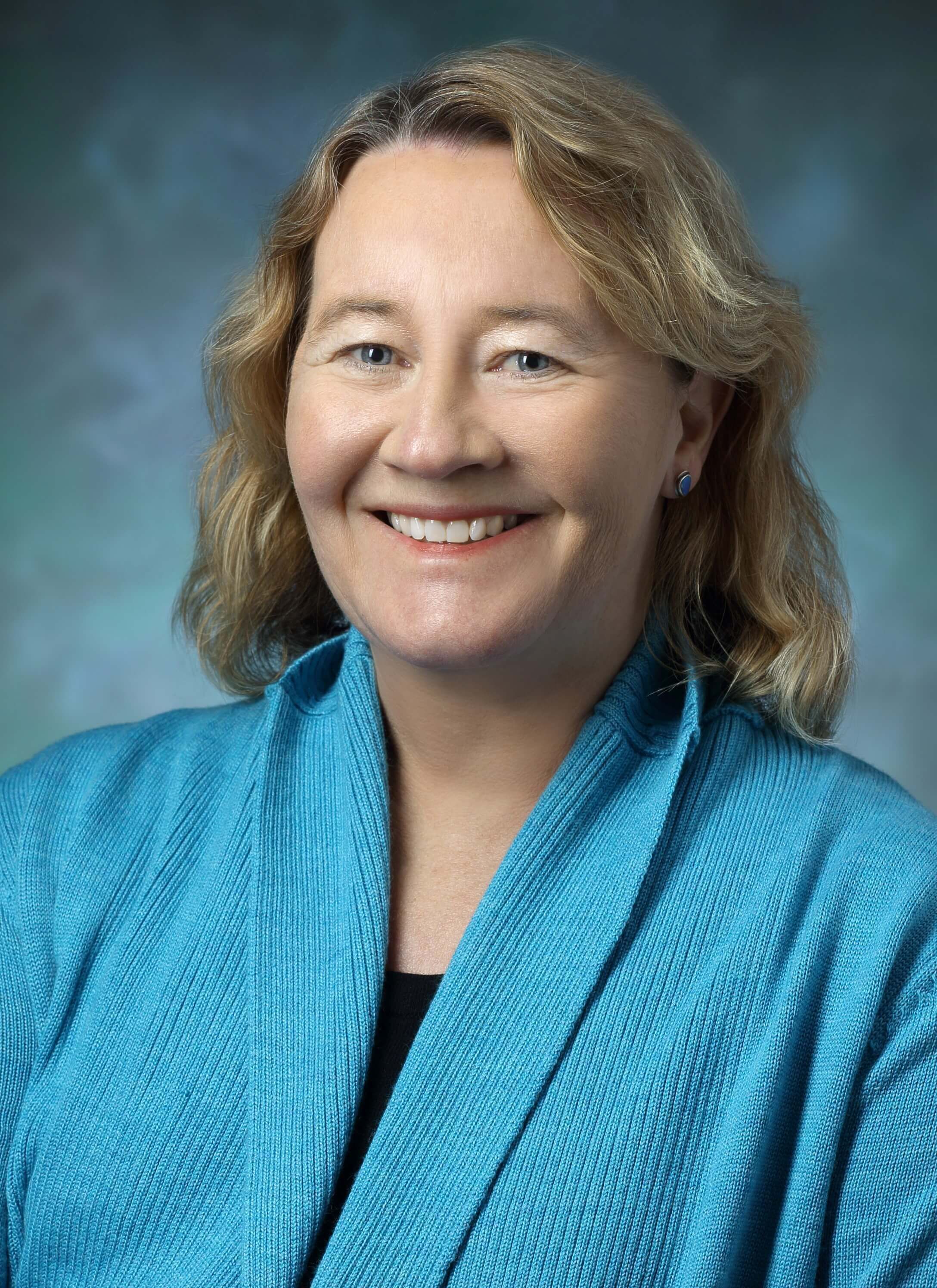 Around this time, Greider began a fruitful collaboration with Calvin Harley at McMaster University. Harley was interested in cellular senescence, or the point at which a cell stops dividing and dies. In 1961, Leonard Hayflick of the Wistar Institute demonstrated that cultured human cells divide 40 to 60 times before eventually entering senescence (6), a process eponymously named the “Hayflick limit.”

Harley and Greider found that as cultured human cells age, or divide, their telomeres become progressively shorter. Introducing telomerase prevented cellular senescence (7). “This suggests that it is the telomeres that are limiting the growth of the cells,” said Greider. When the telomeres shorten, the cells stop dividing. Interestingly, unlike somatic cells, many cancer cells produce telomerase to evade telomere shortening and cellular senescence.

As her career progressed, Greider found herself increasingly interested in the role telomerase plays in mammalian systems. “When our telomerase findings were published, people were interested in it, but it wasn’t clear that there were going to be any implications in terms of humans and disease,” said Grieder. “Since then, it’s become very clear that the role of telomerase in maintaining telomere length is very crucial, both for age-related degenerative disease as well as cancer.”

One day, Greider called up Robert DePinho, a professor at the University of Texas MD Anderson, who had been working on genetically engineered mouse models of cancer. She mentioned that her team had just cloned the RNA component of telomerase and asked if he wanted to make a knockout mouse. At the time, DePinho was curious as to why aged individuals show increased cancer rates. Suspecting that it was more than the mere passage of time and that telomeres played a role in the process, he eagerly agreed. “That was the beginning of a really wonderful collaboration,” said DePinho. 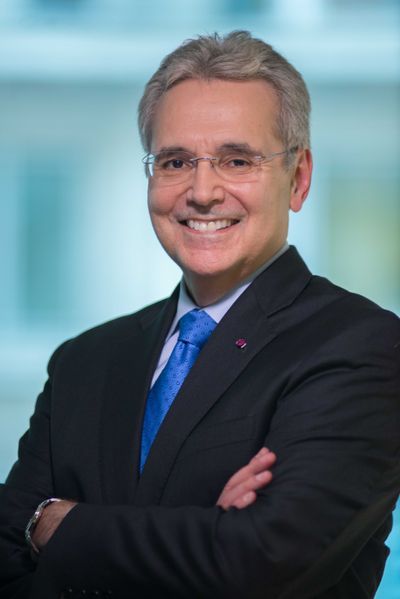 Greider and DePinho first introduced telomerase null mice in a 1997 paper in Cell (8). They followed these mice across six generations, and observed progressive telomere dysfunction, characterized by telomere shortening and chromosomal fusion with each successive generation.

With a mouse model in hand, they could begin experiments aimed at determining whether tumors required telomerase to grow. However, when they introduced cancer-causing genes into telomerase null cells and injected these cells into cancer-prone mice, the mice still grew tumors. “What was really exciting to everybody was that, first of all, you can generate such a mouse,” said DePinho. “But what was a big surprise was that the mice were viable and appeared perfectly fine.”

At the time, scientists knew that humans had relatively short telomeres compared to mice. This fact led some in the research community to question the value of using mice to model telomere dysfunction. However, DePinho was not convinced. In a 1997 Cell paper, they reported that 6th generation telomerase null mice exhibited telomere erosion and end-to-end fusion, a finding that fulfilled McClintock’s hypothesis. Given that telomeres progressively shorten with each cell division, he figured that it would likely take a couple of generations to see significant effects on organ systems. 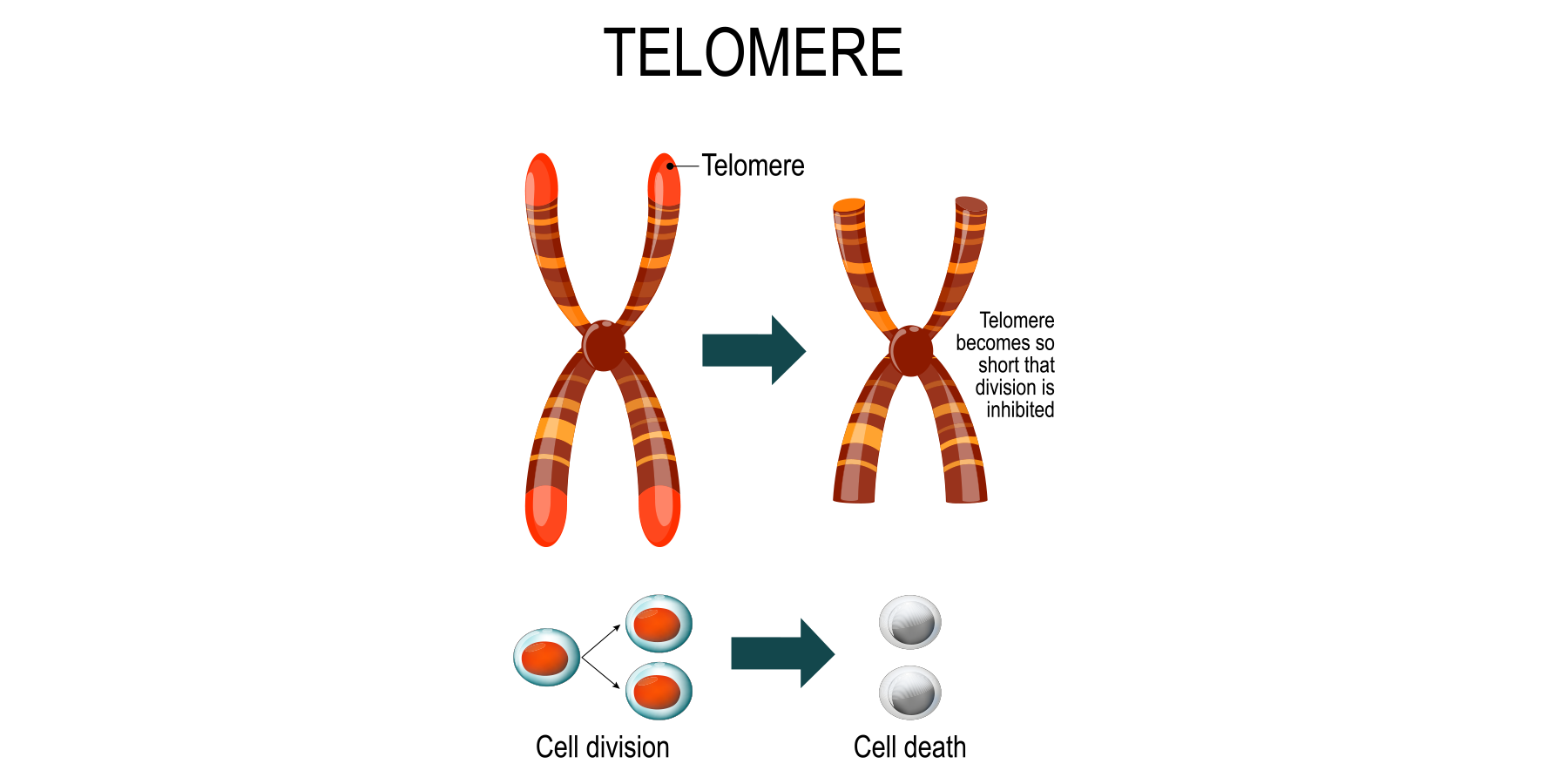 One evening while burning the midnight oil, DePinho’s postdoctoral researcher walked into his office with some interesting data. The pathology results of the testes of generation 6 telomerase null mice showed barren tubules, lending insight into why these later generation mice exhibited diminished fertility. When they looked at other tissues that also had high cell turnover, such as the spleen and gut, they observed progressive atrophy over generations of mice. In later generations of mice, atrophy accelerated, with high tissue turnover observed within a single generation (9). “That was a very important affirmation that telomeres play an important role in maintaining tissue homeostasis,” said DePinho.

These initial findings preceded extensive discoveries from studies of telomerase null mice about health and disease. DePinho and his colleagues went on to show links between telomere dysfunction and aging, including diseases characterized by rapid aging or premature aging, as well as cancer and chronic inflammatory and degenerative conditions (10). 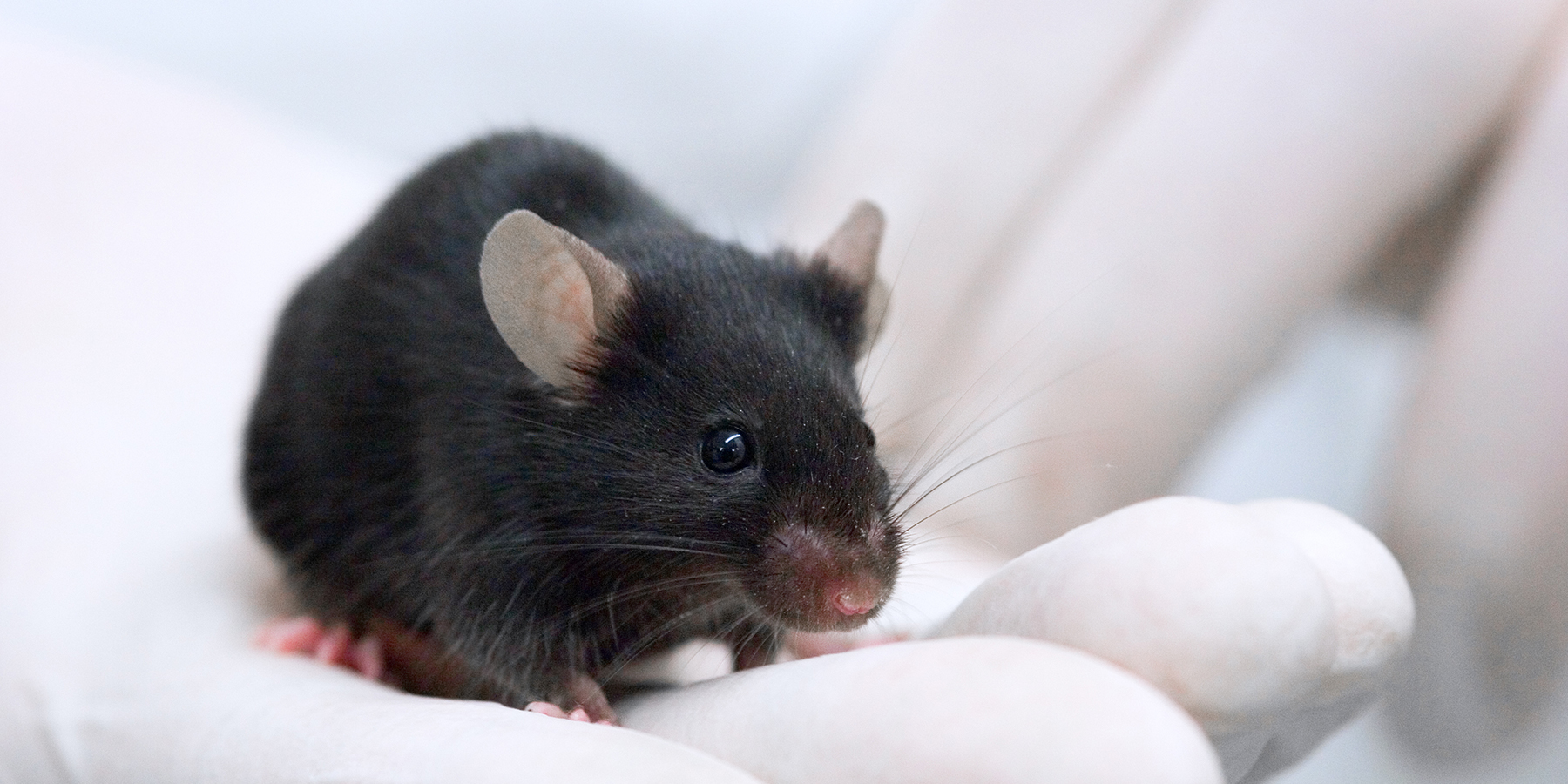 Despite initial pushback from the scientific community, the long telomeres of mice made them a useful model system for studying telomere function and telomere-related disease.
credit: dra_schwartz

Although many questioned the relevance of using mice as a model system to study telomeres, the differences between mice and men prompted DePinho and colleagues to engineer mice with human-like telomeres. In the end, these mice have given researchers insight into the role of telomerase in both cancer and aging. “If you understand model systems, you can exploit their experimental merits and the differences between species to really illuminate some of the most complex mysteries that are operative in human disease,” said DePinho.