Echinoderms, with their close evolutionary similarity to humans, provide insight into fundamental stem cell biology and neural regeneration that will inform human health.

Basking in the shallow waters of tide pools or lying at the bottom of the sandy ocean floor, echinoderms like sea stars and sea cucumbers are more human-like than one might think.

Unlike common model organisms such as fruit flies or roundworms, echinoderms and humans are both deuterostomes, meaning that during embryonic development, they undergo the same developmental steps.

“Although they look nothing like us, they are our genetic cousins,” said Vladimir Mashanov, an echinoderm researcher at Wake Forest University. While we share a common ancestor, echinoderms trump humans when it comes to regeneration.

“They share similarities in genome structure, genome organization, the genes they have, and the proteins they make,” said Veronica Hinman, a developmental biologist at Carnegie Mellon University, but “one group has this incredible capacity to regenerate, and the other group doesn't have it at all.”

This is especially clear in the context of the nervous system. Humans cannot completely regenerate their nervous systems after injury like echinoderms can. However, by studying the neurobiology of different echinoderm species, scientists uncover the molecular mechanisms required to regenerate the nervous system, setting the stage for improved stem cell treatments, and providing insights for developing future therapies for neurodegeneration in humans.

Sea cucumbers eject their guts and dedifferentiate their cells

José García-Arrarás, a biologist who studies sea cucumber regeneration at the University of Puerto Rico, first encountered echinoderms in the clear blue water off the coast of his native Puerto Rico.

“I did a lot of skin diving as a kid, so I knew the sea cucumbers,” said García-Arrarás. 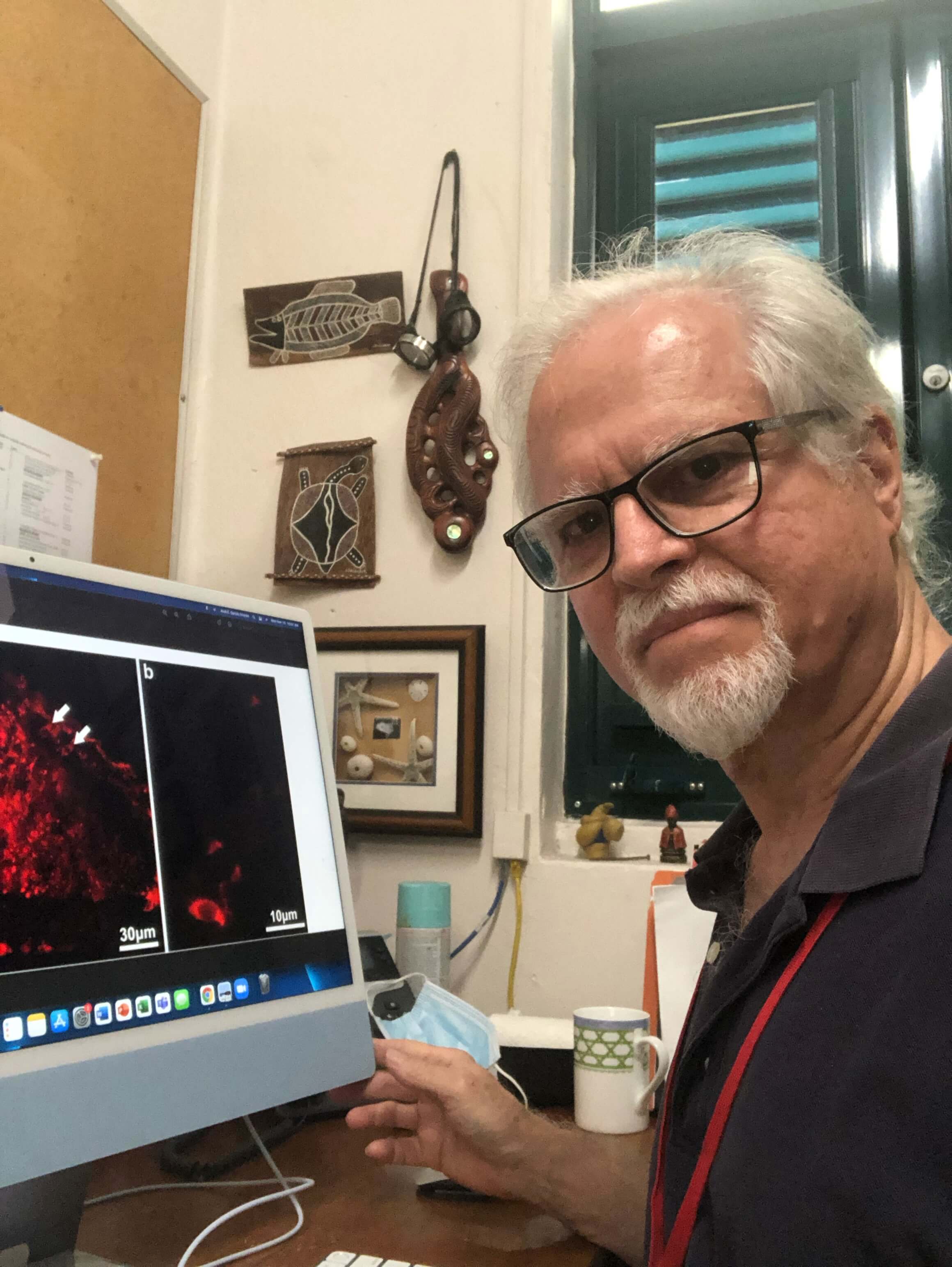 When sea cucumbers feel threatened or stressed, they eject their entire gut from either their mouth or anus to scare off predators. This expulsion does a fair amount of damage to the gut and to the enteric (gut) nervous system. After a few weeks, however, the sea cucumber completely regenerates its gut and enteric nervous system.

“What we're trying to look at now is the molecular basis of the dedifferentiation to see if we can extrapolate some of the findings that we see to the vertebrate level,” he said.

García-Arrarás’ team recently profiled the gene expression changes that occur in the intestine during the regeneration of the sea cucumber, Holothuria glaberrima (2). Because the nervous system is embedded in the body wall of the animal, they could not differentiate between expression changes taking place in the nervous system versus the surrounding tissues. Recently, however, they developed a technique to isolate the radial nerve cord from the adult sea cucumber (3).

“The first amazing thing is that we could take the whole nerves out quite easily and that they keep their structure,” he said. The researchers also noticed that while they saw lots of evidence of cellular dedifferentiation in the isolated nerve chords, they were surprised to see very little cell death and cell division.

Lost an arm? No big deal for a brittle star

Mashanov is more interested in regeneration than embryonic development. With regeneration, “you're not starting from a single undifferentiated cell. You're starting from mature tissue,” he said. “There is an extra level of what that mature tissue will do in order to sense the injury and respond properly to initiate regeneration. How would they know when to stop growing at the right time? I think that's enough to keep you curious for quite a while.”

Working with the brittle sea star, Ophioderma brevispina, Mashanov uses high throughput gene expression analyses to identify genes that may be important for regenerating the brittle star nervous system after injury. Due to its importance during development, Mashanov and his team tested the role of the Notch signaling pathway in brittle star limb regeneration (4). 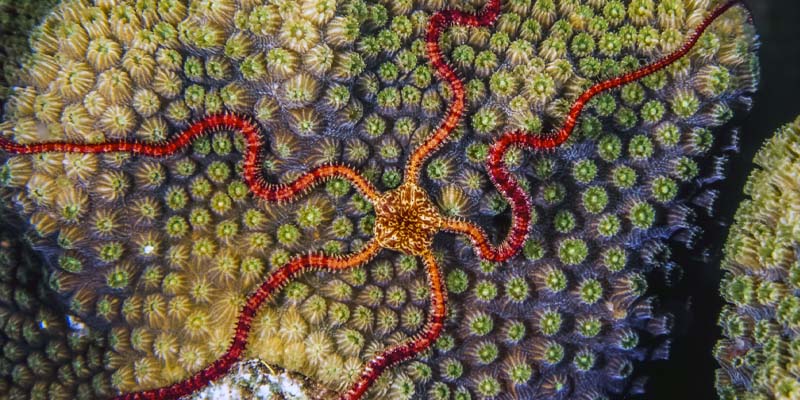 Brittle stars might lose an arm, but scientists like Vladimir Mashanov investigate the underlying molecular mechanisms of their regeneration to understand how it can be applied to humans.
credit: iStock

“People tend to ignore those elements because they're traditionally considered to be junk DNA. But we decided to look further, and we were able to prove that the activation of those mobile genetic elements is not random,” he said. How exactly these transposable elements function in brittle star regeneration, however, is not yet clear. Mashanov and his team plan to pursue that question in the future.

Mashanov wants to know how brittle stars know when to halt cell division during regeneration. While these animals engage in substantial cell division and cell proliferation, they never get cancer.

“What makes that cell division in response to injury as efficient as it is in order to replenish the lost cells, but also what makes it stop at the right time?” Mashanov asked. While he suspects that it may take a long time to learn the answer, he’s sure that the solution is out there.

If a sea star larva saw a magician sawing a person in half, they wouldn’t be that impressed. When their head is severed from the rest of their body, they can regrow their entire brain and head region as good as new (5). Hinman has wondered for years why sea stars have this incredible ability, but humans don’t.

“Often, people think starfish are these really basal, strange, outgroup animals. But no, they're clustered right in there with vertebrates. Why they have these different biologies was really fascinating to me,” she said.

Sea star larvae have the same bilateral symmetry as humans do, and many of their genes and neuron types are conserved with humans. Larvae are also easier to work with than adult sea stars because researchers can easily modulate larval gene expression and follow their cells through development.

Hinman and her team recently developed a system to track cells in larvae of the sea star species Patiria miniate (6). They used this system to follow and characterize cells at the injury site after bisecting the larvae. They found that after cutting the sea star larvae in half, cells that were never destined to become neurons began to express the gene sox2, which is normally highly expressed during sea star nervous system development (7). The researchers also found that some of the cells that newly expressed sox2 began to express sox4, a neural precursor marker. In fact, by following these cells through development, they found that these cells led to the development of new neurons.

“Sox2 is really interesting because it's a Yamanaka factor,” said Hinman. “You can take mature human cells and induce them to become stem cells by chucking some proteins on them when they're growing in cell culture, and now we find in a starfish, something about wounding induces this expression naturally.”

Sea stars are therefore a useful model for studying how cells respecify into stem cells in their natural context of regeneration. Because of the close evolutionary relationship between echinoderms and humans, it’s possible that some of the same genes required in sea stars may also aid stem cell respecification in humans. “We could discover new genes that maybe humans have, but they're not used in this way,” Hinman added.

Although starfish and sea cucumbers seem as different from humans as can be, insights gleaned from how they naturally dedifferentiate their cells and respecify them into stem cells will likely lead to important advances in stem cell therapeutics and applications for neurodegeneration in humans. While these findings are far from the clinic at the moment, echinoderms are poised to share their secrets.

From superfood to medicine maker, spirulina is a new cellular factory

From superfood to medicine maker, spirulina is a new cellular factory