The receptor that the scientists focused on was for neuropeptide Y. This receptor is found in what is known as the central amygdala, a group of nuclei located within the medial temporal lobes of the brain.

"We've known for quite some time that neuropeptide Y is an endogenous [naturally occurring] anti-stress agent," said Markus Heilig, clinical director of the National Institute of Alcohol Abuse and Alcoholism (NIAAA), in a press release about the study. "We've also known that development of alcohol dependence gives rise to increased sensitivity to stress. This paper elegantly and logically brings these two lines of research together. It supports the idea that strengthening neuropeptide Y transmission in the amygdala would be an attractive treatment for alcoholism." 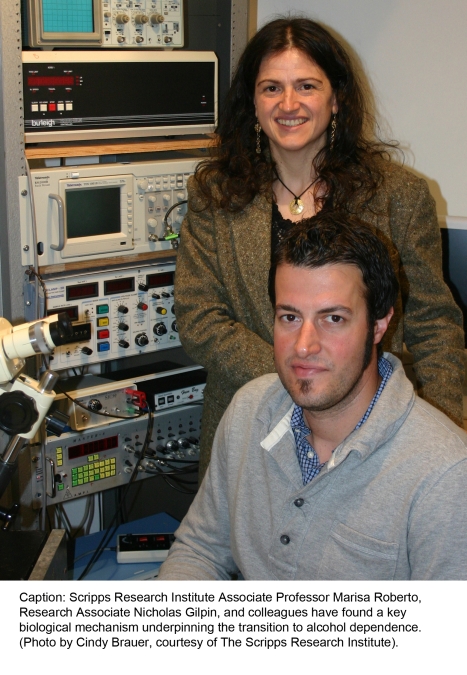 The amygdala plays a central role in "learning and memory associated with emotionally charged stimuli or situations," as well as in "anxiety-related behaviors and disorders in humans and animals," Roberto and Gilpin say.

"More specifically," the authors note, "the anxiety-reducing actions of neuropeptide Y are mediated by a particular part of the amygdala, called the central nucleus of the amygdala, which is the focal brain region in the experiments described in this paper."

In a press release from Scripps Research, Roberto listed "the role of the brain's stress system in compulsive alcohol drinking driven by the aversive aspects of alcohol withdrawal" as the focus for the study, while Gilpin noted that one of the main goals was "to determine the neural circuitry that mediates the transition to alcohol dependence."

Chronic neuropeptide Y infusions did prove to suppress alcohol consumption, the scientists report. Normally, ethanol creates significant increases in inhibitory GABAergic transmission—GABA is another neurotransmitter—in the amygdala, an effect that neuropeptide Y can both block and reverse.

The results were accompanied by a surprise. The scientists discovered that a subset of neuropeptide Y receptors, known as Y2 receptors, actually function contrary to what was previously thought.

"Previous behavioral evidence suggested that antagonism of Y2 receptors in whole brain suppresses alcohol drinking, similar to the effects of neuropeptide Y," Gilpin said in a press release. "However, our data suggest that Y2 receptor blockade in central amygdala might actually increase alcohol drinking, presumably by affecting pre-synaptic release of GABA. These data also suggest that antagonism of post-synaptic Y1 receptors in central amygdala provides a viable pharmacotherapeutic strategy, a hypothesis supported by previous work from other labs."

Roberto and Gilpin describe neuropeptide Y as "a naturally occurring and abundant peptide in the brains of mammals." Its effects include sedation, reduction of anxiety and promotion of feeding. Given these effects, neuropeptide Y has been targeted in the past as part of the search for treatment options for obesity and anxiety disorders.

"Much evidence suggests that the transition to alcohol dependence is defined by recruitment and/or functional upregulation of stress-related peptides in central amygdala. Some of these peptides promote anxiety in the alcoholic organism, which leads to subsequent relapse and compulsive alcohol-seeking and -drinking behaviors," the authors note. "Other peptides, such as [neuropeptide Y], are recruited to counteract those effects by reducing anxiety and alcohol consumption. In the central nucleus of the amygdala, [neuropeptide Y] affects excessive, but not moderate, levels of alcohol consumption. Here we show that this effect is likely attributable to pre-synaptic modulation of GABA release by [neuropeptide Y]."

The authors identify GABA as "the major inhibitory neurotransmitter in the mammalian brain, where it has a fairly ubiquitous distribution. GABA systems have long been a target for development of anxiety-reducing drugs."

The paper, "Neuropeptide Y Opposes Alcohol Effects on GABA Release in Amygdala and Blocks the Transition to Alcohol Dependence," was scheduled to be published in the June 1, 2011 print edition of Biological Psychiatry. The paper's authors were Roberto, Gilpin, Kaushik Misra, Melissa Herman, Maureen Cruz and George Koob, all of Scripps Research. An electronic version of the paper can be found online at http://www.ncbi.nlm.nih.gov/pubmed/21459365.

The study received support not only from the National Institutes of Health's NIAAA but also from the Pearson Center for Alcoholism and Addiction Research at Scripps Research.