LA JOLLA, Calif.—Scientists at the Sanford-Burnham MedicalResearch Institute have shown in a genome-wide study how key immune sensorsarrive at the "front lines" of infection. According to lead author Dr. SumitChanda, this knowledge may be exploited to develop new therapies for infectiousand autoimmune diseases with significant unmet medical need like lupus andinflammatory bowel disease (IBD). 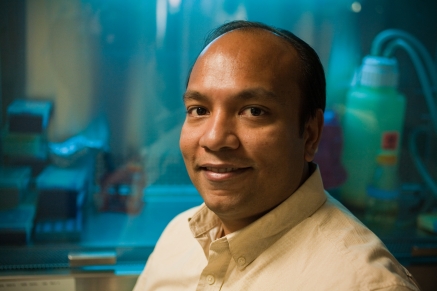 In a study published March 14 in Cell Host & Microbe, Chanda and his colleagues identified 190genes that are crucial to the function of two toll-like receptors (TLRs), TLR7and TLR9, which recognize pathogens and trigger immune responses. TLRshave been widely studied and research into these pathways even garnered a NobelPrize in 2011; many pathogens—including HIV, Group A streptococcus and theinfluenza virus—elicit a response from TLR7 or TLR9 in the endosomes of cells.
The study is actually the third time that Chanda'slaboratory has used a systems-based approach to dissect host/pathogeninteractions, one that focuses on genome-wide RNAi analysis. The teampreviously used this method to study how cells respond to influenza and HIVinfections.
"Essentially, we knocked down every gene in the genome, oneat a time, and asked the question, 'how does the cell respond to a viralinfection?'" says Chanda, who is an associateprofessor in the Infectious and Inflammatory Disease Center at Sanford-Burnham."What we're interested in studying now is what the host cell requirements arefor replication, how the cell senses these viruses and responds to differenttypes of microbial infection, then triggers autoimmunity."
The risk inherent in autoimmunity, of course, is the immunesystem mistaking some part of the body as a pathogen and attacking its owncells. TLR7 and TLR9 can end up mistakenly triggering an immune responseagainst the host, instead of the invader, if there are breakdowns in thisfirst-responder network.
"Our hypothesis was that there was not much known aboutthese pathways, and we have to do a bit more work to understand how things arefine-tuned to preserve that balance," Chanda says.
To act on this hypothesis, Chanda's laboratory used an RNAiscreen to identify 190 genes that cells rely upon to coordinate a response to apathogen that has breached the endosome. Then, using advanced computationalmethods, they were able to reconstruct a molecular blueprint that revealed theintricate wiring of this critical immune defense network. Next, they drilleddown and looked at one gene from the RNAi screen called hepatocyte growthfactor-regulated tyrosine kinase substrate (HRS) that plays a fundamental rolein localizing these receptors to the endosomes. HRS is part of a larger complexthat recognizes and sorts other proteins into various internal vesicles,including endosomes. 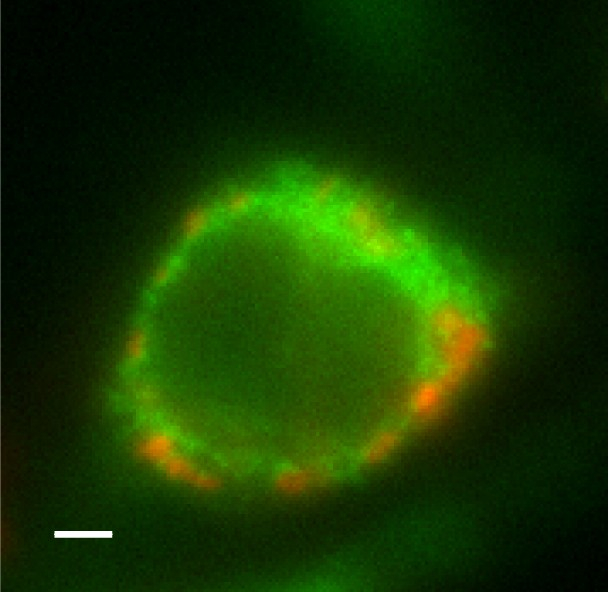 Previous research has shown that proper functioning of theimmune system depends on these critical receptors getting to the endosome. IfTLR7 and TLR9 are sent to the wrong place, the host is not only susceptible toinfection, but also to autoimmune diseases. Chanda's team found that withoutthis HRS protein, TLR9 cannot do its job because it is not delivered to theright location.
Chanda—who once worked in drug discovery at Novartis—is nowleading his team in the search for chemical compounds that might shut downerrant signaling in the TLR7 and TLR9 system. If scientists are able to findsuch compounds that also demonstrate a strong safety profile, treatments may bedeveloped for several autoimmune diseases, including lupus, Crohn's disease, diabetesand IBD.
"We have an amazingly rich set of data that gives us a setof potential targets, but now we need to go on and start assessing what wouldbe the best target for the treatment of disease and move into more of a leadoptimization type of analysis," he says. "Our challenge now is to findsomething that can be chronically inhibited without inducing long-term toxicityto the patient. But what this study does is open up the field for finding thesepotential candidates, and figuring out what will give you the best efficacy,but also a very reasonable safety profile."
The Sanford-Burnham study, "Cofactors Required for TLR7- andTLR9-Dependent Innate Immune Responses," was funded by the U.S. Department ofDefense, the Alliance for Lupus Research, the National Institute of Allergy andInfectious Diseases and the National Institute of General Medical Sciences atthe National Institutes of Health and the Irvington Institute FellowshipProgram of the Cancer Research Institute. Chanda's co-authors includedChih-yuan Chiang, Amanda M. Opaluch, Paul D. De Jesus and Quy T. Nguyen fromSanford-Burnham; Alex Engel and Gregory M. Barton from the University ofCalifornia, Berkeley; Irene Ramos, Ana M. Maestre and Ana Fernandez-Sesma fromthe Mount Sinai School of Medicine; Ismael Secundino and Victor Nizet from theUniversity of California, San Diego; and Genevieve Welch, Ghislain M.C. Bonamy,Loren J. Miraglia, Anthony P. Orth and Yingyao Zhou from the Genomics Instituteof the Novartis Research Foundation.
PHOTO INFO:
Both photos are courtesy of: Sanford-Burnham Medical Research Institute

Top photo:
Dr.Sumit Chanda, associate professor in the Infectious and InflammatoryDisease Center at Sanford-Burnham Medical Research Institute and seniorauthor of the study.
Second photo:
MutantTLR9 (green) fails to traffic to endosomes (orange), a problem that canlead to autoimmune disease or increase susceptibility to infection.