Non-sensory G protein coupled receptors (GPCRs) are a large family of cell surface receptors, with over 360 identified members. Their involvement in many physiological processes and the possibility to use common assay platforms to develop drugs modulating their response made them hugely successful for therapeutic intervention: FDA-approved drugs were developed for 20 percent of them, and these drugs represent approximately 40 percent of all approved drugs (Overington et al., 2006). GPCRs are still very actively used in new drug discovery programs and, during the last four years, drugs have been approved by FDA for—on average—more than three new, previously untargeted, GPCRs per year.

In addition, in the past few years, new findings about GPCRs' biology demonstrated that they are more complex than initially seen, in four ways in particular.

First, GPCR can signal through heterotrimeric G-proteins, but also via direct activation of other partners like ß-arrestins or indirect activation of receptors tyrosine kinase, both of which participate to GPCR signaling to kinase pathways, for example.

Second, there is increasing amount of evidence for biased agonism. This phenomenon, also referred to as "stimulus trafficking" or "collateral efficacy," is based on the observation that some GPCRs' agonists may activate, through the modulation of a single type of GPCR, different signaling pathways with varying efficacies and/or potencies. For example, Galandrin et al (2008) showed that propranolol, known as an inverse agonist to the ß1-adrenergic receptor (thus inhibiting and decreasing by this effect the level of cAMP that is raised by ß1-adrenergic receptors agonists), is acting as an agonist when looking at ß1-adrenergic receptor induced ERK1/2 phosphorylation.

Third, many GPCRs can form heteromers with themselves or with other GPCRs. The formation of such heteromers can for example change the coupling of GPCRs, the potency and efficacy of their agonists, and allow the blockage of their signaling by antagonists of the partner GPCR (reviewed by Rozenfeld and Devi, 2010).

Fourth, the signal transduction of a GPCR can vary depending of the cellular background, due to features such as its level of expression and the nature of the coupling proteins available, to name two (for an example, see Lodge et al., 2010).

Recombinant cell lines expressing stably a receptor of interest are still widely used in drug discovery. They present some clear advantages such as the availability in large quantities of cellular material, and the possibility to examine a single receptor subtype, which are particularly important at the initial stages of drug discovery programs. Also, the high receptor expression levels that recombinant cells allow to attain is needed for certain assays.

However, it is clear that receptor signaling and pharmacology can be modulated by several features that may not be well represented in such recombinant models. As a consequence of that, cellular models that are closer to the physiological situation, such as primary cells and stem cells, have increasing interest in the research and drug discovery areas. These cellular models should ideally be introduced early in the drug development process to ensure that the selected compounds possess the right and meaningful profile of activity.

It is also important to have the tools allowing analyzing the receptor function when working with such cellular models, and to look at different aspects of the signal transduction in these cellular models.

GPCRs can be classified in four families according to the type of Gα proteins they can activate: Gαs (stimulation of adenylyl cyclase, resulting in an increase in intracellular cAMP concentration [cAMPi]), Gαi/o (inhibition of adenylyl cyclase resulting in a decrease in [cAMPi]), Gαq/11 (stimulation of phospholipase C) and Gα12/13 (activation of small G proteins).

Gαs- and Gαi- coupled receptors represent approximately 30 percent and 50 percent of the GPCRs for which the coupling is known, and it follows that assays measuring [cAMPi] can be used to record activation or inhibition of almost 80 percent of the non-sensory GPCRs.

There are many commercially available kits for measurement of [cAMPi]; however, they differ in their sensitivity and ability to work under challenging assay conditions. The most effective and efficient technologies help researchers yield the highest sensitivity and signal window, and provide for more accurate results, even when miniaturizing protocols for the most "difficult to screen" targets, including Gi-coupled GPCR antagonist assays.

Many researchers have turned to proven assays that use a simple and proven TR-FRET protocol for easy and precise adoption in a range of HTS applications, including 1,536-well formats and endogenous receptors testing.  Furthermore, as many high-throughput assays fail to generate reproducible data when cAMP levels are very low, the research community is looking for maximized signal stability, which provides new insights into GPCRs research. 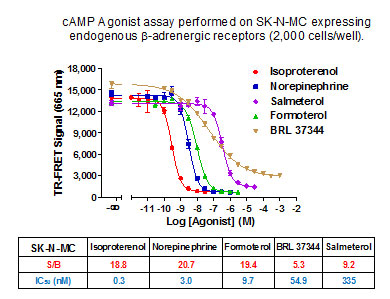 The use of frozen cells for cell-based screening has become widely accepted within the drug discovery community. Separating cell production from the actual screening campaign not only increases your flexibility but also improves the data consistency and decreases the downtime in screenings as the cellular material can be controlled and validated before running the HTS assay. Therefore, there is a lot of interest in using frozen, ready-to-use cells at various stages of pre-clinical drug discovery programs, from HTS to hit confirmation and lead selection to full compound profiling. One of the methods used to deliver frozen cells as a consumable to the end user is to gamma-irradiate the cells, so that cells can not resume growth after thawing.

Recently demonstrated for a set of 80 GPCRs, coupled to Gαi, Gαs and Gαq proteins, is that gamma-irradiated cells can be used in MEK1, ERK, CREB and Akt assays, which provides easily accessible and commercially available tools to characterize the activity of selected compounds regarding other aspects of signal transduction of the drug target, as well as their specificity of action versus other GPCRs. 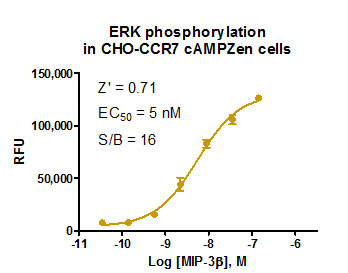 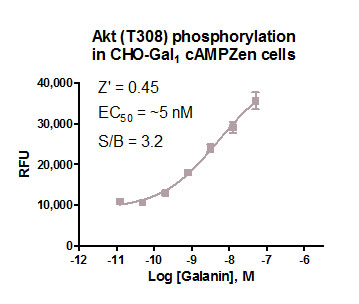 As explained above, there is increasing interest in using primary cells in research and drug discovery. In recent years, the Ca2+-sensitive photoprotein Aequorin has gained more and more popularity due to its excellent signal quality and ease of assay implementation. Aequorin was transiently transfected in human umbillical vein endothelial cells (HUVEC) and human microvascular endothelial cells from the lung (HMVEC-L) primary cells, for example, using a novel, non-viral nucelofaction-based transfection technology designed for the needs of primary cells and difficult-to-transfect cell lines.

This method, which facilitates efficient transfection of primary cells, has helped to aid in pushing the envelope for further discovery using a physiologically relevant cellular model. As histamine is known to be a vasocative substance acting on some endothelial cells, where it triggers intracellular calcium increase, we used it as a model agonist to activate cells transiently transfected with Aequorin. There are four histamine receptors described to date (H1-H4) which are all members of the GPCR family, naturally coupling to Gαq/11 (H1), Gαs (H2) and Gαi/o (H3 and H4) proteins. The main class of G proteins that lead to activation of the phospholipase C (PLC)-calcium flux pathway are the Gαq/11 proteins, but calcium influx through receptors normally coupled to Gαi/o or Gαs has also been described; indicating either activation of PLC by Gαi/o proteins, or secondary couplings for the receptor of interest. The pharmacology profile observed in HMVEC-L cells points to a response of a H1 endogenous receptor. 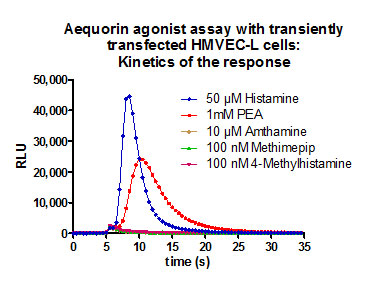 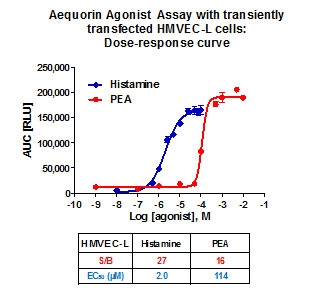 Traditional GPCR assays invariably target measurements of a unique activity in the cell such as second messenger quantification or reporter gene activation, several times ignoring effects on parallel pathways which can hugely contribute to the final result of the activation.

Recently, label-free technologies have emerged as powerful platforms to observe receptor signaling via the recording of an overall modification of the cell. Whole cell morphological responses are measured in a non-invasive manner and such assays can be viewed as "integrative" assays, as any pathway activation that will result in morphological changes will result in a signal using this method.

Progresses in tools for recording different pathways activated by GPCRs in frozen, ready-to-use, cells as well as in primary cells as exposed above opens possibilities to develop in shorter timeframes drugs with better controlled profiles of action. Indeed, a full collection of frozen cells available from the shelves provides new means to perform HTS and profiling studies in a variety of assays, and the high sensitivity of new kits and methods allows early assessment of compound activity in cellular models that reflect better the physiological situation.

I would like to thank Ron Osmond and Henry Martin-Harris (TGR Biosciences), Alice Gao (Corning), Corinna Thiel (Lonza) and Stéphane Parent and Jaime Padros (PerkinElmer) for providing the data presented as examples in this article.
Author bio
Vincent Dupriez, Ph.D., is Principal Scientist, Bio-discovery at PerkinElmer. He joined PerkinElmer in July 2007, specializing in theresearch of cell line and assays development, and is involved ininternal research and collaborations with external partners. VincentDupriez holds an engineering degree (1991) and a Ph.D. in Agronomicsciences and biological engineering (1997) from the University ofLouvain, Belgium.