The cure for deadly staph infections may have been sitting on pharmacy shelves for years.

In a new study, scientists found that the common flu medication, Tamiflu, protects mice from bloodstream Staphylococcus aureus infections by preventing their platelet levels from dropping dangerously low. The findings not only reveal a new connection between platelets and S. aureus, but could also lead to a ready-made treatment for patients suffering from these deadly bacterial infections.

While skin infections by S. aureus are common and can be treated easily with antibiotics, bloodstream infections by the same bacteria are much more deadly. In fact, the mortality rate has hovered between 20-30% for decades.

“Patients are treated aggressively with antibiotics and still don't pull through,” said Victor Nizet, an infectious disease physician scientist at the University of California, San Diego (UCSD) and senior author of the Science Translational Medicine  study.

“It just shows that we probably need to learn a little bit more about infections, beyond simple chemicals that kill the bacteria in the test tube, but start probing the molecular mechanism for why this disease is happening,” Nizet continued.

Working with their colleagues at UCSD and the University of Wisconsin, Nizet’s team noticed that patients who did not recover from S. aureus bloodstream infections often had extremely low platelet counts, a state called thrombocytopenia, and high levels of an S. aureus-produced factor called α-toxin circulating in their blood.

“The α-toxin basically pokes holes in platelet membranes,” explained Randall Woth, a platelet biologist at the University of Toledo who was not involved in the study. This permeabilization activates the platelets.

“When a platelet becomes activated, the granules that are inside the platelet fuse with the surface and release their contents. And so the platelets tend to get much more sticky and aggregate together,” Woth added.

Under normal conditions, platelets only activate when they sense a cut in a blood vessel, where they then aggregate to form a clot to stop the bleeding. Once the activated platelets perform their duty, the body targets them for clearance.  But if some other stimulus activates platelets, like an S. aureus infection, problems arise.

The researchers found that when they infected mice with a mutated version of S. aureus that couldn’t make α-toxin, the mice lost fewer platelets and cleared the mutated S. aureus from the blood. Furthermore, if they placed the mutated bacteria in a dish with human platelets, the platelets killed the bacteria, suggesting that S. aureus produces α-toxin to neutralize platelets before the platelets can kill them. 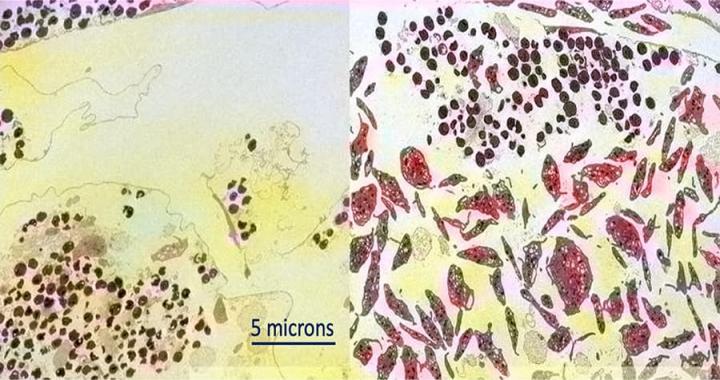 The researchers wondered if the platelet clotting drug, Ticagrelor (also known by the brand name Brilinta), might prevent platelet loss due to S. aureus infection. Doctors often prescribe Ticagrelor to patients who have suffered a heart attack or stroke because it blocks the P2Y12 receptors on the platelet surface, which are required for clotting.

According to Josh Sun, a pharmacy student at UCSD and a co-first author of the study, patients with bloodstream bacterial infections benefited from platelet clotting inhibitors in clinical studies.

“We decided to pursue this further by asking, ‘Why exactly are these patients being afforded more clinical benefit than patients who are untreated?’” Sun said.

When they administered Ticagrelor to mice infected with S. aureus, the mice showed no significant platelet loss, had fewer bacteria circulating in their blood and accumulating on their organs, and they survived longer than mice not given the drug. Ticagrelor also protected human platelets in a dish from destruction by S. aureus α-toxin, demonstrating that blocking platelet activation gave the platelets a chance to fight the infection.

But how exactly does Ticagrelor protect platelets from α-toxin-induced damage and clearance?

Normally, the body clears platelets by multiple different mechanisms. One important method is the Ashwell Morel Receptor (AMR) in the liver. During their normal aging process, platelets release an enzyme called sialidase that cuts sialic acid off of the glycoproteins that cover the platelet surface. This pruning exposes the underlying sugar, galactose, which the AMR recognizes to target the platelet for clearance.

The scientists found that patients infected with S. aureus had significantly more exposed galactose sugars on the surface of their platelets compared to healthy patients, and platelets exposed to S. aureus or α -toxin alone increased their sialidase activity, while treatment with Ticagrelor reduced platelet sialidase activity.

The most striking finding, however, came from mice that lacked the AMR; upon S. aureus infection, they had no platelet loss and survived at much higher rates than mice with the AMR.

Rather than simply damaging platelets, S. aureus is much more sinister: it gets rid of the platelets that can kill it by triggering the release of the platelet’s own sialidase, causing them to prematurely age, which then targets them for destruction by the body’s own platelet clearance mechanisms.

This discovery, Nizet said, opened up opportunities for drug repurposing by targeting the sialidase pathway.

Tamiflu, a pharmacy staple, targets influenza sialidases to dampen flu symptoms, but there is some evidence that it can also target non-viral sialidases. In fact, in mice infected with S. aureus, Tamiflu blocked the desialylation of platelets, reduced the degree of platelet loss, and prolonged the lives of the mice.

“It's not surprising to me that the P2Y12 inhibitors prevent the platelet activation because that's what they're designed for, but the fact that this antiviral agent can do the same thing, I thought [that] was really novel,” Woth said.

“Looking at the mechanistic models of thrombocytopenia,” Woth wondered, “could things like sialylation inhibitors play a role and be used as maybe therapeutic targets?”

Carsten Deppermann, a platelet biologist at the Universitätsklinikum Hamburg-Eppendorf, who was not involved in the study, was also very impressed with the research, especially its support of platelets’ increasingly important role as immune cells. “[It’s] another confirmation that platelets can do much more than just clotting, and then inhibiting them helps you also fight sepsis,” he said.

Nizet and his team hope that these findings show scientists and clinicians that antibiotics are not the only weapons against infectious diseases; shoring up the immune system can be just as important.

“What's happened in a patient is, for some reason, their immune system got distracted, or bacteria penetrated deeper into the body, and they temporarily got the upper hand,” Nizet said. “We could just try to help the general well-being of the immune cell, make it more efficient at generating energy [or] better able to repair its membranes.”

“Maybe there's something that we have already in our hospital pharmacy that could influence things and allow our antibiotics to work better,” he said.