The institution of inter partes review (IPRs) for granted patents by the Patent Trial and Appeal Board (PTAB) of the U.S. Patent and Trademark Office was one of the major changes in U.S. patent law under the Leahy-Smith America Invents Act of 2012. The AIA was the first major revision to patent law in the U.S. since the 1952 Patent Act, and IPRs (along with covered business method patent review and post-grant review for patents obtained under the “first inventor to file” standard enacted by the law) was intended to weed out improvidently granted patents that some sectors complained were an impediment to commercialization of innovative products.
The biotechnology and pharma sectors were disproportionately unaffected in the early days of the law’s implantation, but recently IPRs (which are available throughout a patent’s term) have become a tool for generic drug makers and others to challenge patents on innovator company drugs. These proceedings have been in addition to rather than instead of conventional ANDA litigation, and the lower claim interpretation standards used by the PTAB have increased the risk that important patents on blockbuster drugs will be invalidated.
Allergan recently devised a clever and (for now) entirely legal way to avoid IPR proceedings, by availing itself of sovereign immunity protection. Allergan did this by assigning to the St. Regis Mohawk Nation (SRMN) its patent rights covering its Restasis (Cyclosporine Ophthalmic Emulsion 0.05%) product used for chronic dry eye. The various tribes of Native Americans have been held to enjoy sovereign immunity, albeit with certain limitations that do not apply to the States. The immunity stems from common law rather than by statute or Act of Congress.
With regard to sovereign immunity more generally, it is provided by the 11th amendment to the Constitution which reads:
The judicial power of the United States shall not be construed to extend to any suit in law or equity, commenced or prosecuted against one of the United States by citizens of another state, or by citizens or subjects of any foreign state.
Sovereign immunity has been used by public universities to avoid IPR proceedings, where the universities claimed the immunity as “arms of the state” (see Covidien LP v. Univ. of Fla. Research Found. Inc.; Neochord, Inc. v. Univ. of Md. et al.; and Reactive Surfaces Ltd, LLP v. Toyota Motor Corp.).
Congress has the power to abrogate tribal [but not a state’s] sovereign immunity, under the Supreme Court’s decision in United States v. Lara, 541 U.S. 193, 200 (2004), that “the Constitution grants Congress broad general powers to legislate in respect to Indian tribes, powers that we have consistently described as ‘plenary and exclusive.’“ However, Congress can do so only if the intent is “clear and unambiguous” or “unequivocally expressed.” Santa Clara Pueblo v. Martinez, 436 U.S. 49 (1978); see also Michigan v. Bay Mills Indian Cmty., 134 S.Ct. 2024 (2014).
Allergan paid SRMN $13.75 million upon transferring these patents, which SRMN licensed to Allergan for $15 million per year until the patents expire on August 27, 2024. The benefits to both Allergan and SRMN can be appreciated by the estimates of revenues for Restasis: 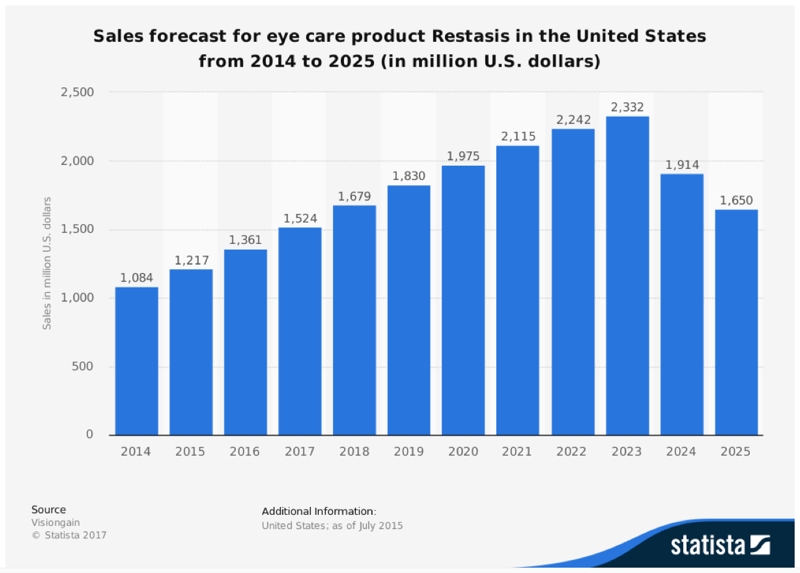 (Chart obtained here.)
For some this development, while on its face consistent with the law, rankles. In earlier sovereign immunity cases the inventors (usually university personnel) were obligated (inter alia, under the Bayh-Dole Act) to assign their inventions to the university, and state universities were readily recognized as arms of the state for whom the immunity applied. Here, Allergan is unabashedly obtaining the benefit of tribal sovereign immunity in a commercial transaction. While such a transfer is well within Allergan’s rights to alienate these patents as a private property right, avoidance of IPR as not only a consequence but the express intent of the transfer distinguishes this use of sovereign immunity from other instances. (And of course it remains to be seen whether patents are exclusively a private property right or more in the nature of a government grant, see Oil States Energy Services, LLC v. Greene’s Energy Group, LLC).
Recent history suggests that, at a minimum, Congress will want to hear from the parties on this arrangement. But in light of earlier controversies like Mylan’s Epi-Pen cost increase and the Martin Shkreli affair at a Turing Pharmaceuticals, as well as more general concerns about patent quality and validity and increasing drug costs, it is likely that there will be some effort in Congress to prevent maneuvers such as this one. The courts have made it clear that any limitation on SRMN’s sovereign immunity is solely within the “plenary power” of Congress. But passage of such a measure must remain in doubt in the current political climate, given the inability of Congress to pass legislation its members seem to be much more committed to than such an esoteric question as sovereign immunity, no matter how relevant the issue may be to their constituents’ access to affordable drugs.
Kevin Noonan is a partner with the law firm McDonnell Boehnen Hulbert & Berghoff LLP and represents biotechnology and pharmaceutical companies on a myriad of issues. A former molecular biologist, he is also the founding author of the Patent Docs weblog, http://patentdocs.typepad.com/.
Sep 13, 2018|4 min read