Top Image:
Staphylococcus aureus can cause deadly and difficult to treat infections.
iStock/Dr_Microbe

He might get the awards and the recognition, but Victor Torres, a microbiologist at New York University Grossman School of Medicine, doesn’t want the credit. Without his talented lab members, Torres insists that his team’s Staphylococcus aureus research would not be possible. 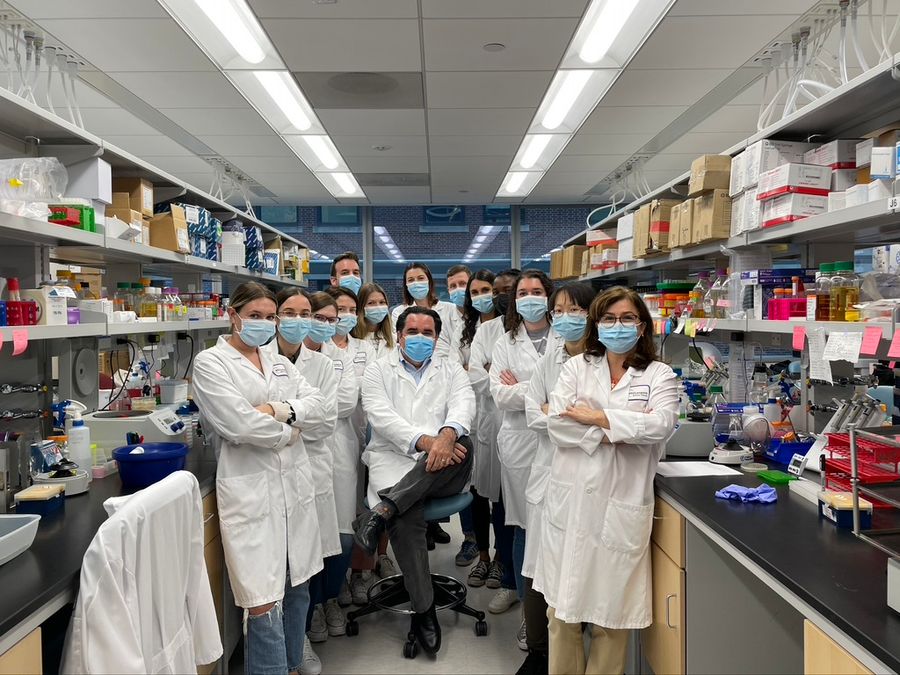 Victor Torres shares his S. aureus research accomplishments with his talented lab members. “This is all the result of outstanding people who put in everything that they have to work together,” he said.
Credit: Victor Torres

A native of Puerto Rico and a recent MacArthur Fellowship recipient, Torres studies the complex biology and host-pathogen interactions of the bacteria, S. aureus. By collaborating with academic and industry scientists, he hopes to develop new therapeutics to combat these deadly pathogens.

S. aureus can make itself at home in almost any environment. “There is a one in three chance that you, right now, have Staph aureus in your nose or on your skin,” said Torres. “But the same organism can cause very virulent skin infections.”

If S. aureus gets into the bloodstream, it can mount a lethal infection. The bacteria also infect bone, causing osteomyelitis, and infiltrate hip replacement hardware.

Even after decades of research on S. aureus host-pathogen interactions, “we still don't have a clinically approved vaccine, antibody, or biologic, and that is, in part, due to the fact that we don't understand the rules of engagement,” said Torres.

Through a multi-year collaboration with Janssen Biotechnology, Torres’ team has made advances in new potential treatments for S. aureus infections with more discoveries on the horizon.

How does S. aureus go from a benign commensal microbe to a deadly pathogen?

We don’t know, but what we do know is that it doesn't rely on one virulence strategy such as a major adhesin, protease, or toxin. It has many toxins, proteases, and adhesins, which makes it very complex when we are trying to pick our poison. If we think about other global pathogens such as Streptococcus pneumoniae, we can create a vaccine against the capsule, a polysaccharide shell around the bacterium, and we’ll save millions of people. That doesn't work with S. aureus because some of the strains have capsules, but some don’t. Additionally, if S. aureus gets eaten by human phagocytes and neutrophils, it can survive inside and kill the neutrophil. It can then use the neutrophil as a Trojan horse to disseminate, and we don’t know how that happens. Because we haven't been able to contain it, it's becoming more antibiotic resistant. So far, every vaccine that has been tried has failed to reach a positive endpoint.

How did your collaboration with Janssen Biotechnology to develop a vaccine for S. aureus come about?

When I started my lab in 2008, we knew that humans who have defects in neutrophil functions are extremely susceptible to S. aureus infection. Scientists have known for a hundred years that S. aureus produces toxins that kill neutrophils. It’s a microbe that is extremely potent at killing the main line of defense against infection. The bacteria produce toxins that interact with the plasma membrane and assemble into little mushroom-like pores to poke a hole in the cell.

We identified a molecule that is responsible for the activity of the toxin, and then identified the cellular factors that the toxin uses. We disentangled the contributions of different S. aureus toxins to its pathogenesis. With those discoveries, we reached out to biotech companies to find partners to develop an antibody-based biologic for S. aureus infection, and the company that answered the call was Janssen Biotechnology.

What advances has this collaboration led to so far?

At the end of the first phase of the project, we generated an antibody-based biologic that was very potent at neutralizing S. aureus toxins. We showed that we could engineer them as a new class of toxin inhibitors, and that they work in vitro, ex vivo, and in preclinical animal models of S. aureus infection (1). We finished the second phase of that project, and we’re about to submit those findings for publication.

We’ve now started working with Janssen on vaccine development. We established that these toxins can be engineered as vaccine antigens, and we tested them in mice (2). But S. aureus is a human pathogen, and it produces a large number of virulence factors that are not active in mice. The group at Janssen developed a brand-new preclinical model for Staph aureus: minipigs.

Minipigs are fascinating because they are natural hosts of S. aureus. Minipig immune cells are susceptible to some of our favorite S. aureus toxins, while mice are not. So, for the first time, we established not just a new model of wound infection in the minipig, but also the protective vaccine potential of one of our favorite molecules, which showed remarkable efficacy (3).

How has the MacArthur Fellowship influenced you as a scientist and mentor?

If you would have asked me 25 years ago if I could see myself being a scientist, running a lab, and getting the MacArthur Fellowship, I would not have predicted this in my wildest dreams. I was a nontraditional student. I am here because a lot of people believed in me. I got an accommodating fellowship when I was an undergraduate even though I failed my first year in college. Somebody took a risk on me and gave me opportunities.

With the MacArthur, I now have an opportunity to provide resources and opportunities to other people in Puerto Rico. There is a need to identify those people who need a break. They may become the next inventors of the most needed vaccines for microbiology.

Losmapimod as potential treatment for COVID-19

Losmapimod as potential treatment for COVID-19