Top Image:
Omicron has more mutations relative to the original SARS-CoV-2 strain than any previous variant. While the delta strain only has two mutations in the RBD, omicron has 10.
iStock/CIPhotos

COVID-19 has gotten a little better at infecting cells and dodging antibodies with each set of mutations in new variants. Omicron is the best at dodging antibodies, but its modified structure sacrificed virulence for antibody resistance.

The omicron variant of SARS-CoV-2 contains a whopping 60 mutations compared to the original Wuhan strain, a striking number that garnered widespread media attention and concern from researchers. The highly mutated variant is efficient at evading vaccine- and natural infection-induced antibodies and antibody treatments. But its stealth came at a cost.

The full sequence of the omicron variant was first released on November 24, 2021. Scientists identified it as a variant of concern only two days later due to its high mutational burden, particularly in the spike protein, which mediates SARS-CoV-2’s entry into cells via the ACE2 receptor. Omicron’s spike protein carries 37 mutations; its predecessor, gamma, has 12 mutations in its spike protein.

Researchers raced to understand the effect that these mutations had on the virus’ structure, namely, how they influence virulence, transmissibility, and antibody evasion. Previous iterations of SARS-CoV-2, such as the delta variant, showed increased ACE2 affinity along with increased resistance to antibodies. However, omicron doesn’t seem to bind the ACE2 receptor with higher affinity than the delta variant, an unexpected lack of edge over the previous variant (1, 2). Some researchers even found that the virus was worse at entering cells (3). The small structural changes in SARS-CoV-2 provided new understanding of what the virus might compromise to outsmart antibodies.

“If you have a piece of Velcro on your shoes, and a little rock gets in the middle of the Velcro, it won’t stick as well. On the other hand, if you put some rock and then cut a divot somewhere else, maybe you can compensate for it,” said Sriram Subramaniam, a structural biologist at the University of British Columbia who published the first structure of the omicron variant spike protein (1). “Every time you try to put a wrench in [the SARS-CoV-2 spike protein], it can compensate with something else. You have to think in terms of the broader interface.” 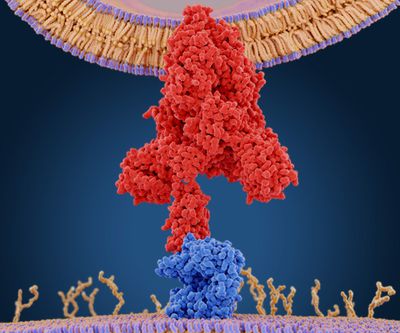 The spike protein (red) binds to the ACE2 cell receptor (blue) via its RBD domain.
iStock/selvanegra

The spike protein has plenty of room to compensate for erroneous mutations. It’s a 200 kDa protein containing two key domains: the receptor binding domain (RBD) and the N-terminal domain (NTD). The RBD makes up nearly a fourth of the entire spike protein and is the main point of interaction between the ACE2 receptor and the virus; it’s also the main site targeted by antibodies. Colby Ford, a computational biologist at the biotech company Seagen, described the RBD as a “handshake looking structure.”

The RBD harbors 15 mutations in the omicron variant, a leap from the 7 reported in the delta variant. Many of the effective COVID-19 antibodies used in treatments and produced in reaction to the vaccine or natural infection don’t recognize the omicron variant. Since the RBD structure is critical for SARS-CoV-2 infectivity, its structure has been highly conserved across variants. The NTD, however, is more susceptible to mutations, and therefore less often targeted by antibodies; omicron has 11 mutations in its NTD.

“It’s not surprising that we see large changes in the NTD again. If you look at the NTD among all the variants, each variant has its own unique way of remodeling the NTD, which is really suggesting that nothing specific is required for its function,” said Bing Chen, a virologist and structural biologist at Harvard Medical School. “Omicron has its own unique way to remodel the NTD. All the surface-exposed areas have been reconfigured, consistent with loss of antibody recognition against the NTD almost completely.”

Chen’s team discovered that omicron was less effective at entering cells when he exposed the cells in culture to full length omicron spike proteins (2). He and his team compared the protein’s ability to bind to ACE2 and enter the cells via fusion to previous variants, including alpha, beta, and delta variants. Previous variants did not differ in their abilities to fuse to cells, but omicron’s spike protein was less efficient than all other variants.

Although others report that omicron is better at binding to ACE2 than the original variant and is just as effective as delta is, Chen’s team discovered that the variant only enters cells that highly express ACE2. When the researchers expressed a low level of ACE2 in cells, other variants’ spike proteins, especially delta which is better at cell entry (5), easily entered the cells. But omicron’s spike protein didn’t enter cells at all. The researchers expressed ACE2 at varying levels in cells and found that omicron’s spike protein required the receptor to be expressed ten times more than was required for other variants to enter cells at a similar rate. Other researchers have confirmed these results (4).

“It’s actually quite puzzling,” said Chen. “It doesn’t make any sense. Why would engaging with ACE2 better not give you better membrane fusion activity?”

Chen believes that the answer lies in a key structural change. The hand-like RBD must open to the “up” position to initiate a handshake with ACE2. Although many of the mutations in the RBD help it interact with the ACE2 receptor, one makes it harder for the protein to open.

Subramaniam found Chen’s findings “interesting.” They mirror the results of his own structural analysis of the omicron spike protein bound to ACE2. He found that many of the mutations in the RBD of omicron are detrimental to its interaction with ACE2, but in the end, the mutations enhancing ACE2 binding won. But seeing the detrimental effects of those mutations on other processes widens understanding about how omicron works and how antibody therapeutics can be designed in the future to avoid omicron’s antibody evasion.

“The [current] antibodies block the first stage. If you have molecules that block binding, such as RBD binding inhibitors, they block the second stage. But if you could somehow block fusion, then you’re going one step further. You’re basically agnostic to the first two steps because [the virus] can evade any antibody that it likes and binds as it likes, but you can still block it,” said Subramaniam. “The significance [of this finding] might be if we can use this insight to design ways to block the fusion as a therapeutic approach.”

A pandemic lost in translation

A pandemic lost in translation

At the forefront of cancer research

At the forefront of cancer research

Special Report on Immunology & Autoimmunity: Turn of the coin

Special Report on Immunology & Autoimmunity: Turn of the coin