SAN DIEGO—Locanabio Inc. has reported that results from a preclinical study of its therapeutic systems for the potential treatment of myotonic dystrophy type 1 (DM1) were published in Nature Biomedical Engineering.

“We believe that RNA-binding proteins that are engineered to manipulate disease-causing messenger (mRNA) is the next frontier of genetic medicine,” says Dr. Jim Burns, CEO of Locanabio. “We are very excited about being at the forefront of this technology platform, which can manipulate RNA by several different mechanisms (e.g., destroy dysfunctional RNA, destroy RNA and replace it with a normal gene, enhance RNA translation to produce more of a specific protein, modify splicing and RNA editing). The platform has shown to be a very powerful and versatile approach to modifying disease-causing RNA, and we believe it has the potential to significantly impact patients living with devastating genetic diseases.”

DM1 is an autosomal dominant genetic disorder which affects skeletal muscle, cardiac muscle, the gastrointestinal tract and the central nervous system. It is caused by a mutation in the myotonic dystrophy protein kinase (DMPK) gene. This mutation leads to a repeat expansion of the cytosine-thymine-guanine (CTG) trinucleotide. The expanded CTG is transcribed into toxic cytosine-uracil-guanine (CUG) repeats in the DMPK mRNA. These toxic mRNA repeats lead to disease symptoms, which include progressive muscle wasting, weakness and myotonia, a hallmark of DM1.

Scientists at Locanabio, working with academic collaborators at University of California, San Diego (UC San Diego) School of Medicine and the University of Florida, assessed whether an RNA-targeting CRISPR Cas9 system (RCas9) could provide molecular and functional rescue of dysfunctional RNA processing in a DM1 mouse model. The RCas9 system was administered with one dose of an AAV gene therapy vector.

“There are a few unique features of our RCas9/AAV9 system that position it as a potentially important treatment option for myotonic dystrophy type 1,” notes Burns. “This is the first time that a system has been designed to specifically bind to disease-causing RNA and then destroy that RNA. In the case of DM1, the system is designed to target the mutation in the DMPK gene that causes the disease. This approach is advantageous because it does not alter a cell’s DNA or the normal allele of the gene; it destroys only the toxic RNA that is directly responsible for symptoms of DM1.”

“The fact that our RCas9/AAV9 system acts directly on the toxic disease-causing RNA also makes it a very potent treatment approach. In addition, our system is delivered with an AAV vector-based gene therapy (AAV9, specifically) and preclinical data has shown this to be a durable approach following a single administration,” he adds.

Results in both adult and neonatal mice—using both intramuscular and systemic delivery—showed prolonged RCas9 expression even at three months post-injection, with efficient reversal of molecular (elimination of toxic RNA foci, MBNL1 redistribution, reversal of splicing biomarkers) and physiological (myotonia) features of DM1.

“Importantly, there were no significant adverse responses to the treatment. There were also no observed tapering of effects during the study period,” Burns points out. “Given the demonstrated potency of our RCas9/AAV9 system, we anticipate a continued durable effect following this single-dose administration.”

“These results are consistent with earlier findings from several in-vitro studies in muscle cells derived from DM1 patients published by Locanabio’s scientific co-founder Dr. Gene Yeo of UC San Diego, and further indicate the significant potential of our RNA-targeting gene therapy as a DM1 treatment. Data show that our RNA-targeting system is able to destroy the toxic RNA at the core of this devastating genetic disease and thereby correct the downstream molecular and biochemical changes that result in myotonia, which is a hallmark symptom of DM1,” he noted.

“According to Yeo, these data demonstrate that RNA-targeting systems may efficiently and specifically eliminate toxic RNA repeats that cause DM1 and potentially lead to a more effective treatment option for patients. The results also indicate that RNA-targeting gene therapy has potential applications in the treatment of other diseases, such as Huntington’s disease and certain genetic forms of ALS, which are also caused by a buildup of toxic RNA repeats.”

“Our next step is to assess our lead RCas9 candidate in IND-enabling studies,” explains Burns. “Based on positive preclinical data thus far of our unique treatment approach, we are also developing two additional RNA-binding protein systems (called Cas13d and PUF) and considering them as potential candidates as well. We expect to make a decision on which RNA-binding system we will advance in early 2021.

“After we select our final candidate, we will move into IND-enabling studies and anticipate our first IND filing in the second half of 2022. We look forward to advancing our final candidate and hopefully moving into clinical studies as quickly as possible.” 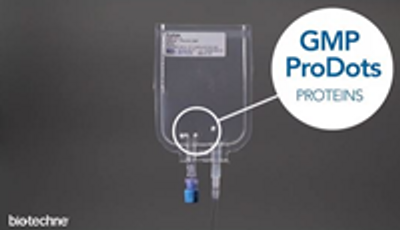