CAMBRIDGE, Mass.—Zebrafish have long been considered an ideal organism for large-scale in vivo genetic and chemical studies of many processes that cannot be replicated in vitro due to their small size, genetic similarity to humans, optical transparency of complex organs and ease of culture. But what happens if you're a researcher and are conducting experiments that require a large number of animals, or you're testing the effects of many different drugs? It may take several minutes to examine each and every larva, but a team of academic researchers at the Massachusetts Institute of Technology (MIT) is set to hit the market with a new technique that can analyze larvae in seconds, enabling efficient, large-scale studies.

The researchers have unveiled this new method, which they call vertebrate automated screening technology (VAST), in a study published in the July 18 issue of the journal Nature Methods. The study describes the MIT team's effort to improve the throughput and complexity of zebrafish screens by automatically manipulating and imaging zebrafish at cellular resolution in three dimensions. 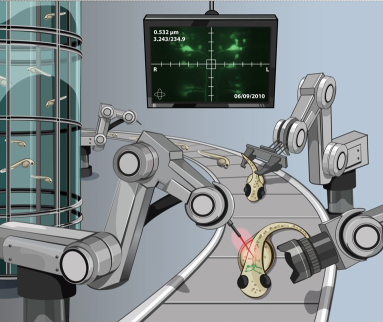 Mehmet Fatih Yanik, associate professor of electrical engineering and computer science, at MIT and the study's lead author, notes that despite a significant need for high-throughput, automated studies on whole animals at high resolution, the processes currently used to do so are too slow and unreliable for high-throughput screens. Visualizing most zebrafish organs requires manipulating and properly orienting the larvae. Even with confocal or two-photon microscopy, optical access is often impeded by pigmentation, by intervening organs such as eyes and heart or by the highly autofluorescent yolk sac, as noted by the MIT team in their study. Current methods to address these challenges involve treatment with the toxic chemical phenylthiourea to suppress pigmentation, manually transferring zebrafish from multiwell plates or reservoirs and manually orienting them in viscous media such as agar.

"People are currently doing this manually, which is too slow. Ours is the only system that can take a large library of chemicals and screen it on thousands of vertebrates," Yanik says.

Because each VAST cycle includes loading, detection, positioning, rotation, focusing, imaging, laser manipulation and dispensing, the technology enables both genetic and pharmaceutical cellular-resolution whole-organism screens. The system automatically loads zebrafish from reservoirs or multiwell plates and positions and rotates them for high-speed confocal imaging and laser manipulation of both superficial and deep organs. The entire process takes about 19 seconds per animal, compared to about 10 minutes for manual inspection, and results in no injury to the larvae.

To demonstrate the system's effectiveness, the MIT team imaged the neurons that project from the zebrafish retina to the brain. According to the researchers, VAST permits large-scale in vivo study of complex processes such as organ development, neural degeneration and regeneration, stem cell proliferation, cardiovascular, immune, endocrine and nervous system functions, pathogenesis, cancer and tissue specificity and toxicity of drugs.

"We're basically automating the most complex biological experiments that are performed in a laboratory," Yanik says.

Yanik acknowledges that it's rare for an academic research team to take technological matters into their own hands and develop laboratory tools, but he is already ahead of the game commercially. After patenting VAST, he founded his own company, Entera Pharmaceuticals, which will bring the technology to both the commercial and academic research markets within a year. The researchers are also working on further speeding up the system and developing ways to process the huge amounts of data generated by the imaging machine.

The study was funded in part by a National Institutes of Health (NIH) Innovator award. In a statement released by MIT, Jeremy M. Berg, director of the National Institute of General Medical Sciences, who helps lead the New Innovator Award program at the NIH, commended Yanik for "tremendous creativity and accomplishment early in his independent career."

"The development of these powerful technologies for the monitoring and manipulation of model organisms, such as individual zebrafish in a rapid fashion, is representative of one type of high-impact research that the NIH Director's New Innovators Award program was designed to promote," Berg stated.

From mutations to metabolism with spatial -omics

From mutations to metabolism with spatial -omics