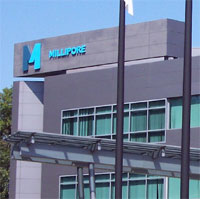 DARMSTADT, Germany—Seeking a stronger presence in the life sciences industry, global pharma and chemistry company Merck KGaA surprised many professionals in all of those sectors on Feb. 28, when it announced that it will acquire all outstanding shares of common stock of Millipore Corp., a technology, tool and service provider for bioscience research and biopharmaceutical manufacturing, for $107 per share in cash. The total value of the transaction, which has been approved by the boards of directors of both companies, is approximately $7.2 billion.

The announcement came out of left field, not only because it shows a new area of focus for Merck, but also because rumors circulated the week before that Thermo Fisher Scientific Inc., Millipore's neighbor in Massachusetts, made an unsolicited bid to acquire Millipore for $6 billion. That offer, says Millipore President and CEO Martin Madaus, "was a rumor," and while he declined to comment further, adds that Millipore "has always been driven forward by a strategy to focus on our growth as an independent company."

"This is good news for our employees, and it has been received well," Madaus says. "Over the past five years, we have transformed Millipore into a life science leader by driving innovation, entering new markets and generating exceptional operational performance. Today's announcement, which is the outcome of a thorough strategic review process, is a validation of the tremendous value of the Millipore brand and a testament to the value this transformation has created for all of our stakeholders. We are excited to join a high-quality company like Merck as we will gain greater scale and scope in the life science industry."

The combined entity is likely to generate annual sales of $2.7 billion. Millipore will retain its branding, headquarters in Billerica, Mass., and senior management. In addition, the 6,000 employees Millipore has in more than 30 countries will enter Merck's fold. Merck will fund the transaction through available cash and a term loan. Pending approvals by Millipore shareholders and government regulators, the deal is expected to close in the second half of the year.

As the ink dries on the transaction, this is all that is known about the changes it will mean for both companies, but Dr. Karl-Ludwig Kley, chairman of Merck's executive board, is adamant about one thing: "We view this transaction as a merger, not an acquisition," he stresses.

"Mergers are always about two cultures learning from each other and combining the best of both," Kley says. "The strengths of our two companies are complementary, which is true for both products and culture."

According to Kley, the deal will allow Merck to enter the biologics arena and balance out its business profile, which is divided between the manufacturing of liquid crystals and specialty pigments for the food, car and cosmetic industries, and the life sciences and laboratory services business. The latter will give both companies a foundation to develop technologies that are tailored more evenly to the needs of customers, Kley says.

"By combining Millipore's bioscience and bioprocess knowledge with our own expertise in serving pharma customers, we will be able to unlock value in our chemicals business and transform it into a strong growth driver for Merck. Through this acquisition, we will expand the overall product offering of the Merck Group, using the well-recognized Millipore brand in addition to our own brand," he says.

Kley notes that the deal also aims to expand Merck's global presence, as a base in Billerica would provide Merck with a strongentrée into the United States. In addition, as Millipore conducts about 40 percent of its business outside the United States, Merck will gain a stronger foothold in Europe, he adds.

"For Merck, the U.S. is our most important geographic asset, because our business in the U.S. today is much smaller than our other global businesses," Kley notes. "We think we have an excellent in some other countries, such as Japan, Taiwan, South Korea and India, so this merger has lots of regional benefits for both organizations. In addition, Millipore has a major franchise in the mature market of Europe, so I see enormous growth potential for the combined organizations."

The transaction with Millipore is "fully in line with Merck's acquisition strategy to focus on high-growth markets and high margins on specialty products," Kley says, but he declined to discuss any other acquisition plans that Merck may have in the works.

"We're focused on the consummation of this transaction first—and I want to note, this is not something we do on a daily basis," Kley says. "We strongly believe that the size and culture of our company is its only chance to deliver innovation, but we don't venture into things that we don't understand, and we try to stay very close to what we know—but we're gradually moving into sectors that are close to what we do now.

"We're always looking at new innovations, but we're not going to start producing refrigerators," he adds with a laugh.

Kley's openness and enthusiasm to talk about the deal is a sharp contrast to the vague media reports that are still swirling, with speculation that Thermo Fisher Scientific could counter Merck's offer, or that General Electric Co. may also make a play for Millipore. Despite the rumors, the companies are confident that the transaction will close as planned.

That confidence, combined with Merck's high offer for Millipore and Thermo's obvious interest in adding assets to its company, has prompted analysts to wax philosophical on other possible deals in the life sciences sector. Macquarie Research analyst Jon Groberg says the Merck-Millipore deal could "reset" the valuations for many life-science companies. Other analysts have noted that many life sciences companies are already trading at attractive valuations, including Millipore competitor Pall Corp., Landauer Inc., an analytical tools company with a niche in radiation monitoring, and Dionex Corp., a company that makes chromatography systems. Shares in these companies all got a boost amidst the scuttlebutt.
Jan 28, 2021|5 min read