BASEL, Switzerland—The end of May and start of June saw Roche issue three news releases in rapid succession about clinical trial results with some of its therapeutics, which showed increased patient lifespans without worsening and/or without return of disease in three different cancer indications: HER2-positive early breast cancer, advanced melanoma and refractory indolent non-Hodgkin’s lymphoma. 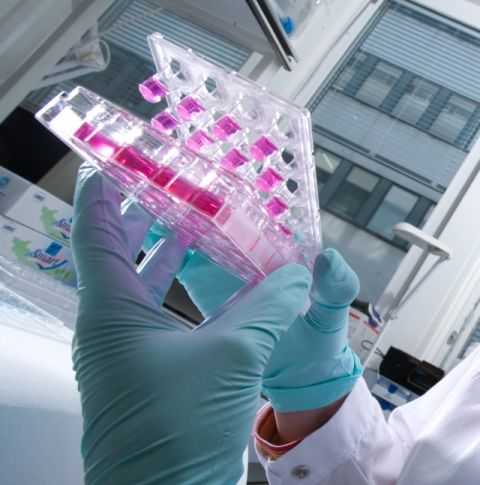 The most recent of the announcements, dated June 1, indicated that new data from the Phase 2 NeoSphere study suggest that Perjeta (pertuzumab) in combination with Herceptin (trastuzumab) and docetaxel chemotherapy given prior to surgery reduced the risk of the disease getting worse and increased the time people lived without their cancer returning compared to Herceptin and chemotherapy in people with HER2-positive early breast cancer. The safety profile of the Perjeta regimen was consistent with that seen in previous studies, and no new safety signals were identified.
In the NeoSphere study, both progression-free survival (PFS) and disease-free survival (DFS) were evaluated at three years. The results suggest that people who received the Perjeta regimen prior to surgery were 31 percent less likely to experience disease worsening, recurrence or death  compared to those who received Herceptin and chemotherapy. The results of this analysis are descriptive, Roche notes, as the study was not designed to show statistical significance for three-year PFS and DFS.
“These new results add to the body of data for Perjeta in the neoadjuvant setting, and we look forward to the Phase 3 APHINITY study results to better understand the broader impact of Perjeta in the adjuvant treatment of HER2-positive early breast cancer,” said Dr. Sandra Horning, Roche’s chief medical officer and head of global product development.
Perjeta is a medicine that targets the HER2 receptor, a protein found on the outside of many normal cells and in high quantities on the outside of cancer cells in HER2-positive cancers. Perjeta and Herceptin are believed to complement each other, as both bind to the HER2 receptor, but to different places, thus theoretically providing a more comprehensive blockade of HER signaling pathways and preventing tumor cell growth and survival.
One of two May 30 news releases announced follow-up data from two studies of the investigational MEK inhibitor cobimetinib in combination with Zelboraf (vemurafenib). Updated data from the pivotal coBRIM Phase 3 study showed the combination helped people with previously untreated BRAF V600 mutation-positive advanced melanoma live a median of one year (12.3 months) without their disease worsening or death, compared to 7.2 months with Zelboraf alone.
“These results are exciting because they underscore the importance of combining medicines that target the signals, which cause about half of all melanomas to grow,” Horning said.
The updated results from coBRIM also demonstrated higher response rates with cobimetinib and Zelboraf compared to Zelboraf alone.
Follow-up data from the Phase 1b BRIM7 study showed cobimetinib plus Zelboraf helped people who had not been previously treated with a BRAF inhibitor live a median of more than two years (28.5 months). In addition, extended follow-up showed 61 percent of patients who had not been previously treated with a BRAF inhibitor were alive after two years.
The cobimetinib new drug application for BRAF V600 mutation-positive advanced melanoma was granted priority review by the U.S. Food and Drug Administration, and a decision is expected by August 2015. The European Medicines Agency is expected to make a decision on Roche’s marketing authorization application for cobimetinib before the end of 2015.
Cobimetinib is designed to selectively block the activity of MEK, one of a series of proteins inside cells that make up a signaling pathway that helps regulate cell division and survival. Cobimetinib binds to MEK while Zelboraf binds to mutant BRAF, another protein on the pathway, to interrupt abnormal signaling that can cause tumors to grow.
In another May 30 news release, Roche announced results from the Phase 3 GADOLIN study showing that Gazyva/Gazyvaro (obinutuzumab) plus bendamustine followed by Gazyva/Gazyvaro alone provided significant benefit for people with indolent non-Hodgkin’s lymphoma that is refractory to MabThera/Rituxan (rituximab)-based treatment. In the study, Gazyva/Gazyvaro plus bendamustine followed by Gazyva/Gazyvaro alone reduced the risk of disease worsening or death by 45 percent compared to bendamustine alone. The study was stopped prior to its protocol-specified final analysis due to the high level of benefit seen in the Gazyva/Gazyvaro arm compared to the bendamustine arm. There were no unexpected safety signals identified with Gazyva/Gazyvaro.
“Unfortunately, some people with indolent non-Hodgkin’s lymphoma have disease that is refractory to MabThera/Rituxan-based therapy, a standard of care treatment. We’re excited by these data showing that Gazyva/Gazyvaro could help these people who have few treatment options remaining,” said Horning.
Gazyva/Gazyvaro is an engineered monoclonal antibody designed to attach to CD20, a protein found only on B cells. Gazyva/Gazyvaro is designed to attack and destroy targeted B cells both directly and together with the body's immune system.
Jun 11, 2018|2 min read