HEIDELBERG, Germany—Tumor necrosis factor (TNF) is a cytokine with a key role in the immune system, and it has been highly implicated and studied in cancer. Biopharmaceutical company Apogenix is one of many targeting this cytokine, and recently shared encouraging efficacy data for one of its immuno-oncology programs. The results were published in a paper titled “HERA-GITRL activates T cells and promotes anti-tumor efficacy independent of FcγR-binding functionality,” which appeared in the Journal for ImmunoTherapy of Cancer.
Apogenix’s HERA-ligands are novel tumor necrosis factor superfamily receptor agonists. As the company explains, “By stimulating different TNF signaling pathways, these HERA-ligands can increase the anti-tumor immune response. The specific molecular structure of Apogenix’s HERA-ligands induces a well-defined clustering of functional TNF receptors on the surface of target immune cells. In contrast to agonistic antibodies, Apogenix’s fusion proteins are pure agonists whose potent signaling capacity is independent of secondary Fcγ receptor-mediated crosslinking. In addition, HERA-ligands cause neither antibody-dependent cellular cytotoxicity nor complement-dependent cytotoxicity and exhibit a shorter half-life than antibodies.”
HERA-GITRL is a hexavalent GITR receptor agonist that acts on immune cells directly to boost their anti-tumor immunity. As the authors explain in their paper, “HERA-GITRL is composed of a trivalent but single-chain GITRL-receptor-binding-domain (scGITRL-RBD) unit fused to an IgG1 derived silenced Fc-domain serving as dimerization scaffold … GITR signaling, induced by its ligand (TNFSF18, GITRL), expressed by APC populations, plays an important role in regulating immune responses by providing co-stimulatory signals to boost T cell activation, differentiation, survival and memory formation.”
“GITR has been a key immunotherapeutic target for almost 20 years and multiple strategies to induce GITR signaling have been investigated,” they add. “The limited clinical efficacy of GITR agonists results from structural and functional characteristics of antibodies, including the presence of only two target-binding domains per molecule, that are unsuitable for stimulating the TNFRSF [TNF receptor superfamily].”
“We have developed HERA-GITRL, a potent GITR receptor agonist, to overcome the shortcomings of antibody-based approaches,” said Dr. Thomas Hoeger, CEO of Apogenix. “While our HERA-ligands work well as standalone therapies, we are also assessing the synergies with traditional cancer therapies as well as other immuno-oncology therapeutics. HERA-GITRL and our other HERA-ligands have the ability to boost T cell priming and will therefore work well in combination with immune checkpoint inhibitors which depend on the presence of previously primed anti-tumor T cells. We look forward to advancing our HERA-ligands to the clinical stage.”
The researchers report that they isolated naive CD4+ T cells, which were then stimulated in vitro. When HERA-GITRL was administered, it resulted in a significant increase in the proliferation and differentiation of the stimulated T cells, with no response from unstimulated T cells, according to the paper. This implies that “an antigen-specific and TCR-mediated signal is required for the GITR-mediated enhancement of T cell activity,” something the authors state is “a clear advantage over non-specific strategies, such as checkpoint inhibition or cell depletion-based therapies, that lead to serious immune-related adverse events (irAE) due to their broad mechanisms of action.” HERA-GITRL showed anti-tumor activity in two models, with dose-dependent tumor growth inhibition.
In addition, small-scale studies were conducted in mice and monkeys which showed that HERA-GITRL had “a terminal serum half-life of 1.5 days in cynomolgus monkeys and seven hours in mice” with no toxicological signs related to the compound, as reported in the paper.
Apogenix noted in a press release that these results reinforce previous findings that HERA-GITRL can achieve optimal stimulation of TNF superfamily receptors thanks to its hexavalent structure mimicking that of the natural ligand, while bivalent compounds seem to fall short due to structural and functional issues, such as only having two target-binding domains.
Apogenix has five other programs in its pipeline that are based on its HERA-ligand technology platform and are also being advanced in hematologic and solid tumors. Of those, HERA-TRAIL is the most advanced and is currently in Phase 1 development in partnership with AbbVie. The companies began a licensing agreement in 2014 centered on this program. As noted on Apogenix’s website, AbbVie initiated a Phase 1 study of APG880 (ABBV-621)—one of Apogenix’s TRAIL receptor agonists—in March 2017 in patients with solid tumors, non-Hodgkin’s lymphoma or acute myeloid leukemia. 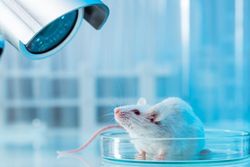