The machinery to edit RNA resides deep within our cells. And with a little help from strategically designed RNA guides, researchers can harness its power to develop therapeutics for everything from genetic diseases to pain to cancer. 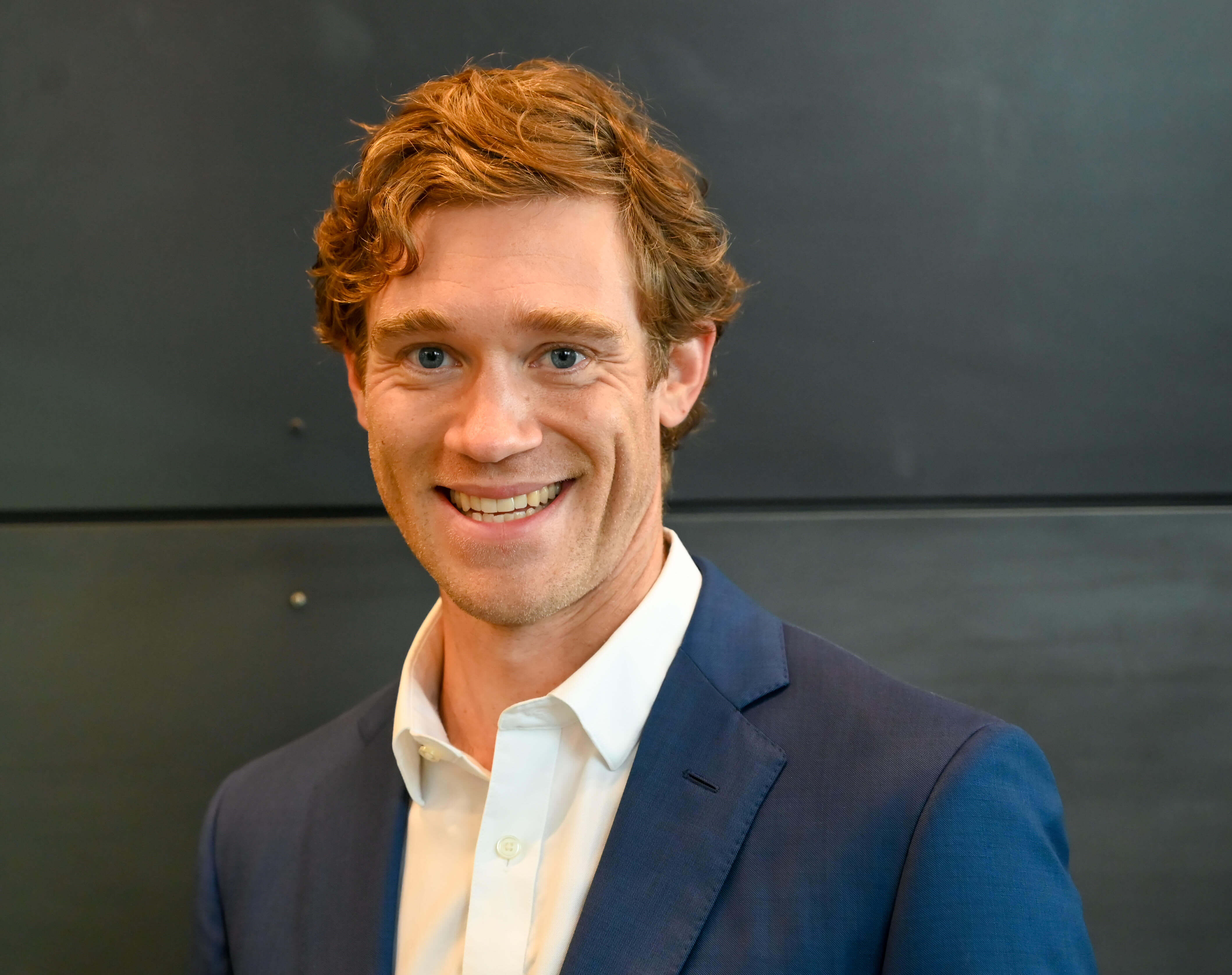 “It's an end-to-end technology suite,” said David Huss, Shape Therapeutic’s Vice President and Head of Research. “For us, a lot of it is taking that foundation of these platform technologies and really further advancing them in disease-specific applications.”

Unlike its more well-known cousin DNA editing, RNA editing doesn’t permanently alter the genome of a cell. With DNA editing, Huss said, “it's kind of a one and done. If you hit that DNA, you make your change, and then 100% of those RNAs are going to have that change.”

Instead, RNA editing works on mRNA by swapping one RNA base for another. To get a cell to edit a particular base, scientists provide a guide RNA molecule to tell the cell’s RNA editing enzymes where to edit. Usually, these guide RNA instructions are encoded as DNA on an adeno-associated viral (AAV) vector, which can enter human cells. The cell’s native transcription machinery then transcribes the guide RNA from the provided DNA sequence, allowing it to instruct the RNA editing process.

Once a ribosome translates the edited mRNA into protein, the mRNA molecule gets degraded. So, to make a more permanent change using RNA editing, the cell must transcribe the guide RNA instructions provided by the AAV again. That might seem like a downside if scientists wanted to permanently fix a disease-causing genetic mutation, but this additional step lends tunability to how much RNA editing occurs in a cell. And for certain diseases, that might actually be a good thing.

“Is it a feature, or is it a flaw?” Huss asked. “The way that I often think about it is, many of the applications you don't want to be all or nothing.”

One such situation, Huss explained, is the build-up of alpha synuclein in Parkinson’s disease. Removing all of the alpha-synuclein would prevent the normal propagation of a synapse, but getting rid of some alpha-synuclein may prevent its pathological accumulation and aggregation.

RNA editing also has an advantage over DNA editing techniques such as CRISPR because it doesn’t require a large, foreign bacterial protein to do the editing, which can lead to immunogenicity. Shape Therapeutics and other companies who develop RNA editing therapeutics leverage human cells’ endogenous editing tools: a family of enzymes called adenosine deaminases acting on RNA (ADARs).

ADARs turn adenosines (A) into inosines, which the cell’s RNA translation machinery interprets as a guanosine (G). Thus, scientists can use ADAR to correct G to A mutations. The challenge is in directing ADAR to the adenosine you want to edit. 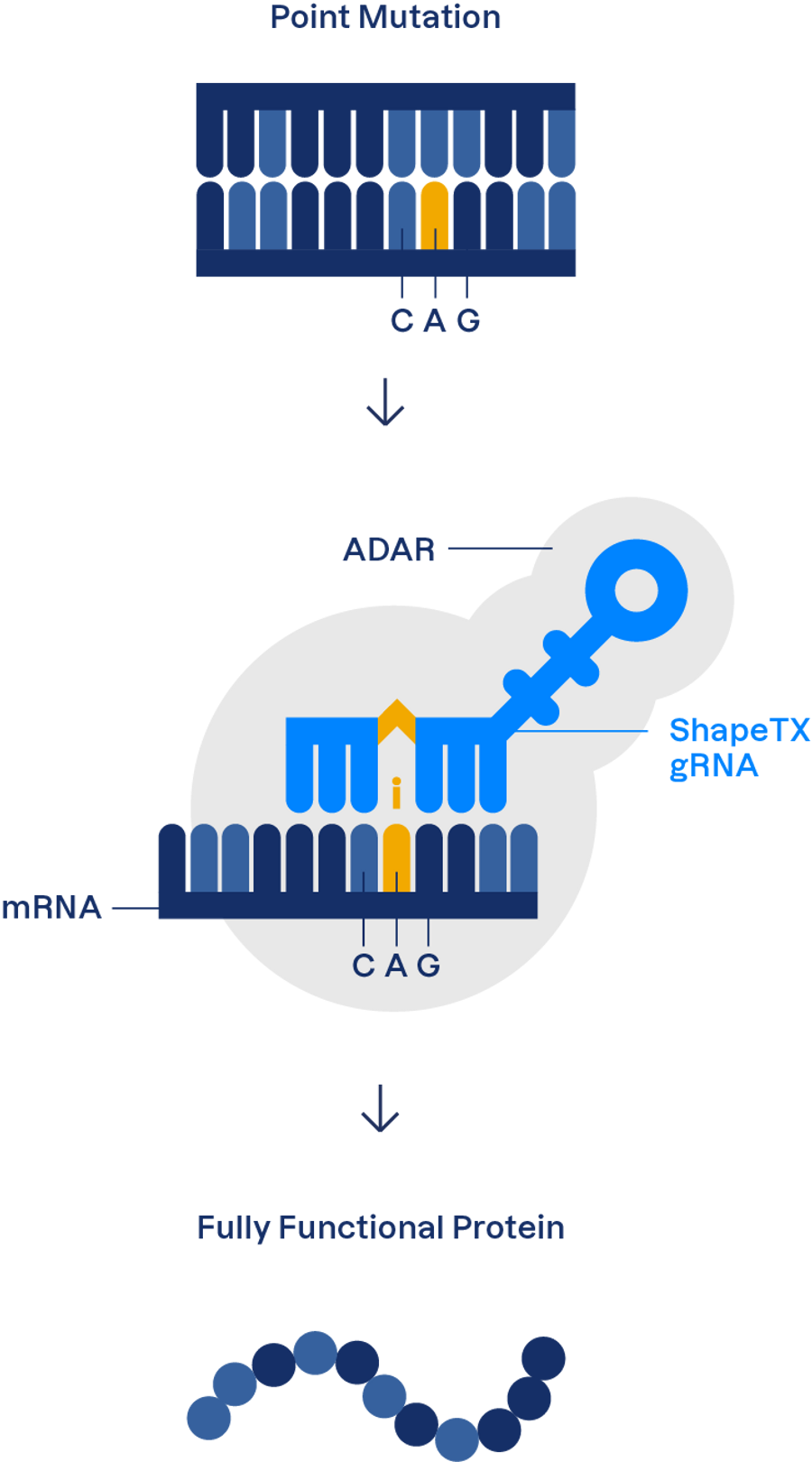 “ADARs themselves are relatively picky enzymes in that they won't edit everything equivalently,” said Joshua Rosenthal, a senior scientist at the Marine Biological Laboratory in Woods Hole and the co-founder of RNA editing company Korro Bio. “The neighboring residues around your target adenosine greatly influence its edit-ability.”

For example, ADAR disfavors editing an adenosine that has a guanine just upstream of it because the biophysics makes the interaction difficult. The team at Shape Therapeutics encountered this problem early in the life of the company as they attempted to design guide RNAs that would direct ADAR to adenosines implicated in disease.

“We were trying this basic design with kind of iterations here and there, and we weren't really seeing high efficiency on-target editing at many of the clinically relevant adenosines that we wanted to target,” said Huss.

The team realized that they needed to test guide RNAs on a much greater scale. Experiments in 24- or 96-well plates were not going to cut it. With the expertise of their team’s data scientists, they designed a high-throughput assay that allowed them to screen 500,000 unique guide RNA structures in a single reaction.

“That massively opened the door to possibilities that were out there because so many of those guide designs we would have never drawn up by hand,” said Huss. “Through this high-throughput screening assay, we were able to find guide RNAs that helped to correct that five prime G problem. And, in fact, now we're able to find guides that are very highly efficient, even in the context of a five prime G.”

Shape Therapeutics also developed high-throughput screening assays to improve AAV delivery of guide RNAs into cells. The challenge with AAVs is that when scientists administer them systemically, a lot of the AAVs end up in the liver. Administering too high of a dose of AAVs can also be toxic.

To rectify this, Shape Therapeutics scientists designed a platform called AAVid to screen through hundreds of millions to billions of unique AAVs, identifying potentially novel protein-protein interactions between proteins on the viral capsid and those on the surface of their human target cells.

“It really has opened the door to a lot of different tissue-specific AAVs that we can apply to our own internal programs but also make more widely available to others in the field,” Huss said.

Taking advantage of the fact that the ADAR2 protein is expressed in cells throughout the central nervous system, Shape Therapeutics focuses on neurological disease applications for their RNA editing technology. While still in the preclinical stages of research and development, they see very high efficiencies with their guide RNAs in vitro and are also evaluating them in animal models.

“I definitely don't see [RNA editing] as going to be a place where only one company or two companies can survive,” Rosenthal said. “If you look at all the things, even from genetic diseases, that can be corrected by going from A to G, or all the proteins that can be engineered in different ways by this, it's a tremendous space.”

With the power to cure diseases tucked neatly away in our cells, all we need are some RNA guides to lead the way.