To keep rogue tumor cells in check, sometimes the best defense is the body’s own immune system. Engineering safe and effective immunotherapies that work for many people with diverse tumors can be challenging. Rubius Therapeutics is trying to make immunotherapies better by calling on a surprising blood cell: red blood cells (RBCs).

RBCs are not traditional immune cells like better-known T cells or macrophages; they don’t attack foreign invaders, and their ability to prompt other cells’ killing abilities is just starting to be harnessed. In a study recently published in Nature Communications, a team from Rubius Therapeutics reported that they had engineered RBCs to present tumor antigens that signal T cells to attack the tumor. In mouse models, they use these artificial antigen-presenting cells (aAPCs) to target HPV-driven cancers, which have traditionally been a target for checkpoint-blockade immunotherapies.

“The ability to block inhibitory pathways has been of great benefit to patients,” said Larry Turka, chief scientific officer of Rubius Therapeutics. “But clearly, it hasn't been a panacea for everybody. Not everyone has benefited from it, and sometimes benefits are relatively short term.”

Rubius Therapeutics focuses on a different part of the immune response: the cells that put T cells on the tumor’s scent. APCs such as macrophages or dendritic cells have surface molecules called human leukocyte antigens (HLA) that hold a foreign antigen. Some cells such as T and B cells take note of the foreign antigens the APCs present, and use them to recognize and attack invaders throughout the body.

In cancer, APCs don’t always do a good job of training T cells to recognize tumors. “What we think is that natural APCs are sleeping on the job,” said Marcela Maus, an immuno-oncologist at Harvard Medical School and Mass General Cancer Center who was not involved in this study. “Maybe they’re patrolling and presenting things, but it doesn’t look foreign enough to really wake up an immune response, or they’re not presenting enough of it, or in the wrong context.”

Rubius Therapeutics decided to engineer a better APC to present a tumor antigen. They use precursors of RBCs as the base and insert genes using a viral vector to express thousands of copies of HLA. HLA holds the tumor antigen flanked by two other molecules called 4-1BBL and IL-12, which prod T cells to replicate and attack. Because of RBCs’ unique developmental path, the precursors lose their nuclei before becoming RBCs; the genes are ejected from the cell, but the surface proteins remain.

While this isn’t the first attempt to make aAPCs for cancer, Maus said the use of viral vector-based genetic engineering, and the fact that it doesn’t require complex technologies like CRISPR make it novel.

“This crosses a lot of boundaries,” Maus said.

Unlike other cellular immunotherapies that require custom-engineered cells designed for a specific patient’s tumor, Rubius Therapeutics is developing a single off-the-shelf product that can be prescribed to any eligible patient. Turka imagines manufacturing a product that can be frozen, then thawed and shipped for administration through pharmacies. Nabil Saba, an immuno-oncologist at Emory University’s Winship Cancer Institute, said that this kind of simplicity might make the technology stand out from complicated T cell engineering efforts. 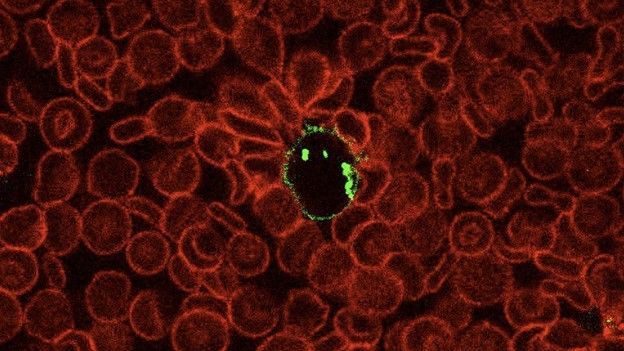 In their new study, the researchers engineered aAPCs from mouse RBCs to target a protein that they artificially expressed in mouse tumors. These aAPCs stimulated replication of T cells that recognized the antigen and produced defense molecules to inhibit tumor growth. The engineered cells even promoted the activation of T cells that recognized other tumor antigens not presented by the aAPC, a phenomenon called epitope spreading that Turka finds an encouraging sign.

Rubius Therapeutics’ aAPCs remind both Maus and Saba of vaccines because of the way they stimulate the immune system to recognize and respond to specific targets. Maus thinks that there’s potential to use this type of technology with a broader range of cancer molecules, and the team at Rubius Therapeutics is already at work designing an aAPC with a more customizable HLA molecule that can be loaded with any target molecule. They’re also planning a study with red blood cells that don't have any HLA at all, just the co-stimulatory 4-1BBL and IL-12, which seem to have some anti-tumor effects on their own.

“For most cancers, we don't know the antigens, so there's a lot of needy patients for whom we don't know what antigen to put on,” Turka said.

One advantage of red blood cells is that they have fewer markers that might seem foreign to a recipient’s immune system. Turka estimates that 95% of people can receive a red blood cell transfusion without rejecting it. Red blood cells also stay in the blood vessels and spleen, making it less likely that they’ll wreak havoc throughout the body.

“To be able to show that not only do we have an effective therapy, but it's actually safe in vivo was very promising for us as we try to move this forward,” said Tiffany Chen, a scientific director at Rubius Therapeutics and senior author of the study.

But that doesn’t mean that the therapy will work in everyone; the current formulation uses one common version of HLA out of the tens of versions that different people have. Patients would only be able to use this therapy if their HLA molecule matches the version on the red blood cells.

Clinical trials will be the real test of safety and efficacy. Rubius Therapeutics has started enrolling participants for a Phase 1 clinical trial. They also have an RBC-based therapeutic targeted for lung cancer that’s further along in clinical trials, and preliminary data show that the drug is safely tolerated. In another trial, they are testing how the lung cancer drug works in combination with checkpoint blockade as a way to ramp up the T cell response.

“We're still scratching the surface of the immune environment and how to use the immune system to target HPV-related cancer,” Saba said. “We certainly live in a very exciting time in terms of immunotherapy.”