Mix a dash of sunlight and a bucket of water with a breath of carbon dioxide, and you’ve got just the fuel to power the world’s newest biological factory: little blue-green bacteria called spirulina.

By engineering the cyanobacteria, Arthrospira platensis (spirulina) to express antibodies against some of the world’s most difficult to treat diseases, scientists at the biotech company Lumen Bioscience not only add spirulina to the ranks of traditional cellular factories like yeast and E. coli, but they also leverage spirulina’s unique biology to produce large-scale quantities of safe biologics for diseases like traveler’s diarrhea and potentially COVID-19.

Cyanobacteria, the phylum that includes spirulina, are unique among bacteria in that they get their energy from photosynthesis. “They are admittedly the most prolific microorganisms on the planet simply because they figured out a long time ago how to use light and CO2 to grow,” said Himadri Pakrasi, a biochemist and cyanobacteria researcher at Washington University in St. Louis, who is not associated with Lumen Bioscience. 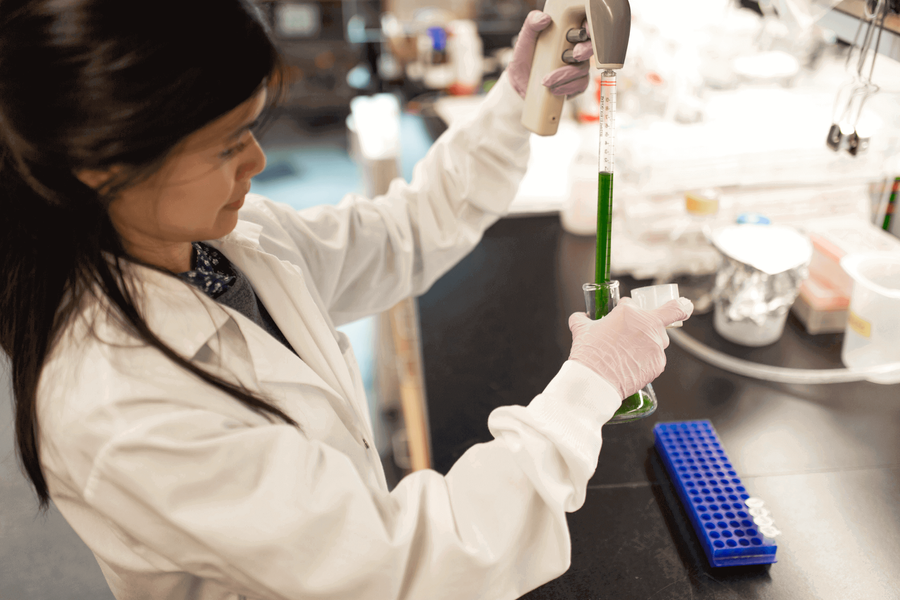 In addition to being easy to grow, spirulina is safe to eat and is an exceptional source of protein; spirulina is approximately 50 to 70 percent protein by mass.

While most consider spirulina’s protein-richness to be an important nutritional feature, the team at Lumen Bioscience realized that it meant that spirulina is really good at making protein.

“Oftentimes, when you try to force the cell to make a lot of an exogenous protein, you are sucking resources from other essential metabolic pathways so that you get a rather severe growth deficit,” said Lumen Bioscience co-founder and Chief Scientific Officer, Jim Roberts. “That's not true in spirulina because that's the way their metabolism is organized.”

At first, however, it was difficult to make spirulina amenable to genetic modification. “It just kind of sat there as an unsolved problem,” said Roberts.

But at Roberts’ former company, Matrix Bioscience, scientists worked out how to genetically engineer spirulina to take up and express foreign DNA, which the researchers reported in a preprint on bioRxiv that they have submitted for publication (1). With those optimized methods, the team at Lumen Bioscience realized that they could take advantage of spirulina’s abundant protein production to express large amounts of therapeutic proteins.

“That’s just bonkers,” added Brian Finrow, the co-founder and CEO of Lumen Bioscience. “That's two  —  almost three  — orders of magnitude higher than anybody's ever reported for a food-based expression system like this.”

Because spirulina is safe to eat, the team doesn’t need to purify the therapeutic proteins produced by the spirulina cells. They simply grow up the spirulina in large vats and dry it out to make a powder.

“All of the processes that are very expensive in the manufacture of traditional biologics don't happen. The cost of making our drug is simply the cost of growing spirulina,” said Roberts.

The low production cost paired with the ability to grow large quantities of spirulina attracted notice from the Bill & Melinda Gates Foundation, which sought to treat childhood diarrheal disease and traveler’s diarrhea, caused by consuming water or food contaminated by E. coli or Campylobacter jejuni. Diarrheal disease kills hundreds of thousands of infants and newborns in the developing world. Researchers associated with the Gates Foundation realized that they could treat diarrheal diseases by administering neutralizing antibodies against the bacteria.

“The key linchpin was that even though this works in trials, nobody can ever manufacturer enough of it,” said Finrow. “You have to keep re-dosing every day, so the traditional ways of doing this with sterile fermentation, it's just obviously a non-starter.” That kind of production pipeline would not be able to produce enough of the therapeutic for all of the children around the world who need it.

With spirulina’s efficient protein production, the team at Lumen Bioscience have already completed a phase one clinical trial testing their traveler’s diarrhea antibody cocktail and found no adverse effects in healthy people, even at doses as high as 9000 mg per day.

When Finrow asked the clinical trial coordinators how the people in the trial felt about taking such a high dose of spirulina, he was surprised by their response. 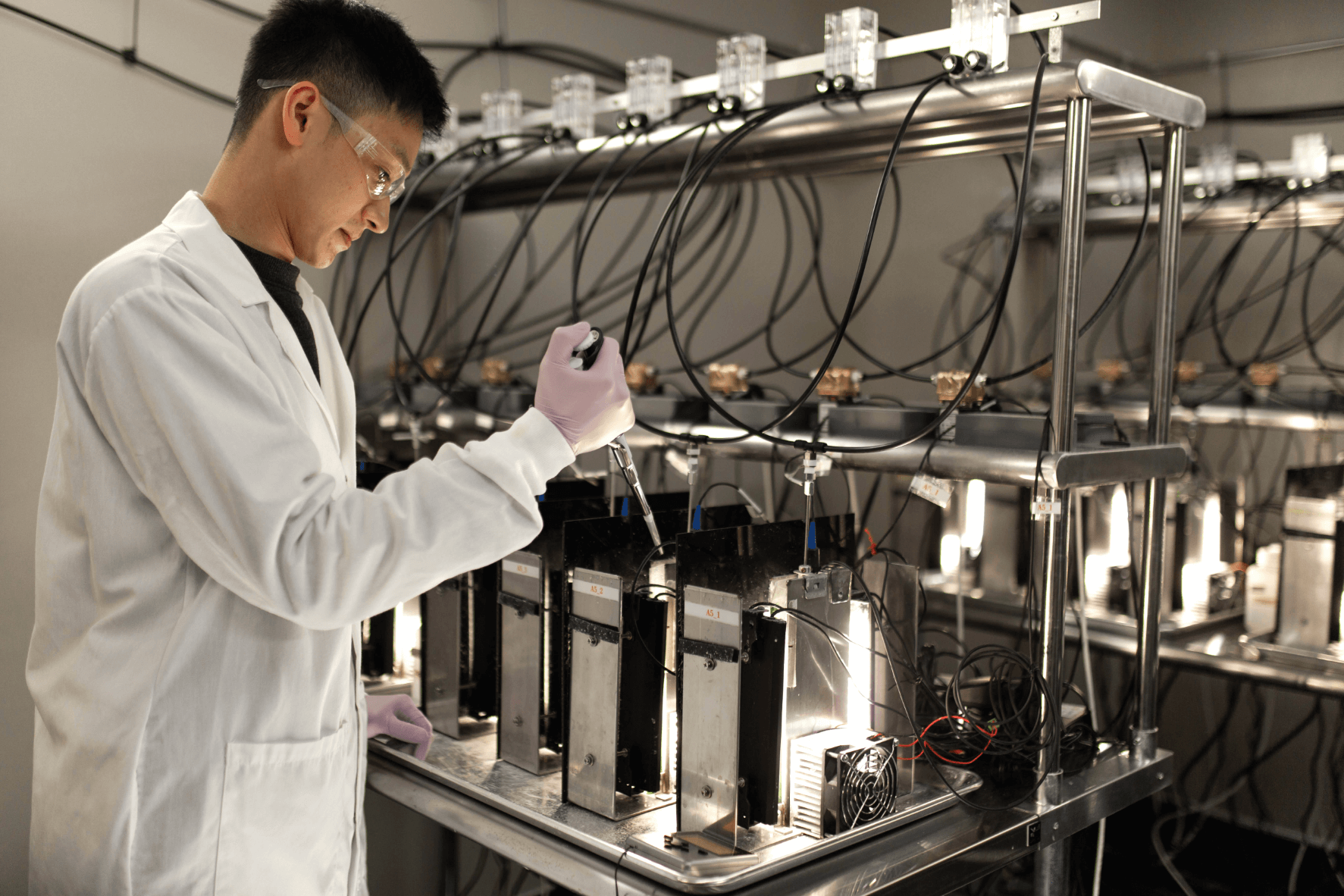 “People went out of their way to request to be specially notified to volunteer again in the future if they ever do any more spirulina clinical trials in this trial unit,” he said. “Usually, people don't like to choke down a pill, or they don't want to go get the IV or the injections, so that was a really important learning in that first trial. People really like eating spirulina.”

The team at Lumen Bioscience is now gearing up for a phase two clinical trial to test the efficacy of their spirulina-produced biologic for traveler’s diarrhea. They are also developing an antibody cocktail to treat the gastrointestinal symptoms of COVID-19, and have partnered with Google to use machine learning to optimize their spirulina production capacity (2).

By enhancing their production, the team hopes to decrease the cost of their traveler’s diarrhea biologic so that they can provide the twice daily dose needed by populations in the developing world for just $10 per 90-day supply.

“We're not quite there yet, but we do have a roadmap to get there,” said Finrow. “We're very pleased to be working with the Gates Foundation and Google… to take that decades long improvement process and shrink it down so we can get something out there to help these kids.”