GOTHENBURG, Sweden—Could one tiny photonic device be able to find new planets via astronomy and detect diseases here on Earth? Researchers from Chalmers University of Technology believe they have created a microcomb that can, in fact, do both—and a lot more.

In a recent article in Nature Photonics, the researchers described a new type of microcomb on a chip, with two microresonators. The new microcomb is a coherent, tunable, and reproducible device with up to ten times higher net conversion efficiency than the current state of the art.

“The reason why the results are important is that they represent a unique combination of characteristics in terms of efficiency, low-power operation, and control that are unprecedented in the field,” noted Óskar Bjarki Helgason, a Ph.D. student in the Department of Microtechnology and Nanoscience at Chalmers and first author of the article. 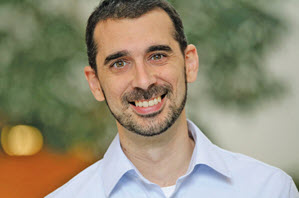 According to Victor Torres Company, an associate professor of microtechnology and nanoscience in the Photonics Laboratory at Chalmers, “Most lasers emit electromagnetic radiation in a single frequency or color, but there are certain lasers that emit multiple colors simultaneously. A frequency comb is a special laser where the emission frequencies are evenly spaced. It is literally a ruler of light, where the ‘markers’ set the frequency scale across a portion of the electromagnetic spectrum, from the ultraviolet to the mid-infrared. The location of the markers can be linked to a known reference.”

“The core technology in a standard frequency comb is a so-called mode-locked laser—that is, a laser that generates a train of repetitive light pulses over time. Mode-locked laser technology is very well established, but it has practical limits in the maximum rate—the number of pulses that can be flashed per unit of time,” mentioned Torres Company, who leads the research project at Chalmers. “Coming back to the ruler picture, this means that the teeth of the comb are very densely spaced, which is a restriction for some applications.”

“A microcomb is a much more modern technology ... that can generate repetitive pulses of light at astonishing rates,” Torres Company explained. “They are generated by sending laser light to a tiny optical cavity called a microresonator.”

A microcomb can be used to measure or generate frequencies with extreme precision.

“With microcombs it is possible to synthesize the optical frequency with a relative uncertainty of one part in 1015, meaning that the colors are known with 15 significant digits,” reported Torres Company.

The Chalmers researchers are not the first to demonstrate a microcomb on a chip, but they have developed a method that overcomes several limitations in the field.

“Until now, one fundamental drawback with microcombs is their poor conversion efficiency in generating new photons. Typically, only a tiny fraction (around one percent or so) of the laser pump power is actually used for generating the comb spectrum. This negates some of the advantages of microcombs. We have reported an alternative microcomb source with a conversion efficiency of around 50 percent, which only requires being pumped with a laser of a few milliwatts,” said Torres Company. “The key is using two microresonators instead of one. The microresonators interact with each other, similar to how atoms bind together when forming a diatomic molecule. This arrangement is known a photonic molecule, and has physical characteristics that are unique.”

Microcombs have two important attributes that make them extremely attractive for practical purposes: the frequency spacing between markers is very large (typically between 10 and 1,000 GHz)—much higher than the spacing in mode-locked laser frequency combs. They can also be implemented with photonic integration technology.

The compatibility with photonic integration brings benefits in terms of reduction of size, power consumption, and the potential to reach mass-market applications. The large frequency spacing means that microcombs could be used for novel applications like light sources for fiber-optic communication systems or for the synthesis of pure microwave electromagnetic radiation.

The microcombs could also potentially be used in LIDAR systems in autonomous driving vehicles or to calibrate the spectrographs used in astronomical observatories devoted to the discovery of Earth-like exoplanets. And by analyzing the composition of exhaled air, microcombs have the potential to diagnose diseases at earlier stages.

“Microcombs can be used for absorption spectroscopy. One could, for example, use the comb light to probe the exhaled air from a patient and detect traces of certain compounds—heralding the presence of a certain disease. The comb colors could be designed to monitor certain biomarkers, with well identified absorption lines in order to increase the specificity,” Torres Company added. “This is a technique that is well established with frequency combs.”

“For the technology to be practical and find its use outside the lab, we need to co-integrate additional elements with the microresonators such as lasers, modulators, and control electronics. This is a huge challenge that requires maybe five to 10 years and an investment in engineering research,” concluded Torres Company. “But I am convinced that it will happen.

“The most interesting advances and applications are the ones that we have not even conceived of yet. This will likely be enabled by the possibility of having multiple microcombs on the same chip. What could we achieve with tens of microcombs that we cannot do with one?”

Real-world data to the rescue

Real-world data to the rescue