E. coli may hold the key to manufacturing hard-to-make drugs

Sean McClain, founder and CEO of Absci, became an entrepreneur when he was ten because his dad refused to buy him a video game.

His dad suggested that he cut his neighbor’s grass to earn the money. McClain was a really introverted kid, so anxiety washed over him as he approached his neighbor’s front door to offer to cut their lawn. They thought he was “adorable” and paid him ten dollars a week to cut their lawn. He didn’t end up buying the video game at the end of the summer. Instead, he put the money back into his lawn mowing start-up to expand his business.

“The thing I loved about it was that it pushed me out of my comfort zone. Growing it and being able to create something from nothing really ignited that entrepreneurial fire,” said McClain.

Absci uses Escherichia coli to produce hard-to-make proteins and antibodies that biotech behemoths like Moderna can’t produce using their mammalian cell lines. He wants to combine his E. coli library with artificial intelligence (AI) to create a “Google” for drug development. He envisions researchers using his database to simply look up a particular drug target, find the most effective drug candidate, and learn how to best produce it using E. coli.

What inspired you to use E. coli for drug synthesis?

I thought that I wanted to be a mechanical engineer and design cars. I went to school at the University of Arizona to study mechanical engineering, but when I took a chemistry class my freshman year, I fell in love with chemistry and became interested in how to design new drug candidates. I worked in a lab where I purified proteins from E. coli to test how mutated forms of the protein could cause cataracts. I became obsessed with engineering living organisms for protein synthesis, so I really dove into the history of protein synthesis in biotech.

Genentech’s first product was insulin, which they produced in E. coli. As the industry shifted towards more complex proteins like monoclonal antibodies, Genentech was unable to produce them in E. coli, so they shifted to mammalian cells. I knew that if I could engineer E. coli to produce these complex human proteins, I could dramatically decrease their cost and development time. I came up with this crazy idea for how to engineer E. coli, and I thought it had some legs to it, so I ran with it. 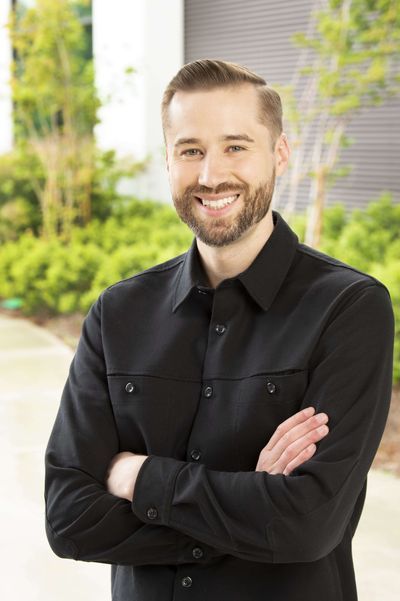 Sean McClain is the founder and CEO of Absci, a biotech company using E. coli and artificial intelligence to streamline drug discovery and manufacturing.
credit: mcclain

How did your idea grow into a biotech company?

I decided to graduate a year early from the University of Arizona and (bless her heart) my fiancé at the time agreed to move in with my parents in Portland, OR. I found a 200-square-foot space that was basically a broom closet converted into a very low-tech lab with a tiny window overlooking a basement parking lot. I spent 18 months engineering our hallmark E. coli strain to prove that we could produce a monoclonal antibody. I showed for the first time that it was possible, and that led to our first large pharma partnership. The rest is history.

How did you engineer E. coli to produce monoclonal antibodies?

There are several key differences between E. coli and mammalian cells. The transcription and translation rates are slower in mammalian cells.  Additionally, the cytoplasm of E. coli is reduced, so it can’t form disulfide bonds, a critical part of antibody stability. We developed E. coli cells with transcription and translation rates that could be easily finetuned to find the perfect rate of production for a particular protein. Additionally, we engineered the cytoplasm to be “semi-oxidative,” meaning that it's oxidized enough to allow formation of disulfide bonds, but still reduced enough to grow to high cell density for commercial manufacturing.

At first, we couldn’t hit the quality metrics our pharma partners wanted, so we started integrating what we call folding and expression solutions. This includes components important for making new proteins such as chaperones, which help fold proteins. When we paired the right folding and expression solution with a given protein, we met or exceeded the titer and quality metrics we needed.

How did the folding and expression solutions improve drug synthesis?

We spent a good two years developing “breakthrough assays” and built billion member libraries with various folding and expression solutions. In a single screen using these libraries, we could fish out the best solution for a given protein. This was a huge game changer. In a single experiment, we could get the best cell line to maximize the titer and quality of a protein. One of the dirty secrets of pharma is that a lot of exciting drug candidates get shelved because they can’t produce them at a higher titer and quality. We ensure that whatever we discover, we can manufacture as well. With the combination of our original engineered E. coli strain and our “breakthrough assays,” we turned E. coli into a biomanufacturing workhorsefor any given protein out there.

What are you most excited about moving forward?

We feed all the data from our assays into deep learning models. When we have a new protein to work on, we can predict which sequence and cell line will produce the highest quality and titer. As we feed the model more data, we continuously increase the titer and quality of our products and decrease our timeline. We also discovered that our assays provide information about drug functionality characteristics, including target affinity. Now, we feed the drug functionality data into our deep learning model as well. We hope to use this program to take a target sequence, search it against our model, and predict the absolute best drug candidate and associated cell line for a given drug target, so it’s a fully integrated end-to-end solution.

Eventually, we want to be fully in silico where we don’t have to conduct a screen, but simply design an effective, scalable drug candidate with the click of a button. We are becoming the Google of synthetic biology. Our data will allow us to totally transform the industry. What I initially developed was just the seed of what Absci blossomed into.

How did your team take your engineered E. coli strain to the next level?

Our mantra is “believe in the impossible.” My job is to inspire people to think big and unlock their own potential. We often don’t think we’re capable of solving big, audacious problems. I try to show people that they are capable and get them into the mindset of believing in the impossible. Truly amazing things happen when you give someone the space to fail and learn from their failures. It creates a culture of innovation. That really pushes us to be one of the most cutting-edge companies within synthetic biology and artificial intelligence. What wakes me up every morning, even on a bad day, is knowing that we are solving problems that are going to change the world.