The legal contretemps over who owns CRISPR technology has gotten more complicated lately. CRISPR is an acronym for clustered regularly interspaced short palindromic repeats. It is a technology derived from a bacterial immunity system for altering chromosomal sequences in situ in a cell in combination with a bacterially derived protein called Cas9, that is expected to have a game-changing effect on next-generation genetic engineering efforts in a wide variety of fields (hailed as the “Breakthrough of the Year” for 2015).
CRISPR provides a mechanism for inserting or deleting specific DNA sequences using CRISPR-associated targeting RNAs and the Cas9 RNA-guided DNA endonuclease enzyme. It provides for the first time the type of specificity for altering DNA that the polymerase chain reaction (PCR) provided a generation ago for amplifying specific DNA.
Heretofore there were two groups of researchers vying for ownership of aspects of this technology directed to eukaryotic cells: inventors from the University of California, Berkeley (Jennifer Doudna) and the University of Vienna (Emmanuel Charpentier), and inventors from The Broad Institute/MIT and Harvard University (Zhang and colleagues).  An interference before the U.S. Patent and Trademark Office (USPTO) awarded rights to eukaryotic CRISPR to The Broad two years ago, a decision affirmed on appeal and based on a determination that Berkeley had not shown that it was in possession of eukaryotic embodiments when it first filed its patent applications.
Last month, the Berkeley/ Vienna/ Charpentier (CVC) group was successful in having another interference declared, between substantially all of the Broad’s CRISPR patent estate as well as pending applications, against CVC’s applications expressly claiming eukaryotic-directed CRISPR. This interference is in its initial stages, but both parties have asked the Patent Trial and Appeal Board to permit them to file motions that could influence the course of the interference when (and perhaps even if) the parties reach the priority phase.  Indeed, while unlikely there is a remote possibility that the interference may proceed to a determination that neither party is entitled to a patent or patents on eukaryotic CRISPR.
Meanwhile, Sigma-Aldrich has petitioned the USPTO Director, Andrei Iancu, and the Chief Judge of the PTAB to declare an interference with Berkeley. The petition was necessitated by the Examiner’s refusal to find Sigma’s claims allowable over the earliest of Berkeley’s priority applications. Sigma’s petition provides a helpful graphic illustrating the priority positions of the parties (and the Broad): 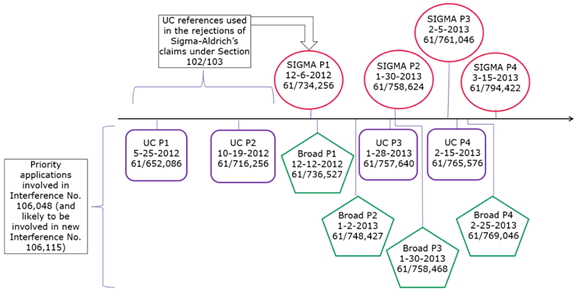 The petition is extraordinary because Sigma's claims are not in condition for allowance, which is a prerequisite for the Office declaring an interference. The Examiner (who is the same Examiner responsible for allowing Berkeley's patents), according to the petition, has provided no legal justification for refusing to acknowledge what Sigma contends is the precedential value of the decisions in the earlier interference.  According to the petition, the Examiner merely responds that their evidence is "unpersuasive" in refusing to recognize the allowability of their pending claims. Sigma's position is that if the Doudna et al. provisional applications did not provide sufficient support to find the Broad's claims obvious (in an interference context) they cannot support a determination of obviousness in ex parte patent prosecution involving Sigma's applications.  Sigma further alleges that the evidence adduced in its ex parte examination of the three identified pending applications is "even more extensive" than the record in the earlier Berkeley/Broad interference; here, Sigma asserts that it has provided "multiple declarations from prominent experts explaining in even greater detail why (a) UC's disclosure of CRISPR-Cas9 in a prokaryotic environment does not render obvious Sigma-Aldrich's CRISPR-Cas9 eukaryotic claims, and (b) UC's provisional applications (UC P1 and UC P2) do not enable or adequately describe use of CRISPR-Cas9 in eukaryotic cells."
There is no time frame for the petition to be considered much less granted, and the USPTO has yet to act on this request.  As Sigma notes in its petition, it would be "grossly inefficient" for the USPTO to conduct the current interference between Berkeley and the Broad and then have to conduct a further interference between Sigma and either or both of the other parties. If the USPTO grants the petition, one option would be to join Sigma in the current interference (by re-declaring the interference to name all three parties). If the USPTO wishes to avail itself of this option then the current interference cannot be allowed to proceed. At present, the PTAB shows no effort along those lines. If the Office does not grant the petition, or further delays, Sigma’s applications may be held in abeyance until the current Berkeley-Broad interference has concluded.
Regardless of these strategic moves and countermoves, it is clear that a determination of who owns CRISPR technology as it is applied to eukaryotic cells (which includes many of the most promising applications to agriculture and human health) is far from being resolved. This persistent uncertainty risks inhibiting indefinitely development of this important technology.
---------------------------------------------------------------------------
Kevin Noonan is a partner with the law firm McDonnell Boehnen Hulbert & Berghoff LLP and represents biotechnology and pharmaceutical companies on a myriad of issues. A former molecular biologist, he is also the founding author of the Patent Docs weblog, http://patentdocs.typepad.com/.
Sep 10, 2018

Special Report on Stem Cells: The next generations

Special Report on Stem Cells: The next generations