VANCOUVER, BC—Algernon Pharmaceuticals Inc. has announced the filing of a pre-Investigational New Drug (IND) meeting request with the FDA for the company’s investigation of AP-188 (N,N-Dimethyltryptamine, also known as DMT) for the treatment of stroke-related dysfunction. DMT is a known psychedelic compound that is part of the tryptamine family,

CIMT is a form of physical therapy involving intensive training of a weaker limb, while restricting the use of a stronger limb. CIMT has demonstrated the ability to enhance recovery in the treatment of patients post-stroke. Algernon plans to evaluate whether adding DMT treatment to CIMT results in increased neuroplasticity, thereby enhancing the effects of physical therapy.

Algernon’s decision to investigate DMT and move it into human trials for stroke is based on multiple preclinical studies demonstrating that DMT helps promote neurogenesis, as well as structural and functional neural plasticity. These are key factors involved in the brain’s ability to form and reorganize synaptic connections, which are needed for healing following a brain injury.

One recently published preclinical study in an animal model for stroke has shown that rats treated with DMT recovered motor function quicker, and to a greater extent. The DMT-treated rats also exhibited lower lesion volumes when compared to control group animals that did not receive DMT.

Algernon has filed provisional patents for new forms of DMT, in addition to formulation, dosage, and method of use claims for ischemic stroke. The company has also filed claims for combination therapy of DMT and CIMT.

Algernon has awarded a contract to Dalton Pharma Services for the manufacture of the active pharmaceutical ingredient and finished product for the company’s formulation of DMT. The company also recently retained Charles River Laboratories to conduct its preclinical studies of DMT for the company’s stroke clinical research program, and has appointed Hammersmith Medicines Research Ltd. to conduct its DMT Phase 1 study. 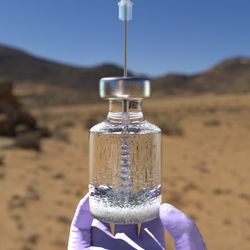