CAMBRIDGE, Mass.—The human body produces many antimicrobial peptides that help the immune system fend off infection. Scientists hoping to harness these peptides as potential antibiotics say they have now discovered that other peptides in the human body can also have potent antimicrobial effects, expanding the pool of new antibiotic candidates.
In the new study, researchers from the Massachusetts Institute of Technology (MIT) and the University of Naples Federico II found that fragments of the protein pepsinogen, an enzyme used to digest food in the stomach, can kill bacteria such as Salmonella and E. coli.
The researchers believe that by modifying these peptides to enhance their antimicrobial activity, they may be able to develop synthetic peptides that could be used as antibiotics against drug-resistant bacteria.
“These peptides really constitute a great template for engineering. The idea now is to use synthetic biology to modify them further and make them more potent,” says Cesar de la Fuente-Nunez, an MIT postdoc and Areces Foundation Fellow, and one of the senior authors of the paper.
Other MIT authors of the paper, which appears in the Jan. 20 issue of the journal ACS Synthetic Biology, are Timothy Lu, an associate professor of electrical engineering and computer science and of biological engineering, and Marcelo Der Torossian Torres, a former visiting student.
Antimicrobial peptides, which are found in nearly all living organisms, can kill many microbes, but they are typically not powerful enough to act as antibiotic drugs on their own. Many scientists, including de la Fuente-Nunez and Lu, have been exploring ways to create more potent versions of these peptides, in hopes of finding new weapons to combat the growing problem posed by antibiotic-resistant bacteria.
In this study, the researchers wanted to explore whether other proteins found in the human body, outside of the previously known antimicrobial peptides, might also be able to kill bacteria. To that end, they developed a search algorithm that analyzes databases of human protein sequences in search of similarities to known antimicrobial peptides.
“It’s a data-mining approach to very easily find peptides that were previously unexplored,” de la Fuente-Nunez says. “We have patterns that we know are associated with classical antimicrobial peptides, and the search engine goes through the database and finds patterns that look similar to what we know makes up a peptide that kills bacteria.”
In a screen of nearly 2,000 human proteins, the algorithm identified about 800 with possible antimicrobial activity. In the recent paper, the research team focused on the peptide pepsinogen, whose role is to break down proteins in food. After pepsinogen is secreted by cells that line the stomach, hydrochloric acid in the stomach mixes with pepsinogen, converting it into pepsin A, which digests proteins, and into several other small fragments.
Those fragments, which previously had no known functions, showed up as candidates in the antimicrobial screen.
Once the researchers identified those candidates, they tested them against bacteria grown in lab dishes and found that they could kill a variety of microbes, including foodborne pathogens, such as Salmonella and E. coli, as well as others, including Pseudomonas aeruginosa, which often infects the lungs of cystic fibrosis patients. This effect was seen at both acidic pH, similar to that of the stomach, and neutral pH.
“The human stomach is attacked by many pathogenic bacteria, so it makes sense that we would have a host defense mechanism to defend ourselves from such attacks,” de la Fuente-Nunez says.
The researchers also tested the three pepsinogen fragments against a Pseudomonas aeruginosa skin infection in mice, and found that the peptides significantly reduced the infections. The exact mechanism by which the peptides kill bacteria is unknown, but the researchers’ hypothesis is that their positive charges allow the peptides to bind to the negatively charged bacterial membranes and poke holes in them, a mechanism similar to that of other antimicrobial peptides.
The researchers now hope to modify these peptides to make them more effective, so that they could be potentially used as antibiotics. They are also seeking new peptides from organisms other than humans, and they plan to further investigate some of the other human peptides identified by the algorithm.
“We have an atlas of all these molecules, and the next step is to demonstrate whether each of them actually has antimicrobial properties and whether each of them could be developed as a new antimicrobial,” de la Fuente-Nunez says.
(Article adapted from an MIT News Office story) 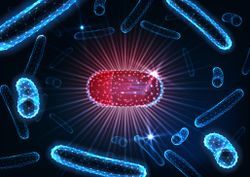