Exercise may improve cellular power plants gone haywire to ward off Parkinson’s disease. But researchers are still trying to understand how.

While researchers search for a cure for Parkinson’s disease in the lab, patients are taking on the disease in a different setting: the gym.

Studies have shown that exercise has tangible benefits for people with Parkinson’s disease, a disorder where nerve degeneration erodes movement. In one report from the Parkinson’s Foundation’s Parkinson’s Outcomes Project, people who exercised at least 2.5 hours per week had slower disease progression. The earlier they started, the better the outcomes (1).

“The exercise connection is pretty clear,” said James Surmeier, a neuroscientist who studies Parkinson’s disease at Northwestern’s Feinberg School of Medicine. “But I think exactly why that is is not as clear.”

Now, some researchers are trying to understand how the benefit of lifestyle interventions connects to the cellular mishaps that characterize Parkinson’s disease.

Parkinson’s disease is marked by the death of neurons that make dopamine. But even before the cells die, there’s evidence that things are going haywire inside them.

Decades of research have implicated mitochondria, the tiny power plants within cells. Normally, mitochondria break down fuel sources to generate energy for the cell’s myriad tasks, such as sending signals to other cells or dividing. But like the coal-burning power plants that we know, mitochondria also spew pollutants into the environment. These toxic molecules are called reactive oxygen species, or ROS, and when they accumulate at high levels in the cell, they can cause damage and disrupt its normal functions.

Neurons do energy-intensive work, which makes them dependent on functional mitochondria, which are labeled green here in mouse dopaminergic neurons.
Credit: Enrico Zampese

This is where things may go wrong in Parkinson’s disease. Mitochondria can’t keep cranking out energy indefinitely. With time, they become less effective at producing the energy that the cell needs. Old mitochondria become a liability to the cell, so they are degraded through a process called mitophagy and replaced with new mitochondria. Studies have shown that in Parkinson’s disease, both of these processes are hampered, leading to the accumulation of old, toxic mitochondria that continue battering the cell with ROS without generating much-needed energy.

Some cells might be particularly sensitive to faulty mitochondria. Surmeier is especially interested in the role of mitochondria in large dopamine-producing neurons, which are most often affected by Parkinson’s disease. These cells have long spindly arms that constantly send signals in millions of locations throughout the brain, which is no small task. “This creates a huge mitochondrial burden on the cells,” Surmeier said. “They have to work 24 hours a day, seven days a week. They never shut down.”

Running a marathon or chasing after a bus both require sustained energy, which means that it’s time for mitochondria to power up.

Scientists like David Hood at York University have studied how exercise affects mitochondria in muscle. They may not be neurons, but the two cell types have some unexpected similarities: they both use calcium signaling to respond to their environments, and they can modulate their metabolic needs. Exercise can be a workout for the brain too; it increases blood flow to the brain, and these effects can last, as a randomized controlled trial in individuals with mild cognitive impairment showed (3).

In people with Parkinson’s disease, studies have shown that regular exercise (3 days per week of high-intensity workouts for 16-weeks) improves muscle function and markers of mitochondrial function (4). Hood and others had studied how exercise helps muscle cells adapt to increased energy demands by making more mitochondria.

He wondered, however, whether exercise also affects these cells’ ability to clear away exhausted mitochondria, a process that happens with the help of two proteins called PTEN-induced kinase 1 (PINK1) and Parkin. PINK1 coats aged mitochondria, attracting Parkin to tag the mitochondria for degradation. As Parkin’s name suggests, this tag-team has also been implicated in Parkinson’s disease. Some people develop the condition because of genetic mutations, and PINK1 and Parkin are the most common proteins affected by those mutations. When the genes are mutated in flies, dysfunctional mitochondria build up, suggesting a mechanism that may explain neurodegeneration in some patients (5). 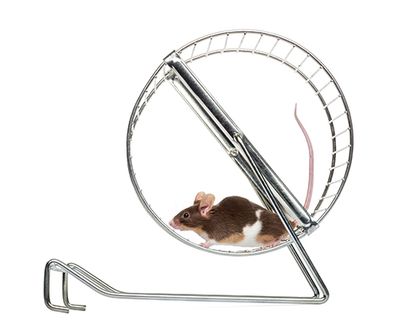 To study the effects of exercise, researchers let mice run on a wheel or treadmill.
iStock/GlobalP

To measure the effects of exercise, researchers often use mice, which means that they have to design a mouse-sized workout. The rodents hit the gym and run on spinning wheels or on tiny treadmills. The mice seem to enjoy it, Hood said; they often voluntarily run hundreds of kilometers each night.

Hood’s team “trained” mice with and without functional Parkin by letting them run on a spinning wheel for six weeks. The mice lacking Parkin had lower mitochondrial function after training and higher ROS, potentially posing a danger to cells. Exercise training also seemed to prompt mitochondrial clearing because mice that ran on the wheel had more Parkin positioned on mitochondria to clear them away when needed (6).

Back to the brain

Researchers have wondered whether exercise may similarly prompt mitophagy in brain cells and keep ROS-spewing mitochondria from hampering neuronal function. After all, neurons have their own “peculiarities,” Surmeier said.

“Mitochondrial biology … probably is very unique to neurons, which have an exquisite dependence on mitochondria,” he said, but “there are some general biological principles that span cell types.”

Studies in mouse models of Parkinson’s disease have already shown that exercise can improve not only symptoms of the disease, but also markers of mitochondrial health. Multiple studies have shown that mice with Parkinson’s disease-like symptoms that run on a treadmill intermittently for a few weeks have better mobility and higher levels of proteins required to produce mitochondria (7,8). Another study showed that running on a treadmill also increased production of mitophagy proteins in mice (9).

It’s still not clear whether the same processes happen in humans, however.

“We're really just starting to figure it out,” Hood said. “When you exercise, how are brain mitochondria affected?”

Scientists are also still disentangling how exercise affects neurons. Hood is intrigued by the idea of myokines: molecules released by active muscle cells that signal to other types of cells in the body. One study pointed out that exercise in mice increases levels of a protein that protects muscle cells from ROS, while staving off build-up of damaging proteins in neurons and improving movement and cognitive function (10). Surmeier commented that exercise may even simply improve neuronal health by increasing blood flow.

According to Surmeier, mitochondria, with their many functions, offer a promising target for Parkinson’s disease treatments. “I really think that real disease modification is going to come from combination therapies that hit more than one target,” he said.

Exercise is already strongly recommended by many doctors and Parkinson’s disease advocacy groups. “For patients with Parkinson's, exercise is something that they can be very optimistic will slow progression,” said Mark Mattson, who recently retired from his role as a laboratory chief at the National Institute of Aging. But it’s still not a cure, he noted. “It will improve their symptoms, and they'll feel better.”

Mattson encourages people with Parkinson’s disease or other chronic conditions to pursue healthy lifestyle choices, which includes exercise. Promising research on exercise also motivates the search for treatments that mimic its effects — including effects on mitochondrial production and mitophagy — without requiring movement, although these are controversial. “A traditional exercise physiologist who studies exercise will tell you that there is no pill that you can find that simulates all of the benefits of exercise,” Hood said.