BRISTOL, U.K.—Recent research out of the MRC Integrative Epidemiology Unit (MRC-IEU) at the University of Bristol could offer a new tactic to aid drug developers in picking out the most promising targets. Genetic study of blood protein levels reveals the causal effects of various proteins on diseases and disease progression, and the MRC-IEU team worked with pharmaceutical companies to establish a comprehensive analysis pipeline using the genetic prediction of protein levels to rank the most promising drug targets.

The results of their work were published in Nature Genetics in a paper titled “Phenome-wide Mendelian randomization mapping the influence of the plasma proteome on complex diseases.” This research was led by Dr. Jie Zheng and Prof. Tom Gaunt of the MRC-IEU, and other collaborators included Bristol Medical School, University of Bristol and pharmaceutical partners.

The researchers leveraged genetic epidemiology to develop a causal network of 1,002 plasma proteins on 225 diseases. As noted in the paper, “Here we estimated the effects of 1,002 proteins on 225 phenotypes using two-sample Mendelian randomization (MR) and colocalization. Of 413 associations supported by evidence from MR, 130 (31.5%) were not supported by results of colocalization analyses, suggesting that genetic confounding due to linkage disequilibrium is widespread in naïve phenome-wide association studies of proteins. Combining MR and colocalization evidence in cis-only analyses, we identified 111 putatively causal effects between 65 proteins and 52 disease-related phenotypes.”

“This analysis pipeline could be used to validate both efficacy and potential adverse effects of novel drug targets, as well as provide evidence to repurpose existing drugs to other indications,” Zheng stated in a press release. “This study lays a solid methodological foundation for future genetic studies of omics. The next step is for the analytical protocol to be used in early drug target validation pipeline by the study’s pharmaceutical collaborators. We hope that these findings will support further drug development?to increase the success rate of drug trials, reduce drug cost and benefit patients.”

The authors also shared their results on the EpiGraphDB database, which combines epidemiological and biomedical data to support mechanism discovery and aid causal inference. The database is a product of the Data Mining Epidemiological Relationships program, which is led by Gaunt and funded by the UK Medical Research Council as part of the MRC-IEU.

According to Gaunt, “Our study used publicly available data published by many researchers around the world (collated by the MRC-IEU OpenGWAS database), and really demonstrates the potential of open data sharing in enabling novel discoveries in health research. We have demonstrated that this re-use of existing data offers an efficient approach to reducing drug development costs with anticipated benefits for health and society.”

Late September brought news of another team exploring the potential of genetic sequencing in the context of complex diseases, though this time in the realm of diagnostics. Robin Hayeems of the Toronto-based Hospital for Sick Children led a study to evaluate the efficacy of genome sequencing in children with complex medical complexity (CMC) who lacked genetic diagnoses for their conditions. Children in this population “have at least one chronic condition,” according to the paper, and “Although these children compose less than 1% of the pediatric population, they account for 33% of all pediatric health care spending. A genetic cause is suspected in a large proportion of CMC, but most remain undiagnosed with conventional genetic testing.”

The researchers sequenced the genomes of 138 individuals from 49 families, and reported that “genome sequencing detected all genomic variation previously identified by conventional genetic testing and resulted in a new diagnosis for 31% of patients.”

“A total of 15 probands (30.6%; 95% CI 19.5%-44.6%) received a new primary molecular genetic diagnosis after genome sequencing,” the authors noted. “Three individuals had novel diseases and an additional 9 had either ultrarare genetic conditions or rare genetic conditions with atypical features. At least 11 families received diagnostic information that had clinical management implications beyond genetic and reproductive counseling.”

“Genome sequencing has the potential to increase the proportion of CMC for whom diagnoses are established. As a first-tier test, we speculate that genome sequencing could reduce the time and emotional burden of the diagnostic process and reduce health care system costs. Additional omic technologies, such as RNA sequencing and genome-wide DNA methylation testing, may further increase diagnostic yield in this population when used as an adjunct to genome sequencing. Beyond disease-specific therapeutics, having a confirmed molecular diagnosis will be a prerequisite to participating in gene therapy and genome editing trials. In time, we anticipate that genome sequencing will be a standard-of-care genetic test for undiagnosed CMC,” they concluded. 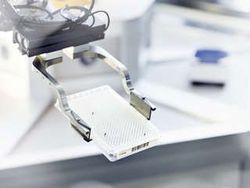