One hundred years ago, surgeon Frederick Banting and medical student Charles Best began extracting canine pancreatic secretions at the University of Toronto. They wanted to know if these secretions could treat diabetic dogs and ultimately, people. The theory wasn’t new. It had been growing in popularity since pancreatectomy experiments thirty years prior linked pancreas function to diabetes. 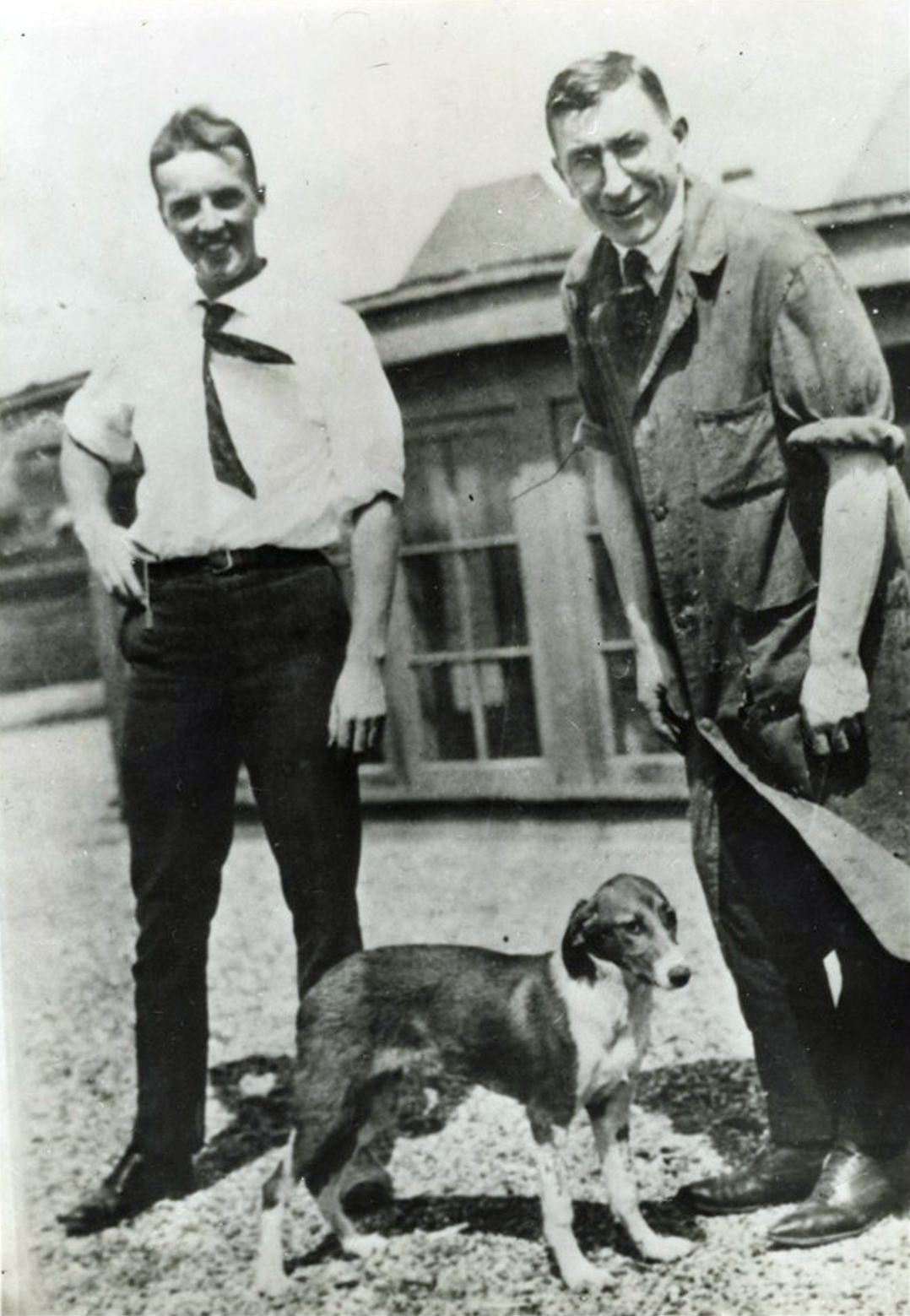 Frederick Banting (right) and Charles Best are credited with discovering insulin, along with John Macleod and James Collip (not pictured). They performed their initial experiments using canine pancreases.
Library and Archives Canada

With guidance and resources from physiologist John Macleod and assistance refining the purification method from biochemist James Collip, both at the University of Toronto, Banting and Best eventually showed that their isolated excretions reduced blood and urine glucose levels when injected into diabetic dogs. The following year in January of 1922, they successfully administered the first human injection of the substance, deemed insulin, to 14-year-old Leonard Thompson.

The discovery transformed a diabetes diagnosis from a death sentence to a somewhat manageable disease. For their efforts, Banting and Macleod shared the Nobel Prize in Physiology or Medicine in 1923. Each split their award money with their counterparts, Best and Collip, believing that their partners should have shared the award. The credit for the discovery was not only disputed between the team members - Banting and Best long held that Macleod and Collip tried to steal the glory - but by others in the scientific community who claimed that they deserved recognition (1,2).

Carmella Evans-Molina, a cell biologist and clinical researcher at the Indiana Diabetes Research Center at the Indiana University School of Medicine, vividly remembers reading the insulin discovery story in the book Breakthrough while she battled insomnia. “I devoured that book. I remember that because I was miserable; I had not slept. But I read this book and it was just so amazing.”

Evans-Molina recently co-authored a review article (3) that chronicles the history of insulin and its transformational effects on diabetes treatment, which began a few months after Leonard Thompson received the first insulin injection.

In the spring of 1922, Banting, Best,  Macleod, and Collip started a collaboration with Indianapolis-based pharmaceutical company Eli Lilly to scale up insulin production. Eli Lilly scientists developed a method using isoelectric precipitation to produce a purer form of porcine insulin that resulted in higher yields.

Once insulin was commercially available, physicians began noticing that treatment was most effective in certain patients with diabetes: those who were younger and leaner. Differences in diabetes presentation between this group and people who were often older and heavier had been documented for decades, but now scientists had a notion as to why. An article published in 1936 termed people who needed insulin to survive, but required lower doses as insulin-sensitive, and those who could sometimes treat their diabetes with diet, but were less responsive to insulin treatment as insulin-insensitive (4).

Insulin drugs were continually refined throughout the 1930s and 1940s, starting with the revelation by physician Hans Christian Hagedorn at the Nordisk Insulin Laboratories that adding protamine - a small protein previously discovered and extracted from fish sperm - would precipitate insulin into a solid form, making it less immediately accessible to the body. His work made insulin treatments longer lasting, affording patients fewer injections each day (5).

In the early 1950s, biochemist Frederick Sanger at the University of Cambridge and his colleagues used enzymes to break the insulin molecule apart and then a combination of electrophoresis and chromatography to identify the amino acid sequences of the two separate, but connected A and B chains. Insulin became the first protein ever sequenced. In 1955, the team determined the location of the disulfide bonds linking the two chains (5). 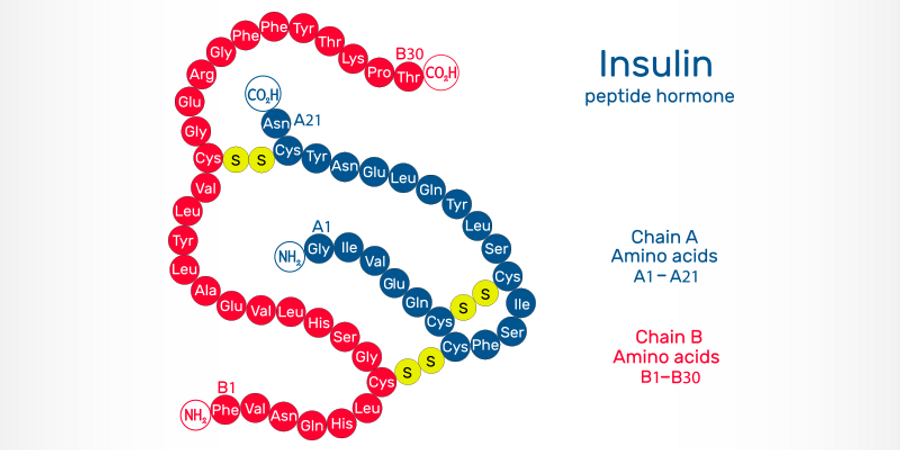 In the early 1950s, Frank Sanger and his colleagues determined the amino acid sequence and molecular connectivity of the A and B chains of insulin.
Credit: Bacsica

“For us, the two most important findings were the sequence of amino acids and the method for joining the A and B chains,” said geneticist Arthur Riggs, a world leader in diabetes research at City of Hope National Medical Center. Guided by Sanger’s molecular characterization of insulin, Riggs co-developed the first synthetic insulin in 1978.

The 1950s also brought great strides in measuring circulating insulin. By the end of the decade, medical physicist Rosalyn Yalow and physician scientist Solomon Berson, both at the Veterans Administration Hospital in the Bronx, had developed the radioimmunoassay, a groundbreaking method for quantifying immune-related small molecules (5). The technique provided proof that insulin-insensitive diabetes (now called type two diabetes) results from inefficient insulin use by the body, rather than a lack of insulin.

While Sanger and Yalow purposely worked toward understanding the insulin molecule, another significant discovery that advanced insulin utility for treating patients with diabetes was more serendipitous. Biochemist Donald Steiner at the University of Chicago made an offhand request to a medical student in 1965 for a rare, intact pancreatic tumor. Using amino acid labelling studies, Steiner identified insulin in the tumor. But the experiments also detected a slightly heavier protein that was described in the publication as “related immunologically and chemically to insulin” and could be converted to insulin enzymatically, suggesting that it was an insulin precursor. 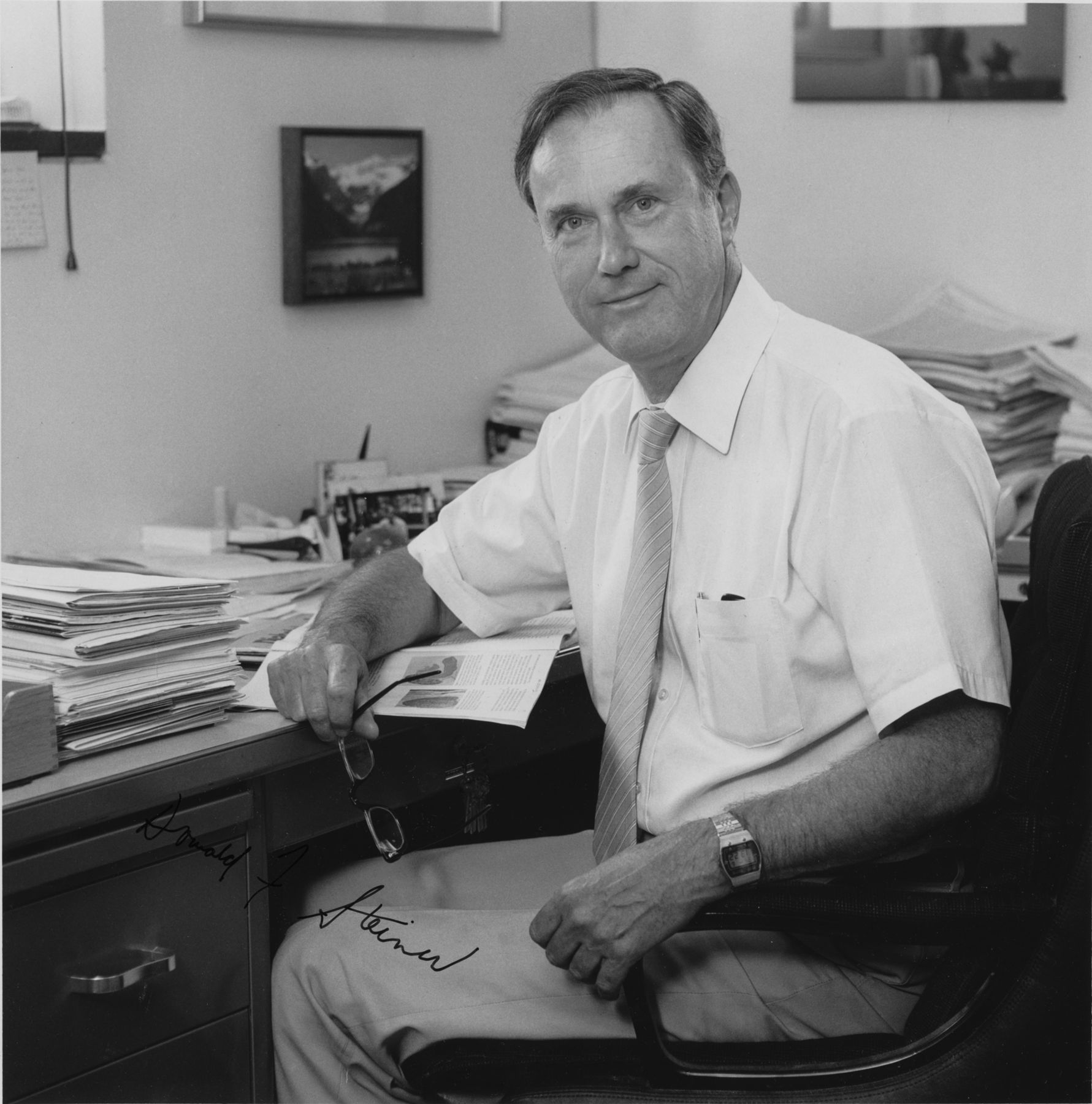 In 1966, Steiner and his colleagues proved their hypothesis by using radioactive amino acids to show that the larger protein converted into insulin in pancreatic tumor slices and in the rat pancreas. They named the precursor protein proinsulin (8).

“That was really a seminal turn of events in understanding that insulin was a prohormone that needed to be processed,” said Evans-Molina. The discovery paved the way for understanding how mutations in the biosynthesis pathway of insulin led to different molecular forms of diabetes.

At the end of the decade, University of Oxford chemist Dorothy Crowfoot Hodgkins also revealed the insulin crystal structure, showing that it existed as a hexamer (11). This discovery helped researchers later develop synthetic insulin and insulin analogs.

Although insulin treatment transformed diabetes care, its animal origins - either porcine or bovine - limited manufacturing and caused allergic reactions in a subset of patients. In 1978, Riggs successfully produced the first synthetic human insulin in collaboration with chemist Keiichi Itakura at City of Hope National Medical Center and molecular biologist David Goeddel (12); Goeddel was one of the first employees of the startup company Genentech, which was founded in 1976 and funded the venture.

The team’s original priority wasn’t to develop an alternative treatment for diabetes. “We were trying to - for the first time - use chemical DNA synthesis to make a gene from scratch,” said Riggs. The plan was to insert a chemically synthesized version of a gene into E. coli, and then trigger the bacteria to convert the gene into protein.

The team chose the insulin gene because it had the potential to help cure diabetes, but detection tests for the A chain of insulin weren’t particularly sensitive, so they selected a smaller protein called somatostatin to work out the details of the technique first. In 1977, Herbert Heyneker, a postdoctoral fellow at the City of Hope National Medical Center inserted a synthesized gene for the regulatory hormone somatostatin into E. coli and showed that it could produce the corresponding protein (11).

“We knew that if we were successful with somatostatin, we would go right ahead immediately to make insulin,” explained Riggs, who said that the team knew how important the work would be once it was completed in 1978. By 1982, the first synthetic insulin was approved by the FDA.

Although insulin could be made without an animal source, the time before it took effect in patients - often over an hour - wasn’t ideal. The active form of insulin is a monomer, but the synthetic insulin produced in the 1980s existed as a hexamer, just like stored endogenous insulin shown in Hodgkin’s 1969 crystal structure of the molecule. 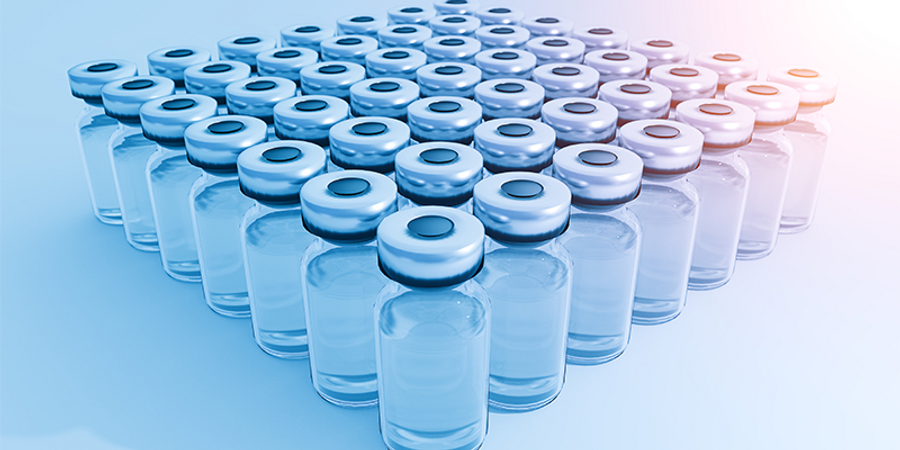 In an attempt to produce a faster-acting analog, scientists at the Novo Research Institute performed a single amino acid substitution on insulin’s B-chain in 1988 (12). By replacing the proline at amino acid position 28 with an aspartic acid, they effectively produced insulin monomers that retained their blood sugar lowering capabilities.

While the Novo Research Institute’s analog came to market in 2000, Ely Lilly marketed the first fast-acting insulin analog four years prior in 1996. Their version inverted the lysine at position 29 with the proline at position 28, both on the B-chain. Other analogs followed in the coming decade, including other fast-acting and long-acting once daily insulins.

Although insulin became more user friendly over the last hundred years, a diabetes diagnosis is still life changing, requiring costly daily insulin injections. In an effort to lower insulin costs, the FDA approved the first interchangeable biosimilar insulin this year, although the price of one vial is still close to $100. The accessibility concerns contrast Banting's sentiment; he refused to add his name to the insulin patent, which was sold to the University of Toronto for $1 to prevent a commercial monopoly (15).

In contrast, significant progress has been made toward freeing people with diabetes from daily injections. A meeting called Obstacles and Opportunities on the Road to Artificial Pancreas: Closing the Loop held in Washington, D.C. in December 2005 planted the seed that recently changed diabetes treatment options.

Boris Kovatchev, a mathematician at the University of Virginia, remembers the meeting well. There, experts debated the prospects of creating a pump connected to the body to automatically supply a responsive stream of insulin. “There were opinions back and forth. Some people were saying this is not doable. There were others of the opposite opinion,” said Kovatchev, who favored the idea.

Kovatchev began working on an algorithm to control automated insulin injections based on blood glucose levels, an achievable goal due to the advent of continuous glucose monitoring in 1999. “Until then, only occasional glucose monitoring was possible,” said Kovatchev.

In 2016, the FDA approved an artificial pancreas called MiniMed 670G, followed in 2020 by the Tandem Control-IQ, which employs Kovatchev’s algorithm (16).

In the last 100 years, the study of insulin as a treatment for diabetes has altered the lives of countless people, defined new fields of research, and propagated further discovery.