Fabry disease is an inherited lysosomal disorder caused by deficiency of the enzyme alpha-galactosidase A (GLA). Reduced or absent levels of GLA lead to accumulation of disease substrate, cellular dysfunction, and organ damage, which results in the clinical manifestations of the disease.

Amicus, in collaboration with the gene therapy program at the Perelman School of Medicine at the University of Pennsylvania (Penn), is developing a novel gene therapy for Fabry disease that combines the Amicus protein-engineering expertise in Fabry disease with Penn’s AAV gene transfer technologies.

AT-GTX-701 also demonstrated significantly greater lyso-Gb3/GL-3 substrate reduction across all Fabry disease relevant tissues, including the dorsal root ganglia, kidney, and heart. Reductions at the low dose of the engineered hGLA were equal to or greater than the reductions observed at higher doses with wildtype hGLA.

Dorsal root ganglia are affected by Fabry disease, and associated with neuropathic pain. AT-GTX-701’s stabilized transgene provided the first evidence for dorsal root ganglia storage reduction in a Fabry mouse model treated with an AAV gene therapy. This validates the potential of the platform to design constructs that enhance proteins across multiple lysosomal disorders. GMP manufacturing process development is currently underway, as well as additional preclinical studies and studies that could enable an Investigational New Drug application to the FDA.

“These very important preclinical results validate our capabilities to develop engineered proteins via a gene therapy that can result in superior substrate reduction compared with a wildtype transgene,” reported Dr. Hung Do, chief science officer of Amicus. “This is the second program in our collaboration with Penn that has demonstrated the potential advantages of optimizing the target protein in these disorders, and may be applicable to other lysosomal disorders as we continue to combine our understanding of the molecular basis of these diseases and expertise in protein engineering, together with Penn’s vector engineering expertise, to develop novel gene therapies.”

Amicus isn’t the only company that presented results in Fabry disease at WorldSymposium 2021. Protalix BioTherapeutics Inc. and Chiesi Global Rare Diseases presented final results from the Phase 3 BRIDGE clinical trial of pegunigalsidase alfa (PRX-102), an investigational therapy in development for the potential treatment of Fabry disease.

“PRX-102 (pegunigalsidase alfa) is an enzyme replacement therapy (ERT) that is designed to treat Fabry disease by providing an exogenous source of the lysosomal α-Galactosidase-A enzyme,” Giacomo Chiesi, head of Chiesi Global Rare Diseases, tells DDN. “Similar to existing ERTs, PRX-102 is mediated by receptors on the plasma membrane of cells following IV infusion. However, PRX-102 is produced by plant cells. As a result, it does not enter cells in the body via the mannose-6-phosphate (M6P) receptor as seen with ERTs produced using mammalian cells.”

“PRX-102 has been shown to remain active an average of five times longer than agalsidase alfa (Replagal) and agalsidase beta (Fabrazyme) under lysosomal-like conditions. The PEG molecules in PRX-102 also mask epitopes of the enzyme that may be recognized by the immune system,” adds Chiesi. “In addition, the chemical modification of PRX-102 may reduce cross-reactivity to any anti-drug antibodies that may have been produced by previous ERT treatment.”

The Phase 3 BRIDGE clinical trial was a 12-month open-label, single-arm switchover study that evaluated the safety and efficacy of pegunigalsidase alfa 1mg/kg infused every two weeks, in up to 22 Fabry patients previously treated with agalsidase alfa for at least two years and on a stable dose for at least six months. The data showed substantial improvement in renal function in both male and female patients who were switched from agalsidase alfa to PRX-102. Twenty out of 22 patients completed the 12-month treatment duration, 18 of which opted to roll over to a long-term extension study and to continue treatment with PRX-102.

In the BRIDGE study, the mean annualized estimated Glomerular Filtration Rate (eGFR slope) of the study participants improved from -5.90 mL/min/1.73m2/year while on agalsidase alfa to -1.19 mL/min/1.73m2/year on PRX-102. Following the switch to pegunigalsidase alfa, there was a decrease in patients with progressing or fast progressing kidney disease, and the majority of patients achieved a stable status post-switch.

Chiesi notes that the company has filed a Biologics License Application with the FDA for PRX-102. It was accepted and granted Priority Review designation, and its Prescription Drug User Fee Act date is set for April 27 of this year. 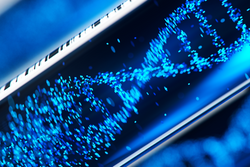 BRIDGE-ing the gap to a new treatment

BRIDGE-ing the gap to a new treatment